The most direct path to growing human understanding

Great deck, could be even better

This collection of Anki decks for Japanese learners, spread over 10 parts, is an absolute must for beginners. It includes standalone expressions as well as phrases with said expressions. It also contains images and, most importantly, audio produced by native speakers. This is where it really shines and makes it all worthwhile.

Having said that, the lack of linear progression throughout the decks is pretty bad. You learn the common expression 素晴らしい (subarashii) only by the time you get to deck 7! This happens often and feels like a wasted opportunity to make progression more meaningful.

Also I take issue with the fact that there are so many lent expressions from English (the so-called garaigo). Those are often nearly identical to the English words and don’t really need to be memorized with flashcards since they are so easy.

All in all, it’s a fun deck to churn through and I can recommend it!

How did early humans learn languages without Anki?

It’s more customizable than others out there, free as in freedom and as in cash (at least the Android version), and, most importantly, it works wonders for learning and memorization.

One thing that could be improved is allowing plug-ins to extend functionality of the app, like the desktop version does. Also, some actions can only be done via the desktop program, which makes it a second-class citizen for me. The fact that it can sync seamlessly across devices makes it a smaller problem, however.

No handholding past this point

Tobira is one of the most often recommended Japanese textbooks for pre-intermediate learners in communities like /r/LearnJapanese for good reason. It is a great book with very useful grammar explanations and examples which themselves use grammar points previously learned. The essays contained in the book are interesting and not overly difficult.

Also, the accompanying official website offers extra resources like audio and even pre-made Anki decks! It’s very convenient, and it would be even better if the decks contained example sentences as well instead of isolated words.

This book definitely does not hold your hand with English translations and it feels like a shock to many students who recently finished Genki II, and rightly so. But if you bear with the initial discomfort, you’ll see your Japanese visibly improving.

I have only two main problems with it: the grammar notes section is way too far away from the reading material, which is a nuisance. Also, the vocabulary list sometimes contains words that are too basic and some more complex expressions used in the texts don’t make it into these lists for some reason. Apart from that, it’s a great book and I feel fortunate to have stumbled upon it. Don’t let the lack of English scare you, embrace it!

Excellent free resource for learning a language instead of memorizing it

Language Transfer is one of those projects that represent the Internet at its best: a passionate individual (Mihalis Eleftheriou) and a community of volunteers creating free learning resources for the whole world. Mihalis may well become known as the Sal Khan of language learning, but unlike the well-endowed Khan Academy, the project is entirely funded through small donations, primarily via Patreon.

The LT courses are audio lessons. Mihalis interacts with a student. As you listen, you pause at relevant points to provide your own answer, then compare it with the student’s (and, if different, with Mihalis’ response). There are courses of different degrees of completion in French, Swahili, Italian, Greek, German, Turkish, Arabic, Spanish, and English (for Spanish speakers).

In effect, a 10 minute audio file may take you 15-20 minutes to complete. I don’t recommend listening to these courses in the background. They deserve your undivided attention. The courses are carefully edited, so it never feels like you’re wasting time.

I’ve completed the 90 track “Complete Spanish” course and can say that, of all the language learning resources I’ve used in the last year (Duolingo, Lingvist, Mango, and various books), it’s been the most helpful one in helping me understand the language rather than just memorizing words or attempting to intuit rules on my own.

Learning a language primarily through memorization can be frustrating. It takes forever to feel like you’re making progress, and irregularities can quickly break your memorization patterns. Instead, Mihalis’ approach is to help you see the connections between languages, and the rules and patterns within them.

This can provide immediate payoff. For example, in the “Complete Spanish” course, Mihalis spends some time early on showing how, in thousands of cases, Spanish words can be constructed from English ones that share the same Latin origin. Rather than spending a lot of time building the initial vocabulary, Mihalis then uses many of these words to construct the first sentences.

Where possible, he explains why exceptions and irregularities exist: vowels that got swallowed over time, words that were transferred into Spanish from a different language like Arabic or Greek, accents that help to avoid ambiguity. He also points out negative language transfer—cases where we may be tempted to mistakenly use rules we’re familiar with. Listen to this example:

Advice like this is incredibly helpful and often omitted in other learning resources. Similarly, Mihalis adds important context about the regional differences (“you may hear it said this way, or that way”). When dealing with difficult parts of the language, like the subjunctive in Spanish, he helpfully reminds us that these are the exciting moments of learning a language: when you become able to express something in a wholly new way.

What’s so powerful about this approach is that it reflects the reality of how languages have spread and developed over time, through human migration, trade, conquest, and local customs. Seeing the connections between languages like English, Spanish and Arabic makes it easier to recognize jingoism and cross-cultural prejudices for what they are.

I recommend Language Transfer without any reservations, by itself or as a companion to other learning resources. You can play the audio files on the site or download them, including via official .torrent files (here’s the Spanish one). And if you get value out of it, consider making room in your donations budget for a monthly gift.

A great starting point for learning a new language

Founded in 2009 by Luis von Ahn of reCAPTCHA fame, Duolingo has quickly become the most popular free language learning tool, reaching some 150 million users today. Is it any good? The short answer: yes, but if you’re serious about learning a language, use it in combination with other resources.

After you sign up, the core experience is a set of interactive exercises focusing on different areas of a language: basic vocabulary, sentence structure, past and future verb tenses, and so on. Learning takes place along a sequential path, but you’re encouraged to repeatedly practice previous lessons.

This variety keeps the lessons interesting, though even after months of use, I still sometimes translate when I’m supposed to be transcribing. The mobile app minimizes the amount of typing by letting you “tap together” sentences rather than writing them, easing the difficulty a bit in favor of keeping things user-friendly.

One huge plus is that Duolingo is generally pretty good at accepting multiple translations for the same phrase. Sure, users still complain about correct translations not being accepted, but compared with language learning applications I’ve tried in the past, it handles the very large solution space pretty well, at least in Spanish.

Speaking of user comments, every exercise is linked to a discussion forum, which often contains helpful tips, both from other learners and native speakers. 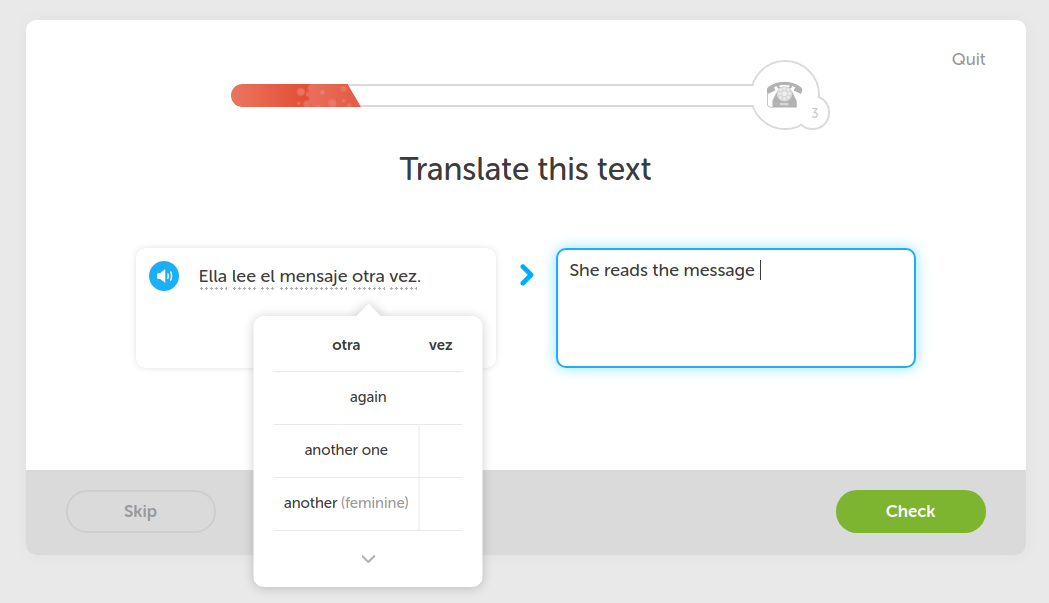 A typical Duolingo lesson will include translation exercises like this one. The UI is streamlined so you never really get stuck — you can always quickly refresh your memory through built-in hints.

Duolingo is well-funded and its product designers and engineers routinely launch new experimental features. For example, as of this writing, the “Labs” section features Duolingo Stories, which are interactive, spoken short stories where you complete sentences as you go. The iOS app, meanwhile, is currently experimenting with chatbots.

This is all well and good, but the core product isn’t receiving nearly as much love. Aside from the exercises, there’s very little context that helps you to learn about grammar or the internal patterns of the language you’re learning. Some lessons include some instructive text, which tends to be both minimal and not very well-written. And once you’re done with the lessons (which, for Spanish, took me a few months), you’re still at very limited proficiency with nothing else to do but to practice or to try more “Labs” projects. 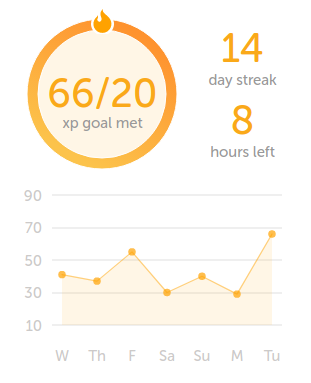 Gamification is a core part of the Duolingo user experience. The site tracks your daily usage, rewards you for completion of lessons, and sends you (genuinely helpful) reminders to keep at it.

On the positive side, the gamification — daily reminders, XP scores, levels, gemstones, etc. — does work to develop a language learning habit. Even aspects that may seem excessively silly (the mobile app lets you dress the Duolingo mascot in fancy clothes with the gemstones you’ve earned) do increase the user’s emotional investment in the learning process.

The business model is advertising (earlier plans to monetize translations notwithstanding), and the company has so far generally maintained a “not evil” reputation. You can even turn off the ads by paying a monthly fee, though most users will probably not find that to be worth it. With a high valuation and repeated injections of huge amounts of funding, let’s hope Duolingo continues to follow the straight and narrow.

I recommend Duolingo wholeheartedly — just don’t expect that it’ll be enough to get you from novice to pro. Use it in combination with books, videos, or free courses like Language Transfer. If you live in a big city, face-to-face Meetup groups can also be a great way to find other language learners and native speakers.

Powerful dictionary, built on the shoulders of freedom

Jisho is an excellent online dictionary for English speakers. One of its most amazing features is that you can basically throw at it anything, and it will try to help you: voice, drawings, English words, Japanese words (either in any Japanese writing system or using the Latin alphabet) and even full phrases!

But for this reviewer, perhaps this most interesting aspect is how Jisho pulls together a bunch of free culture projects to deliver an amazing product. It uses the JMdict, Kanjidic2, JMnedict and Radkfile dictionary files (CC BY-SA), Tatoeba example sentences (CC BY), the System of Kanji Indexing by Patterns, or SKIP (CC BY-SA), kanji stroke order diagrams from KanjiVG (CC BY-SA) and last but not least, Wikipedia (CC BY-SA). Jisho is a great testament to the power of a free commons.

Having said that, it is with a heavy heart that one realizes that Jisho itself it not free-as-in-freedom. The developers have freed some related tools used in the making of the website, but not the thing itself, which is quite disappointing. It’s that one dent that forbids this reviewer from giving it a full five star rating in an otherwise impeccable project.