History drama that tries to juggle too many balls at once

We. The Revolution is a fictionalised historical drama set during the Reign of Terror in revolutionary France. You play as an upstart judge, and with your ruling power, you will decide over life and death. Who is innocent? Who is counter-revolutionary? Who goes free? Who gets sent to the gallows?
During these uncertain times, you want to make it big, but you also have to protect your family, and yourself, of course.

The core gameplay loop revolves around different tasks that you have to do every day. You usually start with judging over a case in court, part-take in the execution (if that was your ruling), and manage relations with your family and friends. This is interspersed with the occasional story event. And over time, the daily routine gets more complicated. After a while, you even command a militia to defend and expand your territory within Paris. You even get the ability to plan conspiracies against your competitors for power over the city.

The court sessions are clearly the main attraction. You are given an investigation report regarding the person on trial. From this report, you can use the contained clues to unlock and extract statements from the defendant or a witness. Interestingly, you can choose which statements to pursue, and different ones will influence the jury’s opinion of the case. Theoretically, you could convince the jury that a totally guilty person is actually innocent just by choosing all the statements that paint them in a positive light.

Different sections of Parisian society will have expectations regarding your rulings. You will have to balance the goodwill of your family, the common people, the revolutionaries, and the aristocracy. If a faction gets too displeased with you, they’ll send an assassin after you—game over.
These groups are almost always at odds. There comes a point in the game where you always calculate the ramifications of your ruling beyond the defendant’s actual guilt. This is one of the very intriguing elements of the game. It shows you how you are just as much politician as other characters in the game, even though you are a judge by profession.

These small moments work well, and it is all the more intriguing to see how you climb the hierarchy of power in the game over time as your rivals get eliminated (often by you)—really showing how the Reign of Terror got its name. However, it is a shame how few of these moments are in the game overall—actually, I pretty much named them all.

Huge parts of this game are clearly inspired by Papers, Please, which I remember as a focused and fun exploration of the game’s setting by playing a bureaucratic cog in the machine. We. The Revolution is not that. More and more responsibilities get added over time until the court sections seem like just another side attraction. It’s very unfortunate because while they don’t have much depth, they are the most interesting and deep aspect of the game. But as time goes on, you will spend more of it on positioning your militia on the map, convincing others to aid you in your conspiracies, and so on.
Over the hours of sticking with the game, I gradually lost interest. Once chapter three came about, I quit. The narrative revelation at the end of chapter two was simply not enough to keep me playing.

The only other positive thing that I can say about this game is that its art style is striking and fitting. Pixel art seems to be exhausted in its aesthetic capabilities at this point, so this mosaic art style was genuinely refreshing and looked great. It gives the game a simultaneously sharp but abstract look. Very fitting, I think, and I hope more games will use it in the future. 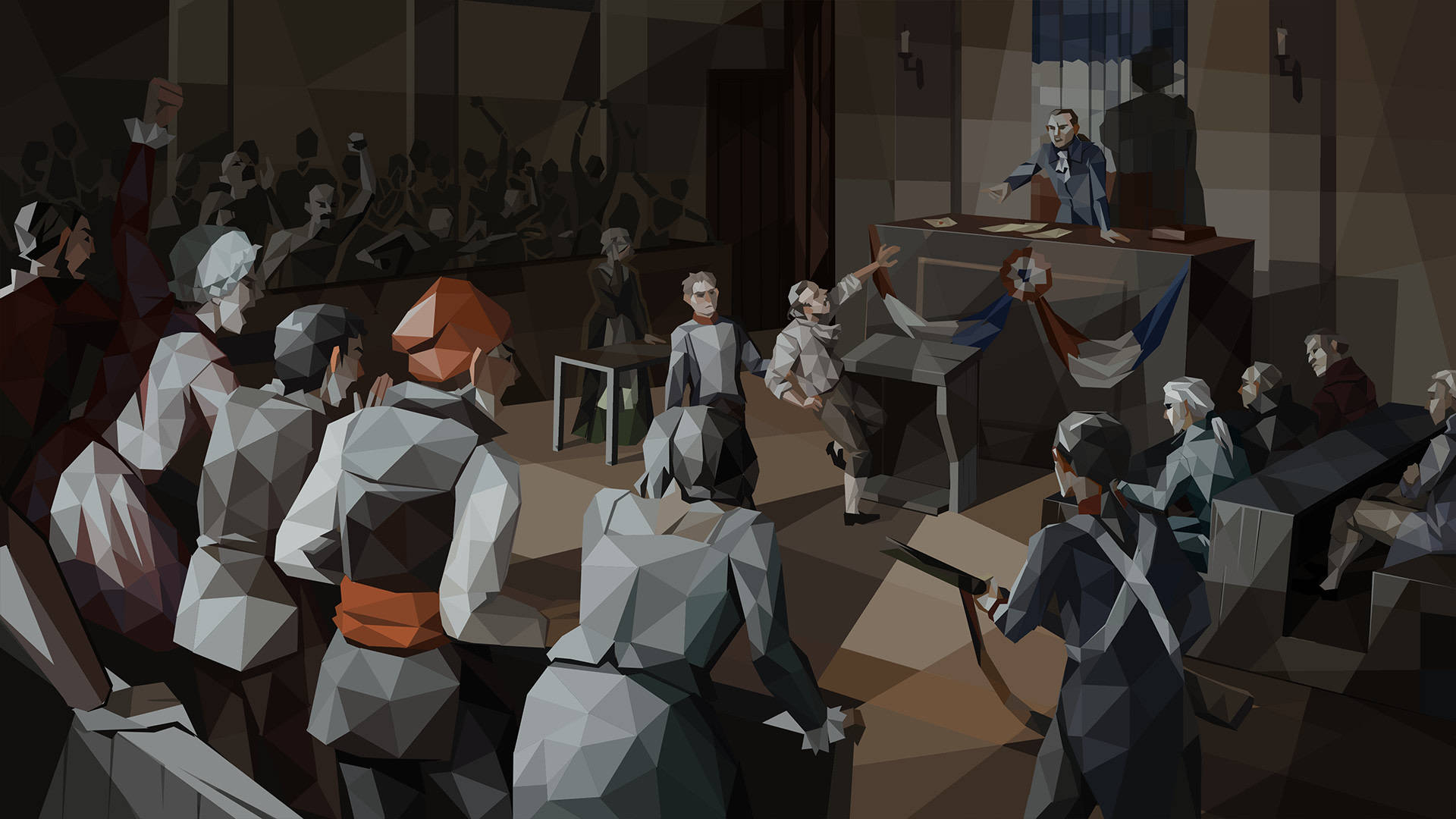 Otherwise, the game gets bogged down by many weird technical issues. The game plays like a not so great mobile port. In fact, most moments in the game seem almost designed for a touch screen. I was surprised to find out this game wasn’t released on the iPad or a similar platform.
The game takes quite a bit of time to transition from one part of the daily routine to another, when really, for a 2D game, they should be instantaneous.

The UI has a weird bug where during questioning of a defendant you can’t fully scroll up the list of questions. Generally, the UI design is inconsistent and lacks indicators for navigation. More than once was I stuck in some menu for several minutes figuring out how to make the game do what I wanted it to.
Another thing regarding the UI: the text is really small, and there is no option for increasing the font size. To play this game on the Switch in handheld mode, I had to figure out how to use the Switch’s accessibility zoom feature.

I’m really let down. This should have been exactly my type of game, but its lack of focus and unnecessary technical quirks turn it into a test of patience instead of an exploration of the psychology of the leaders of a revolution during uncertain times. There are hints of a much better and good game present during chapter one, and it is a shame it can’t live up to any of that.