Howling at the stars about fates unwritten

Cardinal Cross is a choice-driven visual novel about a space-traveling scavenger named Lana Brice, who unexpectedly finds herself caught up in a galactic conflict of an astrological nature. The game was written by Roman Alkan and published through her small indie studio LarkyLabs under its ImpQueen brand.

In this universe, predictions derived from the movement and position of celestial objects are as fictionally real as the Force in Stars Wars, or as the fungal excretions of sandworm larvae that make interstellar travel possible in Dune. In most other ways, Cardinal Cross employs familiar sci-fi tropes: cybernetic implants, space rebels, robots and AI, the works. 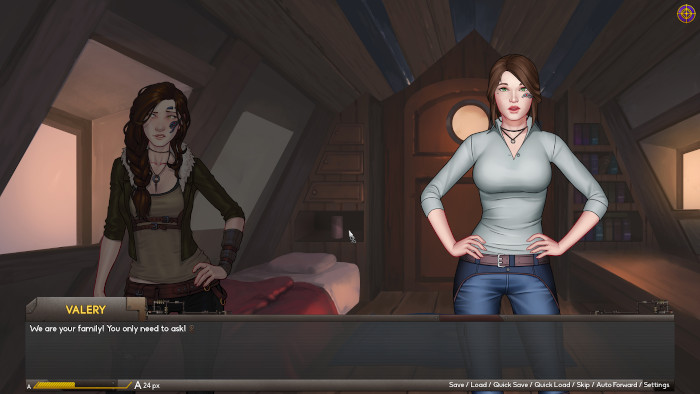 Lana Brice and her friend Wiz, the Mechanic, are part of group of planets known as the Raiders. These folks have gotten the short end of the stick in a conflict with another group known as the Morai System, and they’re generally treated like colonies.

In a black market transaction, Lana and Wiz come in contact with a rogue intelligence agent of the Morai, who is trying to purchase an artifact from them. Most people have cybernetic implants, but this guy is enhanced to the point of almost losing his humanity. He is dangerous, and so are his former employers.

Soon enough, Lana is caught up in a web of conspiracies and plots involving multiple factions. At its center is an astrological supercomputer which the Morai elite use to maintain power and control. Its predictions are not perfect: so-called “howlers”—some humans, objects, planets—elude it completely. (I’m guessing the term is a reference to errors and aberrations rather than monkeys.)

As you might expect from its astrological theme, much of the story revolves around whether our fates are our own to write if the stars seem to already foretell what they are. Thankfully, the story never gets bogged down in sophomoric arguments about free will—it plays out more viscerally through Lana’s choices. That is to say, your choices. 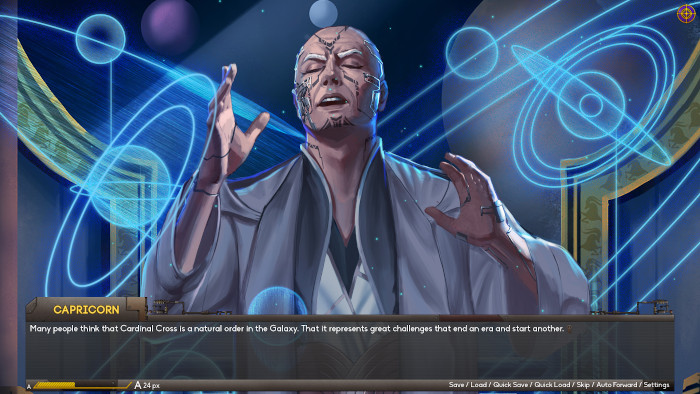 One way or another, Lana’s fate is in the stars. (Credit: LarkyLabs. Fair use.)

Throughout the story, you get to make more than 100 decisions, typically about things to say, sometimes about things to do. A lot of them have a negligible effect, but you can romance three different characters, influence Lana’s personality, and achieve multiple endings.

The game signals the most important choices with a sound effect, and it makes it clear when you have the option to embark on a romantic adventure. It also displays the effect you have on others (“[name] is annoyed”, “[name] is amused”). These messages are sometimes off-point and immersion-breaking, but you can disable them entirely.

Cardinal Cross is not voice-acted, but it is exceptionally well-illustrated. Not only does it have beautiful character art, it has a ton of it.

There are 50+ side characters, and most of them are visually well-differentiated. It includes 70+ full-screen graphics during special events (“CGs” in visual novel lingo). In case you’re wondering: the graphics for the romantic outcomes are about as tame as what you’d find in a PG-rated movie.

The game has a soundtrack by Jeaniro, which creates suitable ambience without distracting from your reading experience. During the story’s most dramatic moments, the music becomes boisterous or tense, generally fitting the text well.

The story is substantive, but it doesn’t overstay its welcome. I reached an ending which suited my choices well in about 6 hours. After I checked out one other ending with the help of a guide, my total playtime added up to 8 hours.

A good yarn with a few flaws

Roman Alkan’s world-building helps to set the stage effectively, even if the introduction of the in-universe terminology is a bit tedious at first. I had three main issues with the writing:

Know that it’s a violent game. Both Lana and the other characters may hurt—and kill—people they come across. Cardinal Cross does not explore its darker themes with the same sensitivity some visual novel writers (like Christine Love) bring to their work; here, transgressions don’t always have the reverberations you would expect.

All in all, though, it’s a good yarn. It riffs on the astrology theme in a way that I’ve personally not encountered in sci-fi (astrology is still annoying, don’t @ me!). It’s a great example of the art form, bringing graphics, music and writing together into a coherent whole. I would enjoy reading about the further adventures of Lana Brice, and will definitely pay attention to ImpQueen’s future works.