Homo sapiens spent 99% of its existence on Earth in a hunter-gatherer lifestyle. So it’s perhaps no surprise that the game Don’t Starve, where you gather twigs and berries and set traps for rabbits, has an incredibly addictive quality to it. Released by Canadian indie studio Klei Entertainment in 2013, Don’t Starve has since spawned a multiplayer variant and a fair amount of downloadable content (DLC).

The base game will keep you busy for a while. It combines roguelike elements (procedurally generated worlds) with crafting, farming, a day/night cycle, seasons, and many different ways to die.

For starters, there’s darkness itself: if you spend more than a few seconds in total darkness, you will die from mysterious causes. If you don’t eat, you starve (duh!). If you don’t find ways to preserve your food, it slowly spoils in your inventory. If you don’t sleep, you slowly go insane. Every few nights you get attacked by ever-growing packs of hounds. During winter, you may freeze to death. Or you could get killed by bees, frogs, spiders, giant birds, tentacles, pengulls, beefalo, did I mention tentacles, and myriad other creatures. 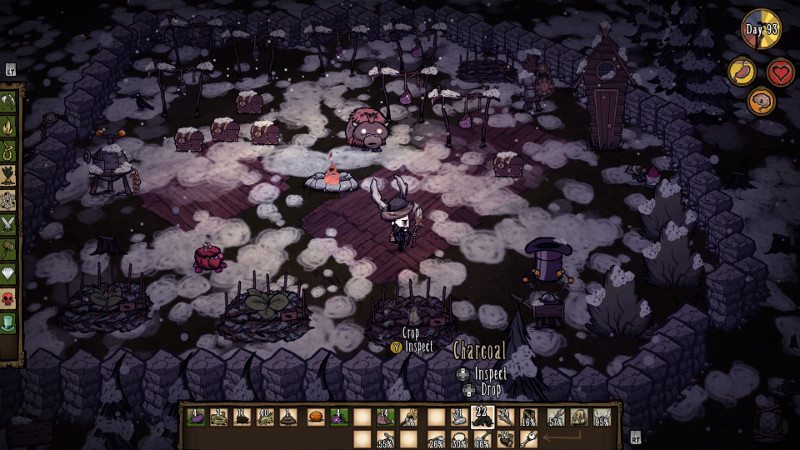 A small walled camp with a tamed baby beefalo, farms, and drying racks for meat. (Credit: Klei Entertainment. Fair use.)

Still, after a few early deaths (and maybe after reading a few spoilers online), the game becomes surprisingly chill. Most creatures don’t attack unless provoked or approached, and you can craft yourself a little fortress and prepare a good defense against the regular hound attacks. Just as you’ve gotten the hang of it, Don’t Starve lures you into Adventure Mode, where you get to face off against the game’s antagonist, a pinstripe-wearing half-demon named Maxwell, in extra-hard challenge worlds.

You also quickly unlock most of the game’s playable characters, all with different skills and weaknesses. So far I’ve mostly played as Wilson, but I look forward to playing as creepy-girl-with-the-dead-sister Wendy or as Woodie, a lumberjack with a talking axe.

As you may have guessed by now, the game does not go for realism: its art style is influenced by Tim Burton, and its world is littered with magical items and the means to craft them. You will also encounter sentient pig creatures living in little houses, who can be tamed to do your bidding, or brutally killed and turned into football helmets and meat.

Procedural generation works best if it creates worlds that feel like places worth visiting, not just empty rooms and corridors. Each game world in Don’t Starve is a place to be navigated: where are the rocks to mine, the berries to harvest, the trees to fell? As you survive days and nights, your brain starts to map out these game worlds just like it does any other place.

Don’t Starve is a masterclass in game design, with excellent controls and menus that make the complexity of its mechanics a joy to manage. While I didn’t find the artwork very appealing at first, it quickly grew on me, thanks to lighting and sound effects, cute animations and funny dialogs, and the living rhythm of the game’s plants and creatures.

The game has its dull moments where you just gather resources or wait for night to turn into day. But these quiet minutes also present opportunities to organize your inventory, to craft a needed item, or to plan out the next day.

Don’t Starve is available for virtually every platform now (including Linux, Android, and Nintendo Switch), and you can regularly find the Steam or GOG version on sale for $5 or less. Developer Klei Entertainment also deserves credit for publicly renouncing “crunch time” and pledging not to overwork its developers. I highly recommend the game, and I look forward to checking out Klei’s other titles, nearly all of which have received very favorable reviews.