Gripping story about the role of AI, packaged as an imperfect game

Bad writing grasps at your attention like a man grasping at straws; great writing seizes your attention and doesn’t let go. Eliza is a computer game, and its writing is firmly in the latter category; it has a story to tell, and the moment it begins telling it, you want to know how it ends.

This is a visual novel, a genre in which you typically click your way through an illustrated story and make a few choices along the way. You play as a young woman named Evelyn who, after a period of depression and burnout, starts a job working for an AI-based counseling service called Eliza (in homage to the 1966 chatbot of the same name).

Evelyn works as a proxy, a human face for the AI. Proxies are required to faithfully read their lines to customers—”don’t deviate from the script!” Some of the people Evelyn meets as a proxy are looking for treatment, some just want a person (or a machine, as the case may be) to talk to. The game uses this conceit to explore deeper questions about the role of technology in a capitalist society.

As an undercurrent, Eliza explores the culture of the tech industry. There’s the startup founder with the grand vision of “ending human suffering”, who seems to harass every female staff member he hires. There’s the idealistic young engineering manager who is starting to raise questions about the privacy practices of his employer. And there’s Evelyn’s friend Nora, a former programmer who is now freelancing and making electronic music. 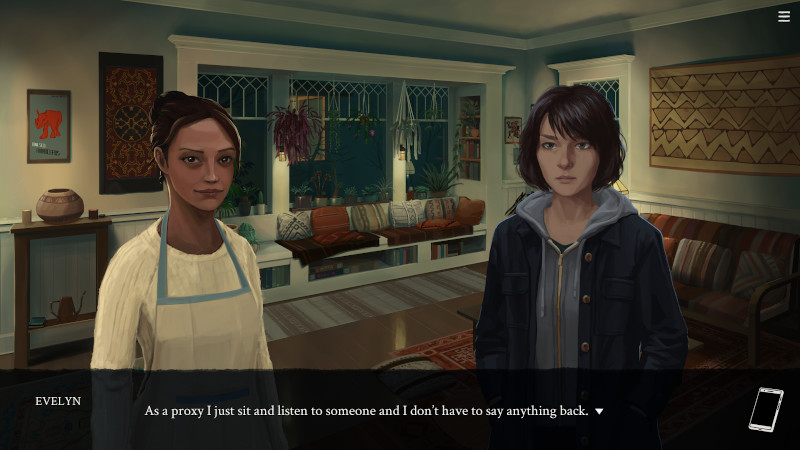 The game offers small choices throughout, but their effect tends to be very limited. In fact, when you act as the AI’s proxy during counseling sessions, the game deliberately takes away your choice to say anything other than the dialogue generated by the AI, occasionally forcing you to say “I’m sorry, I don’t understand the question” as if you yourself were an algorithmically constrained chatbot. It’s player frustration in service of the story.

At the end of the game, Evelyn must make a defining choice, which leads to one of several endings. The game does not punish or reward you for your choice with a “good” or “bad” ending; instead it concludes the story in a manner that suits the character you’ve chosen to become.

Eliza took me about 6 hours to complete, and that includes exploring the different endings. The dialogue is fully voiced by a cast of experienced voice actors. Backgrounds and character sprites are visually pleasing, but the graphics are completely static—facial expressions or poses don’t change, even when the dialogue suggests that they should.

Eliza falls a bit short on the “visual” side of being a visual novel due to its use of static images; as a game, some players will find its linearity and long sequences without significant player choices overly limiting. But as a story about the role of AI in society, it is gripping and timely. If the theme interests you, I recommend the game without reservations.