In the late 19th century, as the United States fully consolidated itself and its territory (through war and ethnic cleansing), its elites began to realize openly imperial ambitions. These ambitions reached a fever pitch in the Spanish-American War, which led to the US establishing control over Puerto Rico, the Philippines, Guam, and (nominally independent) Cuba.

When Smedley Butler, the son of an influential Pennsylvania family, joined the US Marines in 1898, he was caught up in the war fever of the time. But instead of fighting the Spanish, he soon found himself helping to police America’s empire on behalf of its most powerful economic interests.

Decades later, Butler, now a Major General, started to write his own script. In 1933, he alleged that he was invited to take part in a conspiracy among wealthy businessmen to overthrow U.S. President Roosevelt and install a dictator.

It became known as the Business Plot. A congressional committee concluded that “there is no question that these attempts were discussed, were planned, and might have been placed in execution when and if the financial backers deemed it expedient." Nobody was prosecuted.

In his final years, an increasingly radical Butler gave fiery speeches and penned a short book called War is a Racket. It contains the following passage:

I helped make Mexico, especially Tampico, safe for American oil interests in 1914. I helped make Haiti and Cuba a decent place for the National City Bank boys to collect revenues in. I helped in the raping of half a dozen Central American republics for the benefits of Wall Street. 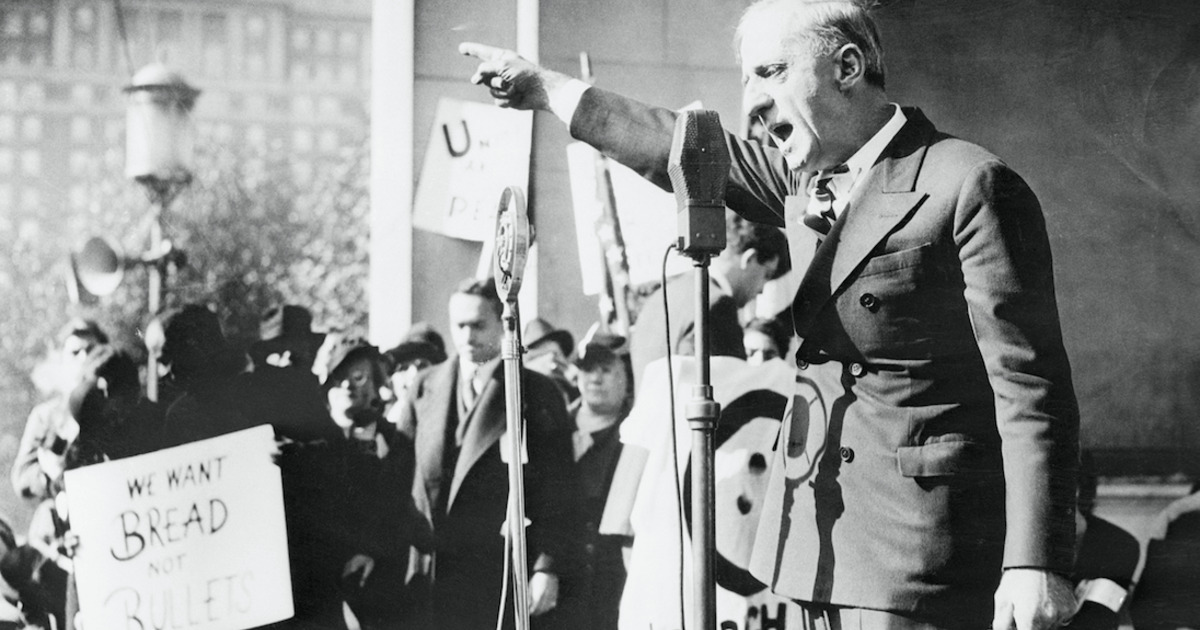 Late in his life, Butler denounced war and empire, and fought for veterans’ rights. (Credit: Bettman/Getty Images. Fair use.)

For American journalist Jonathan Katz, Butler’s life presents a lens through which to view the history of American imperialism, and its modern legacies. In Gangster of Capitalism, Katz traces Butler’s career in the military and his stint as Philadelphia’s “Director of Public Safety”, a role in which he waged a brutal war on crime in the city.

Katz makes it clear that Butler, in spite of his Quaker upbringing, committed truly horrific and violent actions, and often rationalized them through the pervasive racism of the time. As part of the nearly 20-year-long occupation of Haiti by the United States, Butler instituted de facto slavery to build up the country’s infrastructure.

Unlike the opaque Business Plot, the corporate interests that profited from these endeavors and drove US policies are well-documented, from bankers to landowners to oil companies. Franklin Roosevelt himself pursued personal agriculture investments in Haiti while helping direct its occupation as Assistant Secretary of the Navy.

In each chapter, Katz describes the modern legacy of American imperialism, including by quoting Haitians, Filipinos, Chinese, and others he has met. While Americans have forgotten the little they have ever known of this history, the citizens of these countries have not. Katz’s travelogue enriches the book and makes this history tangible.

Gangsters of Capitalism is an accessible, informative and engaging book. At no point does Katz turn from facts to polemic. He gives clear-eyed accounts of the brutal regime of Nicaragua’s leftist autocrat Daniel Ortega, and the imperialist ideology of China under Xi Jinping. The book is a critique of empire, not an anti-American screed.

It is also a timely book, as another imperialist power, Russia, wages a war of aggression against neighboring Ukraine. What role should Western powers play today to counter such naked brutality? Can military alliances like NATO protect the peace in the 21st century? What alternatives are there?

The invasion of Ukraine marks a new chapter in world history, and we all benefit from remembering previous chapters—including America’s own brutal imperial history—to navigate the moral landscape now before us.