As usual, I’m late to the party. Gone Home caused quite a stir when it came out in 2013. Many critics and players loved it; some angry gamers hated it, some of that hatred helped fuel the misogyny horror show known as Gamergate. Today, Gone Home is available for Windows, Linux, Mac, Switch, PS4, Xbox One, iOS, and your toaster. It remains a polarizing game, and it’s not hard to see why. You can finish the game in 2-3 hours; it features no conventional “puzzles” or action, and one of its central themes is a lesbian coming-out story.

Gone Home is a first-person exploratory game. It’s the mid-90s, you’re 21-year-old Katie Greenbriar, home from your big European adventure, only to find that your parents and sister are not there. What happened? While a storm rages outside, you walk from room to room of the “psycho house” your family moved into, trying to find clues to their disappearance. The home is littered with paper—handwritten notes, letters, photographs, receipts, books, post-its, and so on. Some notes lead to audio logs that add to the evolving story. 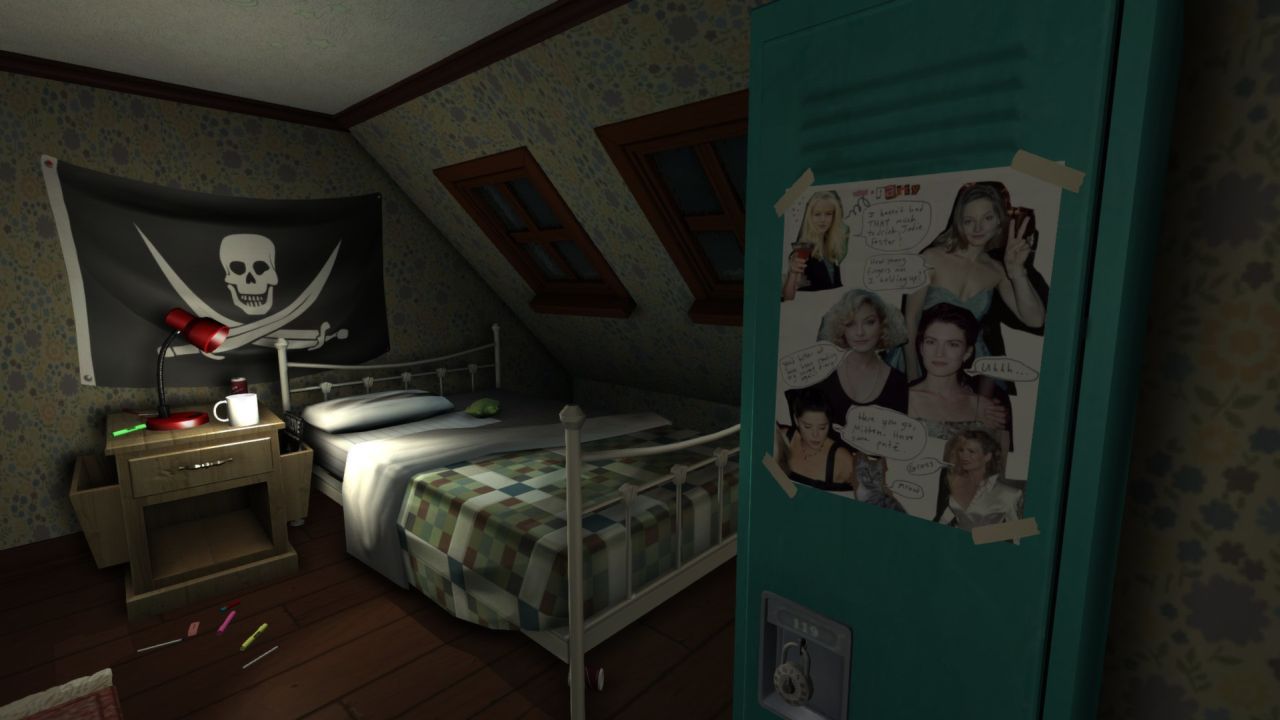 To find out what happened to your sister, you may have to figure out a way into her personal locker. (Credit: Fullbright. Fair use.)

Unlike a point-and-click adventure, where almost every item you encounter has some role to play, here you can interact with countless objects—pens, glasses, knick knacks, etc.—but most of them have no relevance to the plot. You have to sort through the messy home, and the house has a few secrets of its own.

There’s remarkable attention to detail, especially in the riot grrrl aesthetic of your sister’s belongings. In addition to zines and posters, you can even pick up and play cassettes with music featuring bands like Bratmobile and Heavens to Betsy.

Gaming is now a bigger tent than it ever was, and just as writing has room for short stories, gaming has room for experiences like this, where your own interpretation of a story takes precedence over puzzles or action.

My biggest criticism is that the sheer abundance of paper clues made the game a bit less atmospheric, more like an artificial world that an author has littered with stuff I’m supposed to find. Someone needs to teach the Greenbriars about recycling.

The game makes up for flaws like this with a layered story that is moving and well-told. If you’re not looking for a 20 hour diversion or a 200 hour addiction, and if exploring a story on your own terms sounds appealing, then I recommend giving Gone Home a spin. I wouldn’t have bought it at the regular price of $15, but at a discounted $6 price on GOG, it was well worth the money.