Gyakuten Kenji 2 a.k.a. Ace Attorney Investigations 2, is the Japanese-only sequel to Ace Attorney Investigations: Miles Edgeworth. The game’s plot immediately follows the events of the predecessor. Again, you take control of persecutor Miles Edgeworth to investigate and solve many different cases, together with his young assistant Kay Faraday and his subordinate policeman Dick Gumshoe. Previously having smashed an international smuggling ring, they are given no break and are immediately caught up in new cases to investigate. Their efforts slowly uncover a conspiracy that goes all the way up the prosecutorial chain of authority.

An impressive display of fan labour

First of all, this is an English review of a game that was only officially released in Japan. This is only possible, because of an amazing fan translation.

The quality of the translation is just astonishing. Beyond the translation of dialogue, it also overhauls images and 3D textures for the English language and features original voice acting work for new characters. It is faithful to previous official English translations. But the overall style isn’t forcefully imitated either. When it comes to introducing new characters with unique quirks, the transition is seamless.

This translation would be indistinguishable from previous translations for the Ace Attorney series if it wasn’t for the occasional fandom insider reference. After all, this is a translation made by fans for fans.
Seriously, if doubts about the quality of this fan translation are holding you back—please play this game! I promise, you will enjoy it. 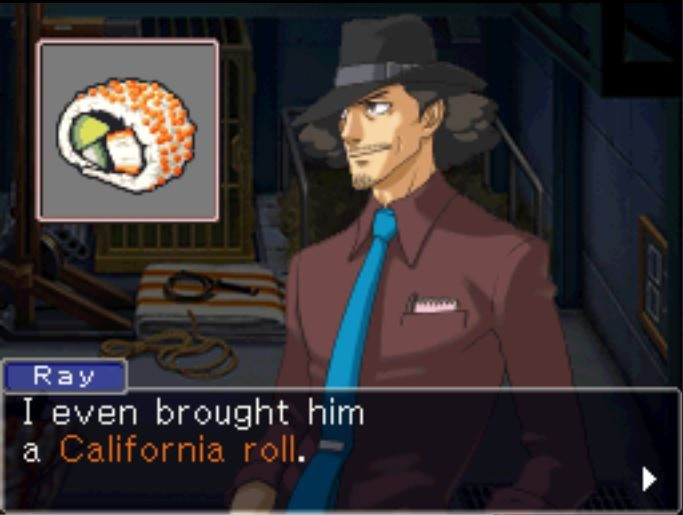 This sequel greatly extends its predecessor’s themes of the incongruence between the law and genuine justice.
In this game, we will see Edgeworth consciously abandoning the von-Karma-way of justice. Previously he sought to prove the defendant guilty in court, no matter what it takes. But now, he is increasingly distrustful of the methods of his mentor. His trust in the justice system is broken in the same way.

Together, with his friends’ help, he takes an adversarial stance against the highest prosecutorial authority in the country, which leads him to temporarily abandon his role as prosecutor and join forces with a defence attorney. And later, the law is directly weaponised against Miles. He was enforcing it against others, up until that point, but never had it turn against himself.
With this, the game manages to spell something out clearly that predecessors ever only managed subtextually: the law is inadequate in delivering justice, and the corrupt institutions enforcing it fail people regularly and perpetuate the harm they are meant to prevent.

However, the most interesting message of these games, that the law’s ability to deliver justice, is merely a belief, remains subtextual. There are hints in this direction. For example, one of Edgeworth’s rival prosecutors is quite reminiscent of the inquisition (their theme is even played on a pipe organ). And for another, the meeting room of the national highest prosecutorial authority looks like a church with stained glass windows. Unfortunately, however, the exploration of this theme seems to take a secondary role to the one mentioned above.

Furthermore, the game explores the struggle of stepping out of the shadow of one’s father. We learn more about Miles’ father, a defence attorney, and his struggle over having ended up a prosecutor. Additionally, the game features another startup prosecutor, who, throughout the game, has to learn to go against his father, to become a proper man of his profession. The scene where this finally happens makes for a very satisfying conclusion.

The overall storytelling structure remains largely intact with some improvements, but this also means that flaws from the predecessor persist.
One thing that is also true for the previous game is that the very linear structure allows for very tight storytelling. Usually, a bit of time passes between each entry in the series, but the story continues immediately. This is one of the major distinguishing factors between these spin-offs and the main entries in the series. One of these styles isn’t better than the other. But for an investigation game, it is arguably a better fit.

Beyond that, the game improves upon its predecessor by spacing otherwise familiar characters from the series out through the game, instead of cramming them all into a singular case. The focus here is a lot more on characters that were previously seen in just one case. So it’s nice to see those familiar faces again and see where they stand now.
Chapter parts, unfortunately, continue to vary in length heavily. This makes it hard to plan for game sessions. It’s frustrating to start playing a part, expecting it to last an hour, and then having to spend double of that time to reach the next save screen.

Gameplay-wise the game largely continues with the things set up in the predecessor. Nothing was removed, and some new things were added.

A new addition is “Logic Chess”, a timed interrogation, where you have to extract information from people by examining what they are saying and finding contradictions. Having a mechanic with time pressure is a first for the series. Initially, this feels alien for this type of game, but over time I found that it accentuated the urgency of some of the situations quite well. On top of that, it makes you think a lot more about what path you want to go through the dialogue tree, while always feeling the pressure of the clock ticking down. It makes for a nice and refreshing challenge.

Another addition is how recreated crime scene investigations with “Little Thief” have been extended to cover multiple periods in time that you can switch to at will. It requires that you build a bigger mental image of the crime scene instead of just looking at everything one by one. This, however, can also lead to confusion. One frustrating aspect of this addition is that the exact same dialogue triggered by the same object at different points in time are duplicated, and thus you can’t skip through dialogue that you have already read. It can be confusing to stumble across already encountered dialogue and be puzzled if the intuition of having seen this before is real or not.

Otherwise, things have stayed the same. This is mostly fine, but I remain disappointed by the “Logic” feature. Combining literally two facts about the case for more insight isn’t that interesting or challenging. Sometimes the connection between the two facts is spurious, and you have to guess more than actually deduce.

Overall this is an excellent game—probably the best in the series up until that point. The predecessor left me somewhat cold, but this game alone makes playing it totally worth it.