In Humanizing the Economy: Co-operatives in the Age of Capital, John Restakis, a veteran of the Canadian co-op movement, argues for increasing the role of co-operatives and economic democracy, without suggesting that they are a panacea.

Restakis’ argument is firmly grounded in a critique of corporate capitalism; the 2007-2008 financial crisis still loomed very large when the book was published. But Restakis is also highly critical of the disastrous and dehumanizing effects of authoritarian systems with centralized, planned economies.

Instead, much of the book comprises case studies of co-operative economics:

Unless you’re steeped in the history of co-operatives, it’s quite likely that you’ll find remarkable examples you’ve never heard of. It’s rare for the narrative in conventional Western media to look at examples like these; when there is reporting about economic matters, it’s mostly about whether this or that elected leader will be “business-friendly” and “convince the markets”.

Restakis challenges this thinking about markets as an implacable, amoral force of nature and instead argues that markets are what we make them. An economy that places shared human concerns at its center (and that de-emphasizes the profit motive and the advancement of the individual) is not only possible—it’s one that hundreds of millions of people already participate in. 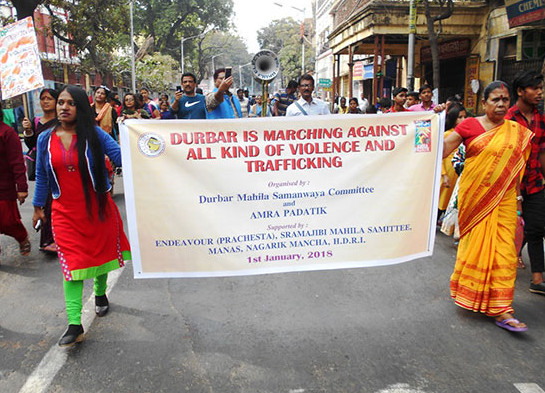 Members of the Durbar collective of sex workers march against violence and trafficking in Kolkata in 2018. Durbar provides services to sex workers, fights for legalization of sex work, and combats human rights violaitons. (Credit: India Blooms. Fair use.)

The ideology of corporate capitalism is just that: an ideology that is taught in schools and universities, in media depictions of success and failure, in its self-advertisements. Corporate capitalism also enjoys massive subsidies, including the planet-wide subsidy of tolerating the destruction of the environment instead of taxing it.

Restakis notes that governments have a choice: to continue to underwrite this ideology without question—or to shift resources towards promoting co-operative economics. This kind of support can range from teaching how to run a business co-operatively, to establishing tax incentives, to setting up resource centers (as was done in Emilia Romagna) that provide administrative support to help co-ops succeed.

It’s not as distant a possibility as it may seem. For example, Jeremy Corbyn’s political platform combines nationalization in some areas of the economy with heavy support for the co-op model and workplace democracy in others.

Restakis frontloads his most radical criticisms of corporate capitalism to the early chapters of his book. Humanizing the Economy is a case for incorporating the co-operative model into economic thinking, without offering a blueprint how to do that, or even suggesting that it should be the dominant model of the economy.

For the most part, the author succeeds in making this argument. Given that the book significantly relies on data (numbers of factories recovered in Argentina; numbers of employees in the co-operative sectors of Italy, Spain or Japan; success of credit unions during the financial crisis, etc.), it is disappointing that there is not a single chart or table in the book.

For a book written in 2010, I would also have appreciated more insights into how the Internet enables new forms of cooperation and sharing. Fortunately, other authors have since filled this void, such as Trebor Scholz and Nathan Schneider with “Ours to Hack and to Own: The Rise of Platform Cooperativism”.

As someone still learning about co-operative practices and the solidarity economy, I found John Restakis’ book a useful wayfinder to a lot of examples that I will likely keep coming back to. If you are looking for similar inspiration, I recommend this book.