Iris and the Giant

A stylish deckbuilder that never overstays its welcome

Iris and the Giant falls into the genre of roguelike deck-building games, in which you collect and use playing cards to engage in combat. You play as Iris, a young girl who is seeking respite from bullying and depression in a fantasy world loosely inspired by Greek mythology.

In isometric dungeons rendered in a minimalist but stylish vector art style, you face wave after wave of enemies in turn-based battle: from skeleton warriors to axe-wielding minotaurs, from deadly cyclopes to thievish boars.

As you survey the field, you must continuously evaluate tactics and strategy. Do you take out the archer in the back, or do you attack the card thief in the first row? Do you use a magic card that will hurt many foes, or do you preserve it until later?

The game offers two main quests: the “Path of the Giant” and the unlockable “Path of the Ferryman”. In addition, the “Challenge of Chronos” lets you play with a time limit. Three difficulty modes are available.

As is typical for roguelike games, death is permanent, with one exception: if you find a rare giant stone, you can retry a stage the next time you die. In addition, in each run, you can acquire both temporary and permanent buffs that will help you in future attempts. 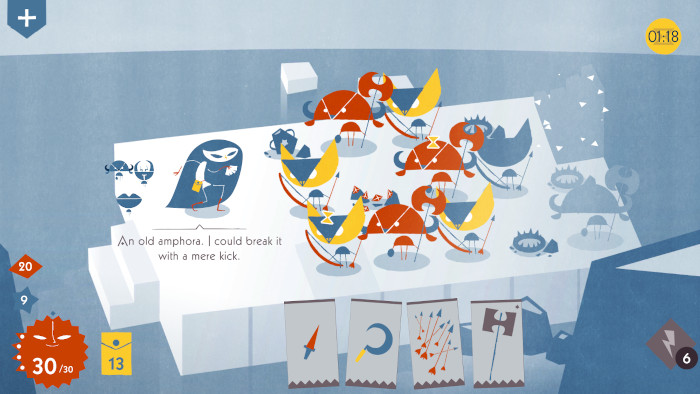 The game’s story is fragmented into memories, which you will find scattered throughout the dungeon. Each memory plays a short animation which reveals an aspect of Iris’ life: her relationship with her parents, her experiences in school, and so on.

This isn’t quite enough to tell a story, and the serious topic matter (depression, anxiety, bullying) is handled in a manner that can feel a bit overwrought and superficial. For me, that was only a mild distraction; your mileage may vary.

I enjoyed the 15 hours or so I spent with the game tremendously. Much of this is thanks to the excellent game design. The mechanics are intuitive and communicated well through text and graphics. There’s plenty of variety throughout the two main quests, and there’s always a small thrill in encountering a new card for the first time.

Once you’ve finished the quests and unlocked everything you want to see, you’ll probably be ready to move on. While there are some extra challenges for completionists, individual runs aren’t sufficiently distinctive to make this a game you’re likely to spend 100 hours with.

If you’re looking for a roguelike that has a lot to offer without getting you addicted, Iris and the Giant is an excellent choice. 4.5 stars.