A short but immersive casual adventure

The world as we know it has ended long ago, and the ruins of San Francisco are crawling with orcs and goblins. Your are a novice necromancer, in pursuit of your brother, who has abandoned you and your family in search of fame and fortune. Perhaps you will find him somewhere in the Transamerica Pyramid, one of the few tall buildings that are still standing.

Knights of San Francisco is a choice-based adventure game for Android and iOS made by a single developer, Filip Hracek, and a single illustrator, Alec Webb. It is mostly text-based, and the gameplay is somewhat reminiscent of Choice of Games titles, but Knights also severs to showcase the game’s own engine, Egamebook.

You move through the game’s world by selecting destinations on a map. As you do so, you encounter allies, enemies, and items that may help you on your quest. During turn-based combat, you control only your own actions (your allies attack independently). You are given a surprisingly large set of choices, from feinting, to casting a spell, to kicking a weapon out of the way. 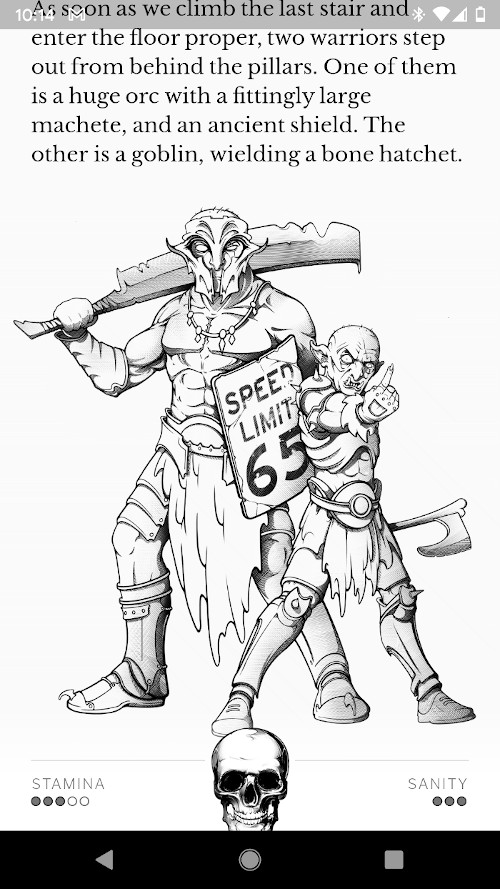 The game is mostly text-based, but the illustrations by Alec Webb help to establish the setting. (Credit: Raindead Games / Alec Webb. Fair use.)

After each choice, a dice roll determines success or failure; if you fail, you can drain your stamina or sanity points to re-roll. The game generates text that describes the result of each combatant’s actions.

There are no hitpoints or levels, and death can come quickly. Still, thanks to your allies, the necromancy skill, restorative items, and the re-roll option, most battles will not present much of a challenge. Just in case, the game lets you rewind bad decisions (I only had to do so once).

The story is told in short paragraphs, much of it through dialog with friendly characters which you can skip if you prefer to focus on combat. The writing is solid, and you do get to make a choices that will shape the story and its ending.

If you’re looking for a game that will give you hours of replay value, this isn’t it—a playthrough takes about 60-90 minutes, and there’s not much that changes on a second run. But it’s immersive, novel, and fun, and only costs $3. Whether or not you pick this one up, Raindead Games is worth keeping an eye on.