Imaginative deckbuilder that's simple to pick up, hard to master

Titles like Slay the Spire (2017), Griftlands (2019) and Inscryption (2021) have defined the genre of roguelike deck-building games where you combat enemies using playing cards. Can small indie studios still bring something new to the crowded genre?

With Meteorfall: Krumit’s Tale, Slothwerks, founded by developer Eric Farraro, is building on the success of its earlier Android/iOS game, Meteorfall: Journeys. Both games feature an art style inspired by Adventure Time and are set in a fantasy world that includes magic, monsters, aliens, and robots.

The intro screen for Krumit’s Tale depicts the outside of Krumit’s cozy house. After you start the game, the aging dungeon-master—who looks like he is part goblin, part elf—quickly invites you in to choose a character and to begin playing a game of cards. 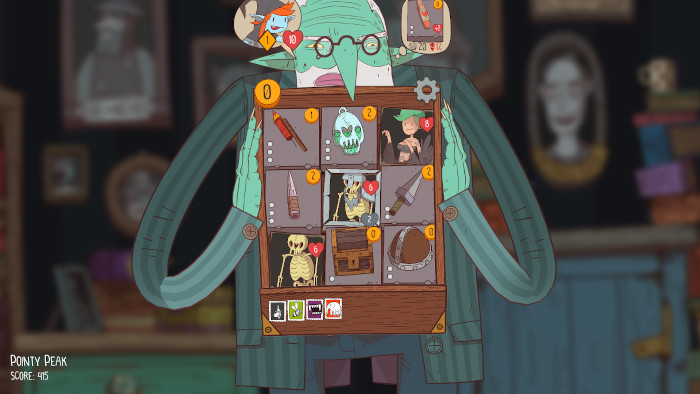 Dungeons are represented by a 3x3 grid of items, abilities, and enemies, with Krumit commenting on your actions in the background. (Credit: Slothwerks. Fair use.)

You find yourself facing a 3x3 grid of cards, which include items, abilities, and enemies. You can discard cards to recover health and to gain coins. You can then spend coins to purchase items and abilities, which are added to your hand of up to four cards.

After cards are removed from the grid, Krumit deals new ones, until there are none left in the deck. Combat is turn-based and driven by simple stats (attack, defense, health). In most cases, you have the first move.

In spite of the title promising a “tale”, there’s little to no story as you advance from dungeon to dungeon randomly. Krumit himself is quite chatty and comments on many of your actions with one-liners; he also introduces bosses when they appear on the board.

As is typical for the roguelike genre, death is permanent. This makes for very tight “runs” that typically last 20-40 minutes. 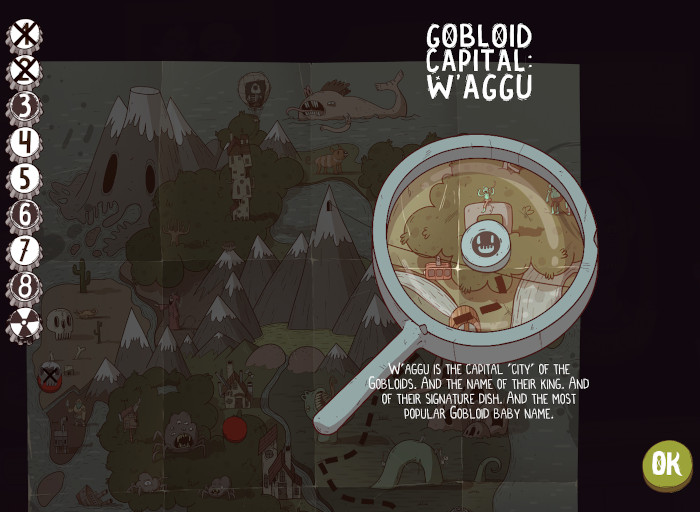 One of the weaknesses of the game is that you don’t get to choose where the journey goes: Krumit navigates the map for you. (Credit: Slothwerks. Fair use.)

The game quickly introduces its core mechanics, while providing concise on-screen explanations for all cards. Each of the five unlockable heroes has access to a different set of abilities and items, forcing completely different play styles.

The wizard can burn enemies from afar, causing them to take damage as they move down the grid. The necromancer turns enemies into tombstone cards, which he can then raise to fight in his stead. The rogue is weak, but gains stealth against enemies with no neighbors on the board.

Enemies are similarly varied, from robots that self-destruct to town guards that prevent you from using melee weapons until you defeat them.

To knock out the most powerful bosses, you need luck on your side, but the game also requires strategy to make the best of the cards you’re dealt. After each victory, the game awards you with gems depending on how well you did. You can use these to purchase higher quality cards for the next dungeon.

I am really enjoying my time with Krumit’s Tale and have added it to my list of evergreens that I’m likely to return to time after time. Overall, I would give the game 4.5 stars, rounded up. Its core strengths are:

The most noticeable weaknesses are:

The combination of tight gameplay and shallow story is typical for mobile games. As Slothwerks makes the transition to large screen games, many players will expect a more fleshed out experience. Still, I would highly recommend Krumit’s Tale if you find the art style appealing and enjoy roguelike games that can, at times, be utterly unfair.

While I would love to see a native Linux version, I played Krumit’s Tale on Linux using Steam/Proton without issues.