What they did in the shadows

19-year-old Gail and Zella Kastner, identical twins born to a Montreal family, were honors students in high school, “popular with the boys and in love with skating and horse-racing” [source]. But one day in 1953, Gail made the fateful decision to seek help for mild depression anxiety at the highly reputable Allan Memorial Institute.

What followed was a journey through hell: electroshock treatments, drugs, and attempts to “de-pattern” her brain—reprogramming her personality in an attempt to cure her.

She emerged in a childlike state: sucking her thumb, talking like a baby, demanding to be fed from a bottle, and urinating on the floor. She also suffered memory loss and couldn’t recognize members of her own family, not even her twin sister, Zella [source]

Gail’s life derailed, and it’s only after long legal battles that she was awarded modest damages in 2004. Many more patients would be subjected to these destructive techniques by the institute’s founding director, Ewen Cameron, a towering figure in international psychiatry at the time. His work on de-patterning and “psychic driving” would become known as the Montreal experiments.

Gail’s story is referenced in a single sentence in Stephen Kinzer’s new book, Poisoner in Chief, a biography of Sidney Gottlieb, the head of the CIA’s notorious MK-Ultra program. As part of the program, the CIA became aware of Cameron’s work, and decided to invest in his research by way of a front group ominously called the “Society for the Investigation of Human Ecology”.

But more than MK-Ultra’s notorious experiments with LSD, which Kinzer describes in detail, the Montreal experiments help us to draw the line between what happened in the 1950s and the “enhanced interrogation techniques” applied at CIA black sites around the world. Sensory deprivation, noise, endlessly repeating recorded messages: these methods have stood the test of time in the psychological torturer’s arsenal.

That’s also the perspective of a new documentary, Eminent Monsters, by Stephen Bennett, which focuses heavily on Cameron’s experiments, on the treatment of the “Hooded Men” in Northern Ireland in 1971, and on torture in the “War on Terror”. (You can watch it in full on Prime Video.) 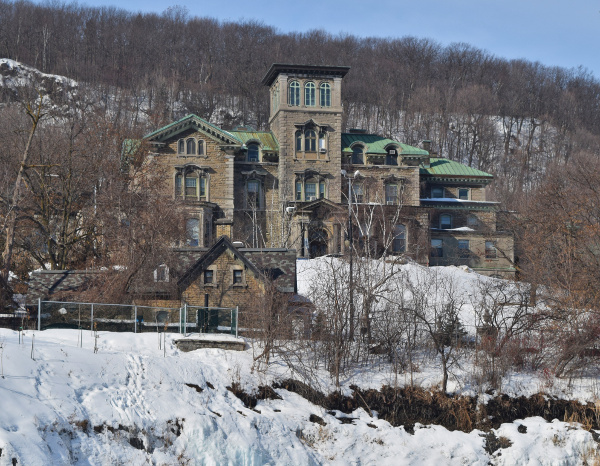 While Ewen Cameron directed its work, many patients were admitted to the Allan Memorial Institute with mild symptoms and left with lifelong psychological damage. (Credit: The Cosmonaut. License: CC-BY-SA.)

In contrast, Kinzer’s book tells the whole story of Gottlieb’s work, or at least the parts which we have a record of. Gottlieb was involved in many of the CIA’s dirtiest plots—from an assassination plan targeting Patrice Lumumba (who was later killed in a Belgian-backed plot) to CIA-run brothels in the United States where patrons of sex workers were drugged and observed. Other highlights of Gottlieb’s career include:

Kinzer paints Gottlieb as a troubled figure, a man with humanist sensibilities, who may have been riddled with guilt later in his life. Not a sadist, but someone who was radicalized by America’s anti-communist fanaticism to do whatever it takes in order to counter exaggerated or imagined threats.

There’s some gallows humor in these tales of a CIA so obsessed with LSD that people had to worry about spiked punch at Christmas parties, of experiments so bizarre that only the later Stargate Project (which sought to mobilize psychic “remote viewing” powers for intelligence) could top them.

Kinzer’s book is well-researched and includes some new and little-known material. As a biography, it is ultimately focused on the man Gottlieb, an approach which sometimes gets in the way of illuminating the context and consequences of his work. Bennett’s Eminent Monsters focuses more narrowly on the topic of psychological torture. While it is unlikely to dissuade those who believe that such methods are necessary to fight terror, it does a great job explaining their history and centering the victims.

Poisoner in Chief and Eminent Monsters are important contributions to understanding the intellectual foundations for modern torture programs. They also remind us of the importance of effective oversight of any intelligence agency, and what happens when “patriotic” fervor meets immense power without accountability.