Review: 1001 Video Games You Must Play Before You Die

1001 Video Games You Must Play Before You Die
www.wikidata.org/wiki/Q4546082
More reviews and information

Since the ascent of “casual” gaming, the explosion of online game publishing, and the rise of esports, video games have become mass culture for people of all ages. It’s only natural then to come across books like 1001 Video Games You Must Play Before You Die. The title a suggests grand curatorial ambition which the book never quite realizes.

It covers games across all devices and is organized chronologically, starting in 1971 (The Oregon Trail) and ending in 2013 (Bioshock Infinite). The book inexplicably focuses the bulk of its attention on titles from the 2000s (pages 416 to 921). So, prepare to read lots about the various Grand Theft Auto titles and Guitar Hero type games. On the other hand, Sierra Online’s entire catalog of adventure games is reduced to a single title (The Beast Within: A Gabriel Knight Mystery). 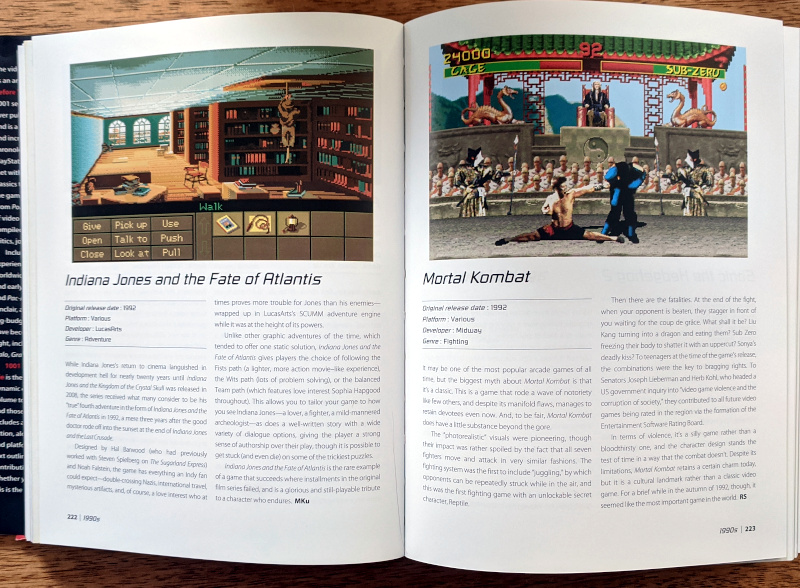 Most games in the book are as lavishly illustrated as the ones visible here. Some reviews, however, are entirely without screenshots. (Credit: Universe Publishing / Quintessence Editions Ltd. Fair use.)

The reviews of each title include plenty of criticism (sometimes so much that one has to wonder why the game made the cut at all), but no scores. With a large number of contributing writers, the quality of the writing is inconsistent. Some authors do an excellent job capturing a game’s ambience, story and gameplay; others barely describe the game at all, dwelling instead on development history and other minutiae.

My biggest frustration was that some games were included without any screenshots whatsoever—and we’re not talking about text adventures here, but titles like Elite or Nintendogs. This is the exception, but it’s still a cardinal sin for this kind of book, and the reason I can only give it three stars.

All in all, I don’t regret keeping this hefty compendium on my shelf, but if you’re looking for video game curation done well (with a lot more love for older games), I would recommend checking out the many titles by Bitmap Books instead.