A fascinating premise that never works as a game

Anchuria is the original banana republic. Literally: both the country and the term were invented by O. Henry for Cabbages and Kings, a 1904 collection of interlinked short stories inspired by the author’s stay in Honduras. It is also the setting of Sunset, a 2015 narrative adventure game developed by Tale of Tales—and the game that caused the small studio to give up on making games altogether.

In Sunset, it’s 1972, and you are Angela Burnes, a young, idealistic African-American engineering graduate working as a housekeeper in Anchuria. Your client is Gabriel Ortega, a wealthy man who has recently moved into a new apartment in Anchuria’s capital, San Bavón.

Day in and day out, you perform mundane tasks in Ortega’s large and luxurious penthouse apartment. Over time, you learn about Ortega’s connection to President Miraflores (another name from the 1904 book). The game also reveals more about why Angela and her brother are in Anchuria in the first place.

The daily tasks expand from household chores to the examination of documents and photographs. While you don’t ever interact with Ortega in person, you can exchange notes with him. How you perform your household tasks (efficiently, with a touch of intimacy, or not at all) also affects your relationship with Ortega.

Every day, you can look outside the apartment’s large windows, where the larger political story of Anchuria unfolds. An LED news banner on a building speaks of terrorist attacks. You hear gunfire and see smoke. And some of the fighting is taking place dangerously close to the apartment. 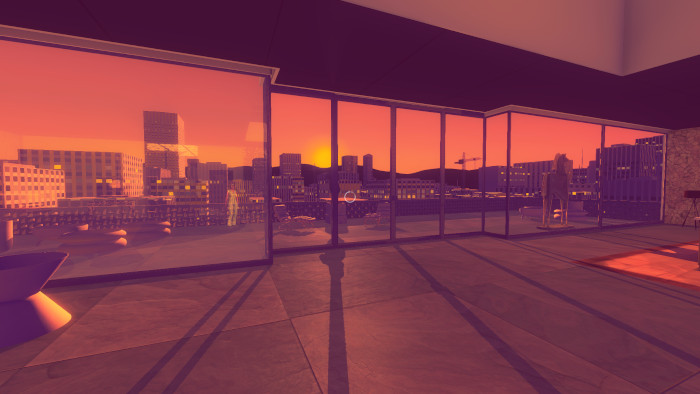 Through the apartment’s windows, you can see the cityscape of Anchuria’s capital. Here, a larger political story unfolds throughout the game. (Credit: Tale of Tales. Fair use.)

It’s a fascinating premise that’s a welcome departure from forest elves and space stations. During a few moments in the game, I really was drawn in by the intrigue and by the drama in the streets. Unfortunately, the game’s only mechanic—perform tasks in a large apartment every day—becomes as tedious as it sounds very quickly.

It doesn’t help that some of the tasks are ambiguous (“collect papers”), so you have to do the 3D equivalent of pixel hunting throughout the apartment to complete them (fortunately, you can skip them as well, which I had to do a few times).

There are technical issues, too. The graphics are just serviceable by 2015 standards, yet the game’s engine performs poorly. The gamepad controls occasionally lose their mind and have to be reset. And in the Linux version at least, the game skipped right over the ending for me—I had to watch it on YouTube.

It’s a shame—there’s a lot of worldbuilding here, decent voice acting, and some good writing. There are lots of little touches that reveal the labor of love behind the game, such as many vinyl records you can pick up and play, including “Anchurian” music. One can hope that the game will at least inspire other indie developers.

Sunset could have worked well as a smaller game. By spreading its repetitive gameplay over 4-6 hours, it will overstay the welcome of all but the most patient players. To add insult to injury, in the late game, Ortega packs up a bunch of his stuff into huge crates, turning his apartment into an obstacle course that’s even more annoying to navigate.

After disappointing sales, the Belgian developers wrote, in a blog post overflowing with frustration: “We really did our best with Sunset, our very best. And we failed.” I picked Sunset up in the virtual bargain bin and don’t regret it—but I cannot recommend it unless you’re intrigued by the premise and prepared to deal with its frustrations. If so, buy it on a sale.