An addictive twist on the deckbuilding genre with few flaws

What if you took some of the best ideas from the roguelike deck-building genre, but instead of being dealt cards, you rolled dice on each turn? That’s the premise of a ridiculous, addictive, and sometimes frustrating game called Dicey Dungeons.

Developer Terry Cavanagh has published indie games since at least 2008, but his breakthrough titles were the puzzle platformer VVVVVV (2010) and the brilliant twitch game Super Hexagon (2012).

When I first looked at Dicey Dungeons, I was not especially enamored. Anthropomorphized dice, really? The moment you start actually playing it, the game’s self-aware sense of humor makes it all work.

You play as the contestant in a gameshow whose host, Lady Luck, promises to fulfill your innermost desires if you win. The catch? You’re transformed into a dice and are doomed to compete in Lady Lucks’s dungeons forever, with the game clearly rigged against you.

Revenge of the bloodsucking vacuum cleaners 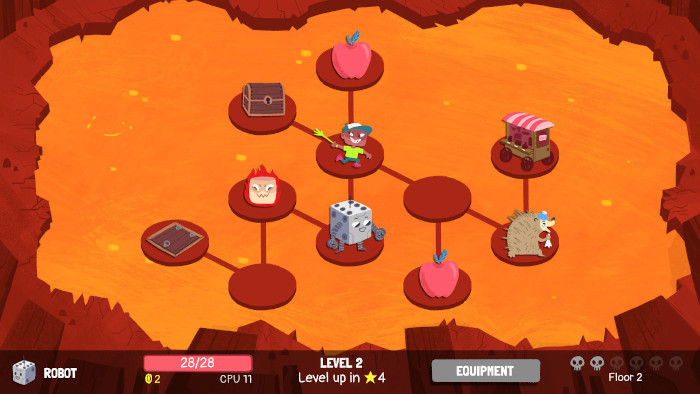 The maps are the least interesting part of the game, but they do show you all the enemies you can fight in a given level. In this case, you can go up against a marshmallow, a coin-stealing kid, and a sickly hedgehog. (Credit: Terry Cavanagh. Fair use.)

The enemies you encounter are not the standard fantasy fare. Instead, your next opponent could be a bloodsucking vacuum cleaner, a snowball-throwing yeti, a poisonous ice cream cone, or a guy whose entire head is a home stereo system.

Battles are turn-based. On each turn, you roll a number of dice, which you then drag and drop to a compatible item in your inventory. You may not have one! For example, all your items might require even numbers, and you might roll a bunch of threes.

It’s a simple enough concept, but with a large variety of enemies and items, it adds up to a rich gameplay experience. By itself, that could make for a 5-10 hour game. What makes Dicey Dungeons a 30-60 hour game is its willingness to throw its own rules by the wayside.

As you play the game, you unlock new characters with their own sets of items, and with completely different play styles. For example:

Moreover, each character advances through six episodes that play with rules in interesting ways. The most interesting of these are the “parallel universe” episodes (in which items and status effects work completely differently) and the bonus episodes (in which you gradually accumulate randomized rules like “after 4 turns, all enemies transform into bears”).

It all culminates in a final confrontation which, again, does something completely new and interesting with the game mechanics. I won’t spoil it for you; suffice it to say that there’s a lot to keep the player engaged. And when you’re done with that, there are some (fairly easy) Halloween bonus episodes as well.

As with Super Hexagon, Cavanagh again collaborated with Chipzel on the music. Unlike the high octane chiptune sound of Super Hexagon, Dicey Dungeons’ soundtrack blends in jazzy flavors, which give the game a unique feel. 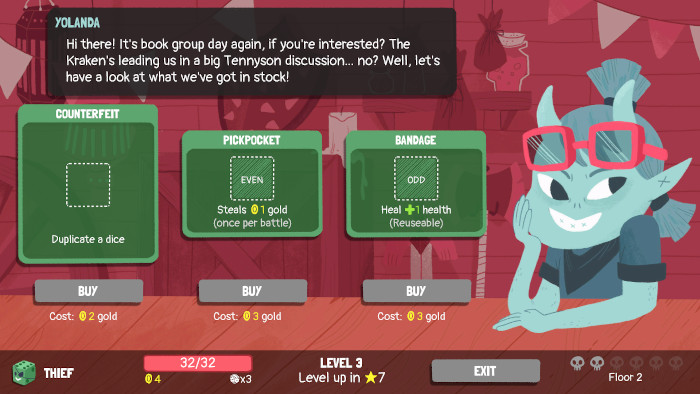 The game’s wit and humor come through in many places, such as when visiting shops. Sometimes the shopkeepers will even remark on specific enemies in the level you’re in. (Credit: Terry Cavanagh. Fair use.)

The game is not perfect. My criticisms of it can be summed up in three categories:

Those criticisms shouldn’t distract from the fact that Dicey Dungeons, overall, is a hell of a lot of fun to play. There’s a lot of love in the details, from the silly unlockable enemy biographies, to the clever dialogue during encounters or shopkeeper visits.

I would give the game 4.5 stars, rounded up because of the sheer amount of gameplay variety and content. If you enjoy the deckbuilding formula, and are looking for something similar that may keep you entertained for a few weekends, go and roll those dice—you might get lucky!