In the United States, the term “liberal” has become associated with the soup of center-left to center-right ideas promoted by the US Democratic Party, and it would be overly generous to ascribe to those ideas any coherent ideological foundation. Historically, liberalism (or “classical liberalism”) has a more specific meaning and is linked to the writings of figures like John Locke, Adam Smith, John Stuart Mill and Alexis de Tocqueville.

The importance of understanding what these individuals truly said and did has been elevated by what The Baffler called the “Classical Liberal Pivot”, the attempt by reactionaries ranging from outgoing GOP Speaker of the House Paul Ryan to InfoWars alumnus Paul Joseph Watson to frame their ideas through reference to a past most people only have a patchwork knowledge of.

Liberalism: A Counter-History by Domenico Losurdo (d. 2018) was published in 2011 and limits itself largely to the analysis of liberal thought up to the 20th century, with occasional reference to 20th century writers like Friedrich Hayek and Ludwig von Mises. As a counter-history, it intends to focus on the less well-known aspects of liberal ideology.

In particular, the book is concerned with how liberal ideology frequently defined civilization and humanity precisely in such a way as to support the goals of regional power elites at the time: to maintain and extend the system of slavery in the American South, to displace or exterminate Native Americans, to commit atrocities in French Algeria, Ireland or the British colonies, to coerce the poor into labor or military service, and so on.

To support this thesis, Losurdo primarily cites the writings of liberals themselves. Let’s work backwards: von Mises, a hero to free market libertarians, wrote in Liberalism, published in 1927:

It cannot be denied that Fascism and similar movements aimed at the establishment of dictatorships are full of the best intentions and that their intervention has for the moment saved European civilization. The merit that Fascism has thereby won for itself will live on eternally in history.

The Mises Institute complains bitterly that this quote is taken out of its context (in context, von Mises views Fascism as an “emergency makeshift”), but it’s hard to say how any celebration of Fascism’s eternally won merit can be rescued by context. This quote may be surprising, but it is mild stuff compared to the ideas of de Tocqueville, who celebrated the Opium War (a war waged by Britain to force China to buy opium!) with these words (emphasis mine):

I can only rejoice in the thought of the invasion of the Celestial Empire by a European army. So at last the mobility of Europe has come to grips with Chinese immobility! It is a great event, especially if one thinks that it is only the continuation, the last in a multitude of events of the same nature all of which are pushing the European race out of its home and are successively submitting all the other races to its empire or its influence. Something more vast, more extraordinary than the establishment of the Roman Empire is growing out of our times, without anyone noticing it; it is the enslavement of four parts of the world by the fifth. Therefore, let us not slander our century and ourselves too much; the men are small, but the events are great. 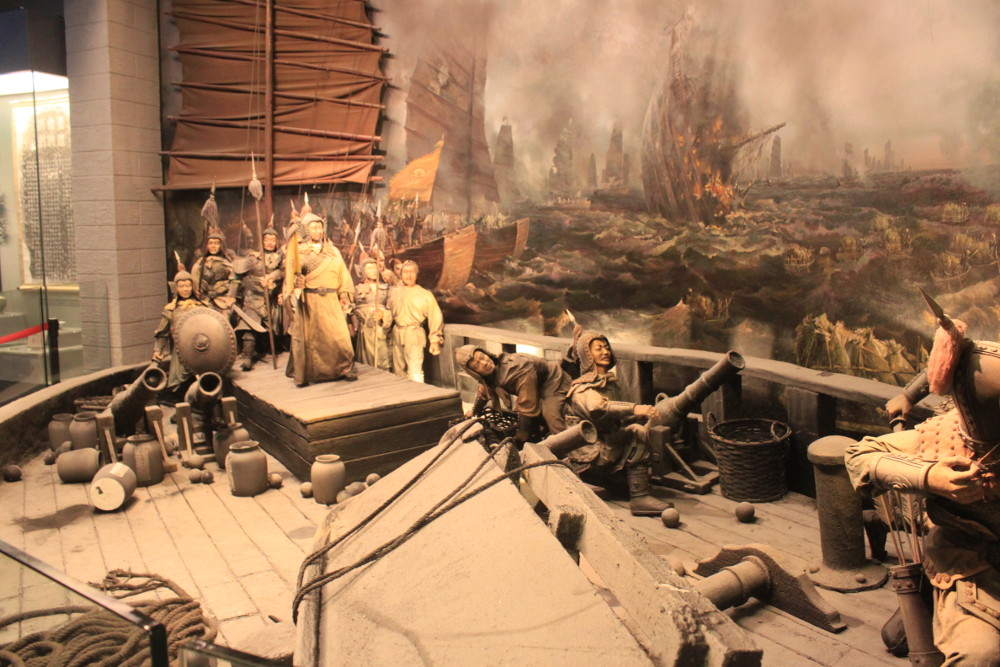 First Opium War display in the Shenzhen Museum. Alexis de Tocqueville celebrated the war as part of “the enslavement of four parts of the world by the fifth”. (Credit: Huangdan2060. Public domain.)

How can such ideas be reconciled with any concept of “liberty”? Losurdo unpacks this contradiction masterfully. Liberalism has consistently resolved the contradiction by defining the world into a “sacred” and a “profane” space. The “sacred” space is the one where liberty has to to be defended against despots; the “profane” space is that occupied by people who are inferior, less than human, “wild beasts”, rightly conquered, justly enslaved.

This profane space was reserved for women, the native populations of countries subjected to settler-colonialism, the Africans abducted in murderous journeys to serve as slaves in the colonies, people convicted of crimes (however immoral the basis of the conviction), the poor, the disabled, and so on, and so forth.

And it is with this distinction in mind we can understand that John Locke, “the father of liberalism”,

regarded slavery in the colonies as self-evident and indisputable, and personally contributed to the legal formalization of the institution in Carolina. He took a hand in drafting the constitutional provision according to which ‘every man of Carolina shall have absolute power and authority over his Negro slaves, of what opinion or religion soever.’ Locke was ‘the last major philoso­pher to seek a justification for absolute and perpetual slavery’. However, this did not prevent him from inveighing against the political ‘slavery’ that absolute monarchy sought to impose. [p. 3]

Perhaps nowhere was the contrast between rhetoric and reality more stark than in the American Revolution—a revolution in significant part undertaken to continue America’s genocidal expansion westward (which the British sought to limit), while perpetuating a horrific regime of hereditary chattel slavery. It is for these reasons that Losurdo refers to the new American nation as a “master-race democracy” and calls racial chattel slavery and liberalism a “twin birth”.

Losurdo quotes Theodore Roosevelt, who called “the inability of the motherland country to understand that the freemen who went forth to conquer a continent should be encour­aged in that work” the “chief factor in producing the Revolution”; Roosevelt complained that Britain wanted to “[preserve] the mighty and beautiful valley of the Ohio as a hunting-ground for savages”. [p. 303]

Yet, it was the rhetoric of the American Revolution that inspired the French Revolution, which in turn inspired the Haitian Revolution by self-liberated slaves. Fearful that such an authentic struggle for liberty might lead to slave rebellions in the United States, Thomas Jefferson assured a French diplomat that “nothing would be easier than to furnish your army and fleet with everything, and to reduce Toussaint to starvation”. When the revolution ultimately succeeded, Jefferson imposed a crippling embargo that would last nearly 60 years.

Losurdo contrasts liberalism with the “radicalism” of the Haitian and French revolutions. It was precisely people in the liberal tradition who often argued and fought against broad liberation, whether it’s the abolition of slavery or the expansion of suffrage, limits on working hours and child labor, the recognition of trade unions, and so on. As new rights were won, the line between “sacred” and “profane” spaces shifted.

The author acknowledges that liberalism is, above all, an ideology adaptable to its time and place. Few “neoliberals” would argue for the re-introduction of child labor in wealthy countries, but many would describe horrific labor conditions in the rest of the world as a necessary evil (or even positive good) that’s part of economic development. Here we see a similar division of the world into “sacred” and “profane” spaces, but under greatly altered parameters.

Like many other academic writers, Losurdo is inclined to repetition, though to his credit, he often reinforces earlier arguments with new material. References to writers, historical figures and events are introduced rapidly, and I found myself looking them up on Wikipedia more than once to get my bearings.

A more serious criticism of the book is its uncritical use of derogatory terms like “redskins” throughout, and its relative silence on the role of women (and the patriarchal aspects of liberal ideology). Moreover, Losurdo makes no serious effort to draw the connections and parallels between “classical liberalism” and modern liberal or libertarian thought.

Nonetheless, if we want to recognize the patterns of history in the present day, we have to first know what these patterns are. Liberalism: A Counter-History is an important contribution to recognizing the rhetoric of liberation that may overshadow, or even enable, the oppression of those not included in its “sacred space”.