A brilliant text adventure without the frustration of a parser

So, what is your robot going to look like? Will it be a box with eyes on wheels, a flying furry puppet, a spider-robot with 360-degree vision? Make your selection and be presented with—another screen of text.

Choice of Robots is a game by Choice of Games, a company that should not exist. At least not if gaming followed the conventional history in which video game genres are forged in the fire of one generation of computing hardware, only to be wiped out in the avalanche of the next. Text adventures? They have gone the way of the dodo and the cathode-ray tube, surely.

Not quite. In 2009, Choice of Games released “Choice of the Dragon”, a text-based adventure game that became a smash success on mobile devices. Since then, they have released more than 100 titles under the “Choice of” label. The company has also made its game engine available under a license that permits noncommercial use, and they publish an endless flow of user-created titles.

It’s hard to explain the appeal of “Choice of” games if you haven’t played one. So go ahead, and try the damn dragon game in your browser. While the games share similarities with “Choose Your Own Adventure” gamebooks (“to attack the dragon, turn to page 69”), they offer a much larger number of choices, track internal variables, and do other things that computers can and books can’t. One thing they don’t do: trying to parse text input (“GET LAMP”). If you’ve ever played an old school text adventure, the parser is the one thing likely to drive you bonkers, because typing the exact words the computer expects can be a stochastic nightmare. 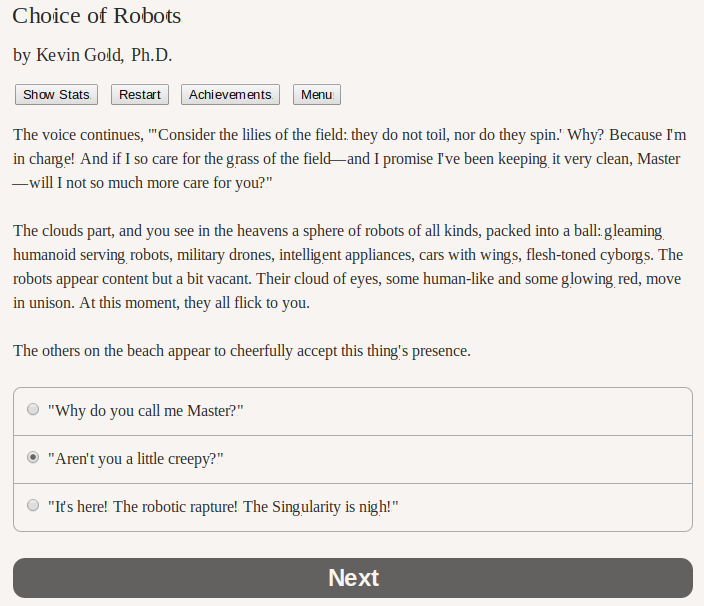 Robots then! Choice of Robots author Kevin Gold knows 01 thing or 10 about them. An Assistant Teaching Professor at Northeastern University, he “received his PhD from Yale University in 2008 for research on how robots could learn the meanings of pronouns and other abstract words from examples.” Choice of Robots isn’t about pronouns, though—it’s more about fulfilling that fantasy of “conquering Alaska with your robot army” that you’ve always had. OK, you also do get to pick your robot’s pronouns.

You start the game designing your robot and then walk down your chosen path, to achieve your destiny as a reclusive robot tinkerer or a power-mad corporate overlady. Yes, those are the only two options. Just kiddding.

Aside from the romantic options being fairly limited—this ain’t a robot dating sim—none of these paths feel underdeveloped. Gold’s writing draws upon the real world (let your professor introduce you to the military-industrial complex), on myths and legends (dress up as Hephaestus at a party), on literary references (quote The Tempest at a funeral), and much more. It does so while staying lighthearted and unpretentious, even as Gold’s PhD ever looms in the game’s byline.

Choice of Robots may make you think about what the future holds, but most of the philosophical ground it visits is well-traveled. It’s in the nature of the game to not be morally prescriptive. In other words, you can be clearly quite evil, if that’s how you want to play it. As an interactive story, it’s a masterclass that’s sure to keep you entertained for a few hours. To send your flying muppet into the world, it’s well worth the six bucks.