Review: Tell Me Why

Tell Me Why
www.tellmewhygame.com
More reviews and information

When they are 11 years old, tragedy strikes the lives of twins Tyler and Alyson Ronan. Their mother Mary-Ann threatens Tyler with a shotgun after Alyson cut his hair short. Tyler stabs their mother with a pair of scissors, and she falls into the lake near their house and drowns. That, at least, is what the twins tell the police.

Tyler is admitted to a residential treatment facility, and doesn’t see his sister for the next 10 years. During that time, Tyler, who identified as a boy from a young age, completes his transition as a trans man. At age 21, Tyler and Alyson finally reunite to sell their mother’s old house—and to unravel their family story.

In three episodes, Tell Me Why by Dontnod Entertainment (Life is Strange) puts the player in control of both Alyson and Tyler as they explore their childhood home, question old family friends, and relive the past. Was their mother unable to accept Tyler as a trans child, or did she suffer a mental breakdown for other reasons?

The game is set in a fictional small town in Alaska, giving it a backdrop of snowy mountains, forests, and the lake near the family home. Indoor environments, too, are rendered in rich detail, from the Ronan residence to the local police station and the town’s grocery store. 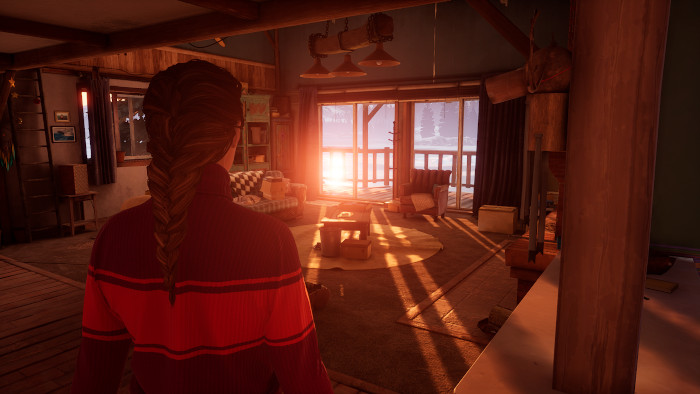 Even indoor environments like the Ronan residence are rendered in exquisite detail, with beautiful lighting and gorgeous views of the outside scenery. (Credit: Dontnod Entertainment. Fair use.)

With choices on top

The gameplay follows the pattern established in the Life is Strange games: you walk around, talk to people, look at and for objects, and sometimes complete (typically very easy) mini-games or puzzles. Occasionally, you make choices that will influence your relationship with other characters for the rest of the game.

There’s a supernatural element to story and gameplay, as well. Without spoiling anything, suffice it to say that Tyler and Alyson share a deep bond that may help them in their quest to learn the truth.

I almost immediately fell in love with the game’s characters and was captivated by the story and graphics. On the other hand, I found the choice mechanic and its relationship with the story underdeveloped.

After important choices, the game indicates whether the bond between Tyler and Alyson has increased or not. But it’s rarely clear how this relates to the progression of the story, or why the player would want to weaken the bond between the two, who clearly love each other. The choices felt layered on top of the story, not like an integral part of the game.

Tell Me Why is not a masterpiece, but it is a beautiful narrative adventure, and I enjoyed the time I spent with it. The developers deserve kudos for a good faith (and, it seemed to me, largely successful) effort at representation of trans and queer characters and of indigenous (Tlingit) culture.

I played the game in Proton on Linux without issues (aside from a tiny bit of stuttering during cut scenes, which may be due the limitations of my hardware). It takes about 5-10 hours to complete, more if you want to explore all sides of the story and find all collectibles hidden in the game’s different environments.

The first chapter is free and gives you a good feel for the game. I paid the full price of $20; you may be able to get it at a steep discount if you wait a few months (in June 2021, the full game was given away for free to celebrate Pride Month).