A mechanical romance story in a dreary setting

Cyberpunk stories often take place on Earth in a dystopian future characterized by a) darkness, rain and neon lights, b) corporations running everything. So, really, mostly a darker, rainier version of the present.

Synergia, a visual novel by indie developer Radi Art, takes place on a desert planet colonized by humans that is home to multiple political factions, including a dominant superpower, the Empire.

In other respects, it follows the cyberpunk template, featuring cityscapes drenched in neon lights; cyborgs, androids, and evil corporations. It also takes itself quite seriously.

This is a mostly kinetic visual novel, meaning that there are only a few choices (three in total) you get to make to influence the course of the 4-5 hour long story.

The story revolves around Escila, or Cila for short, a cop demoted under circumstances that will be revealed later in the story. When looking to replace her household android, she gets more than she bargained for: an outgoing, cheerful and remarkably human-like android named Mara. Cila soon becomes entangled in a web of conspiracy and romance. 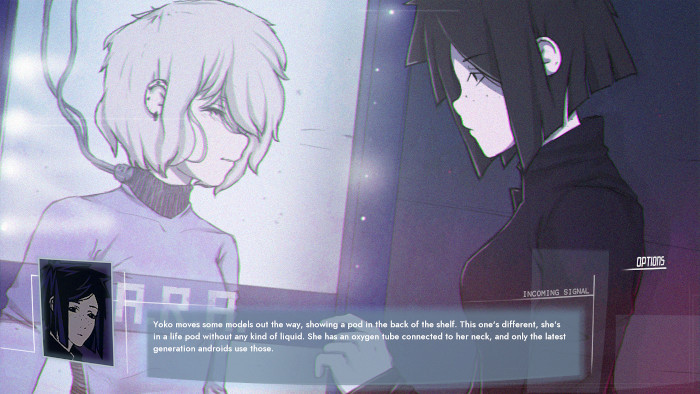 Some of the full-screen art is quite well-done. Here, Cila encounters the android Mara for the first time. (Credit: Radi Art. Fair use.)

Synergia is at its heart about the relationship between Cila and Mara. Unfortunately, as a romance story, Synergia failed to click for me. It reads as a relationship of necessity and convenience—two people drawn together only out of alienation towards the rest of the world, and out of sheer loneliness.

The larger narrative of a conspiracy involving androids, rebels, and corporations is convoluted and unsatisfying. Dialogue doesn’t read like the interaction between different people, but like a single writer cramming exposition into speech bubbles. It doesn’t help that the UI doesn’t always make it obvious who’s talking.

The writing suffers from a few typos and grammar errors. The character art and backgrounds are original and maintain a coherent style. As is typical for low budget visual novels, a few backgrounds are overused. The game’s strongest point is its soundtrack, which never dominates but creates suitable ambience.

I can’t recommend Synergia, but your mileage may vary. If you love the cyberpunk aesthetic and enjoy romance stories that are on the more mechanical side, you may get something out of it.