Daedalic Entertainment made its name with games like Anna’s Quest and the Deponia series, which are helping to keep the genre of 2D point and click adventures alive. Since then, other developers (e.g., Dontnod with the Life is Strange franchise) have shown that it is possible to translate the exploratory appeal and rich narratives of the genre into beautiful 3D worlds.

State of Mind (2018) is one of Daedalic’s entrants into the 3D adventure genre. Set in the year 2048, it’s primarily told from the perspective of two individuals—Richard Nolan and Adam Newman—who grapple with the trauma of a recent accident, and who find that their lives are deeply connected.

The story that unfolds explores transhumanist themes like strong AI and mind uploading, but it remains grounded in a narrative about Richard Nolan’s relationship with Adam, with his own family, and with a lover. 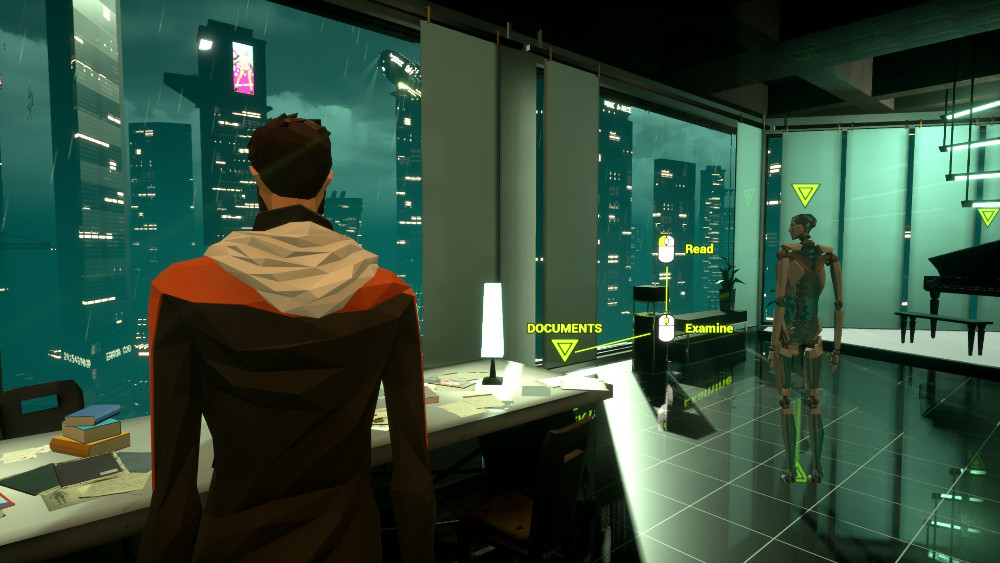 In many parts of the game, the player explores their surroundings (e.g., Richard’s and Adam’s respective futuristic apartments; the gritty Berlin neighborhood where Richard lives, etc.), with limited choices and trivial puzzles. Occasionally, the game throws in a trickier puzzle or a mini-game.

In one of those mini-games, for example, you must navigate a drone through a building’s maintenance shafts in order to listen in on a conversation that happens in another room, without being detected by other drones. If you fail, you get to retry until you succeed.

While State of Mind offers some choices in dialogs, they are fairly inconsequential until the final stage of the game. Then, the player is given a choice between different endings, but even the impact of those choices on the final scenes of the game is a bit underwhelming.

What makes the game work, in part, is that it’s gorgeous. The low poly design of the game’s characters takes some getting used to, but the world they inhabit is rich in detail and imagination.

In one memorable scene, Adam Newman meets his wife on the location of an Augmented Reality art installation, where the game lets you draw with light and sound in the world around you. This scene is just there, and it’s up to the player whether they choose to explore it for its own sake or not.

The story of State of Mind is engaging but derivative, and the execution quality of the game as a whole is mixed (e.g., limited choices, mini-games that can be a bit tedious). Parts of its world are a joy to explore, and the game offers about 10-20 hours worth of generally rewarding play. The native Linux version worked beautifully for me.

I appreciated the game’s willingness to tackle adult themes, the lack of moral finger-wagging, and the deep flaws of its main characters. I found the voice acting not as stellar as, say, Life is Strange, but Doug Cockle (who voices Geralt von Rivia in the Witcher games) pulls you in as Richard Nolan, even if you end up hating him.

While the game is only 2 years old, you’ll now find it on sale regularly for 5 USD or less. At that price, you won’t have any regrets about paying a visit to its morally ambiguous world and the flawed beings that inhabit it.