There’s a good chance that you own multiple devices that give you access to an almost limitless library of games. But there was a time when video game arcades were the place to go to exchange coin after coin for minutes or hours of entertainment—alone or in the company of your friends.

That’s the past that 198x evokes, promising “a coming-of-age story told through multiple games and genres”. Our protagonist, “Kid”, is an alienated suburban teen who discovers a local video game arcade as a means of escape.

The story is minimalist and mostly told through large, beautiful pixel art scenes. Kid is also the game’s narrator. Their melodramatic monologue is at odds with Kid’s privileged and not particularly eventful adolescence. The story ends on a flat note, promising a sequel which may or may not come.

At the core of 198x are five video game vignettes: a beat ‘em up, a space shooter, a racing game, a hack-and-slash platformer, and a dungeon crawler. 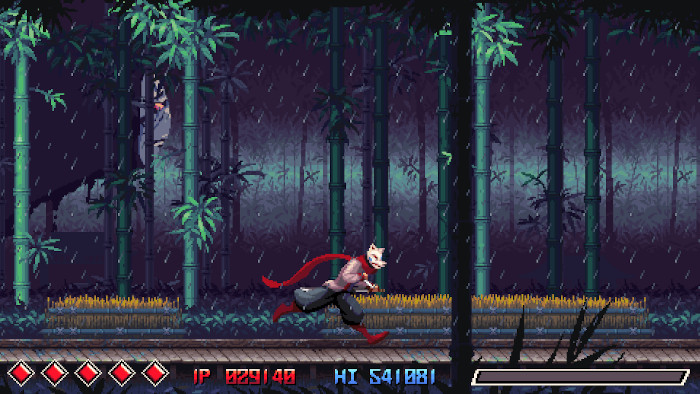 Shadowplay is the most well-rounded of the minigames, with wonderful art and a genuinely creepy boss that chases you in the final stage. (Credit: Hi-Bit Studios. Fair use.)

These are not fully fleshed out games, and they fade out after a few stages. They do successfully evoke the 16-bit gaming era, with Out of the Void (the space shooter) and Shadowplay (the platformer) feeling the most developed.

Most players will be done with 198x after 1-2 hours. Depending on your tolerance for teenage angst, you may find the storytelling portion more annoying than atmospheric; either way, the pixel art is undeniably gorgeous throughout the game.

I would give the game overall 3.5 stars, rounded down because of the underwhelming story. If you like retro games and pixel art, I would recommend checking it out at a discounted price or in a bundle.