Review: The Beast Within: A Gabriel Knight Mystery

The Beast Within: A Gabriel Knight Mystery
www.wikidata.org/wiki/Q2525826
More reviews and information

An FMV classic that never quite reaches its lofty aspirations

When CD-ROM drives became widespread in the 1990s, video game developers found themselves confronted with an abundance of storage space. An HD 3.5-inch floppy disk could hold 1.44 MB; a CD-ROM could hold a staggering 650 MB. Thus began the age of multimedia encyclopedias like Grolier and Encarta, gigantic shareware collections like the Walnut Creek CD-ROMs, and full-motion video games (FMVs).

Sierra, then one of the leading names in gaming, was never the kind of company to miss a trend. The first title in the Gabriel Knight series, Sins of the Fathers (reviews), had already demonstrated game designer Jane Jensen’s ambition to tell serious, movie-like stories in video game form. The sequel, The Beast Within, shipped in 1995 on a whopping 6 CD-ROMs, owing to several hours of digitized video material.

Our protagonist has left St. George’s Books in New Orleans under the care of his assistant Grace Nakimura; he now lives in the old German castle that’s part of his family inheritance. The other part—the one he is more reluctant to accept—is his responsibility to hunt and destroy supernatural evil, for Gabriel Knight is a Schattenjäger, a shadow hunter.

Of wolves and men

His latest assignment is to hunt a werewolf. That’s not a spoiler: in the opening of the game, the local townspeople seek Gabriel’s aid to investigate the brutal killing of a girl which they suspect to be, er, werework. And there are other victims. The official story is that wolves who escaped from the zoo in nearby Munich are to blame. Gabriel must follow the paw prints to discover the truth: are the murders the work of man, beast, or man-beast?

Meanwhile, Grace Nakimura, who played an important role in Gabriel’s earlier voodoo adventure, has no intention of simply minding the store back in New Orleans. After hearing that Gabriel is pursuing a new case, she books the next flight to Germany, drives to the castle, only to find—no Gabriel.

Instead, there’s Gerde, the caretaker, who welcomes Grace but doesn’t quite know what to do with her. In what seems rather a change of character from the first game, Grace bullies Gerde until she is given free rein to conduct werewolf-related research on Gabriel’s behalf.

The story continues over six chapters in which you play as both Gabriel and Grace. Soon, Gabriel discovers a secretive hunting club that seems to be more than meets the eye, and Grace traces a history of werewolves that dates back to the days of Ludwig II of Bavaria and Richard Wagner. 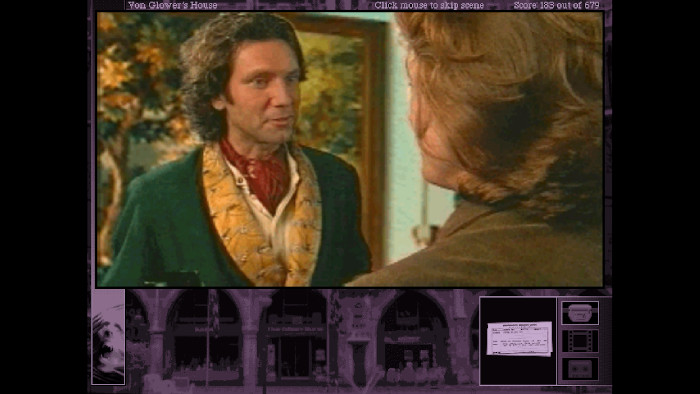 Yes, this is definitely what wealthy German aristocrats wear around the house. There is some homoerotic tension between Baron von Glower (left) and Gabriel (right), but it largely plays out on a symbolic level. (Credit: Sierra. Fair use.)

In point-and-click adventure games, you typically walk from scene to scene, pick up items, talk to other characters, and solve puzzles. You do all these things in The Beast Within, but in addition, every click can lead to a video clip. Click on a door? Prepare to watch a video of Gabriel walking through it. Click on a newspaper? You’ll see a video clip of Gabriel picking it up and reading it.

Thankfully, you can skip each of those videos with another click, which you’ll do a lot as you revisit familiar scenes to search for clues. This is a 1990s game, so expect to do a fair bit of pixel hunting to figure out exactly what to click on.

Many of the puzzles are straightforward, but to advance, you have to carefully explore every location, which sometimes feels like you’re playing a hidden object game. Just like in the first Gabriel Knight, time stands still until you’ve done everything the game expects you to do. At least the map view offers hints that there’s stuff left to do in certain locations.

This is a Sierra game, so you can die at several points throughout the story, and some scenes involve carefully timing your actions. The chapter structure gives you some confidence that you’re on the right track and that you haven’t forgotten some key item that you need later. 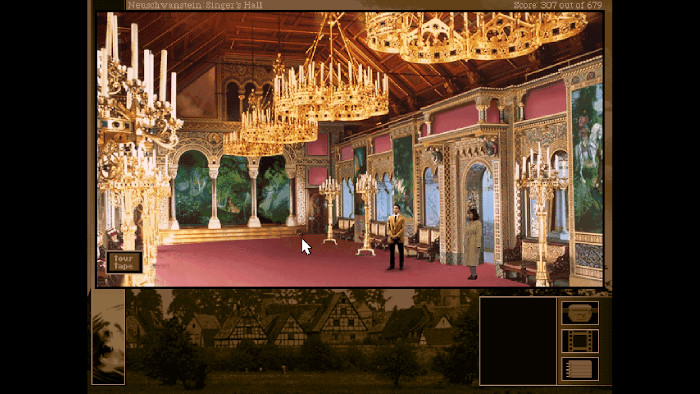 While Gabriel hunts for werewolves in Munich, Grace Nakimura goes on an edutainment trip to German castles and museums. (Credit: Sierra. Fair use.)

In many different ways, the game’s reach exceeds its grasp. The budget wasn’t sufficient to actually film in Germany. Much of the video was shot in front of a blue screen, with digital photographs taken during one trip to Germany inserted in the background.

In one scene, Gabriel walks around in a badly digitized version of Munich’s Marienplatz and has to deliver a letter. Because the developers didn’t recognize what German mailboxes look like, you must walk past a prominent mailbox that you can’t interact with. Instead, you have to find an nondescript building with a digitally inserted “POST” sign to send your letter.

As with many movies and TV shows, when there’s spoken German, it’s often read atrociously by American actors, but it’s at least consistently grammatically correct. There’s no logical consistency as to when Germans are speaking German and when they’re speaking English (to each other).

The quality of the acting is very hit-or-miss. Gabriel (played by Dean Erickson) seems fidgety and uncomfortable in almost every shot; Grace (played by Joanne Takahashi) is exaggeratedly rude and confrontational in much of the early game. Some of the other actors are delightful to watch, especially Peter Lucas, who plays the charismatic Baron Friedrich von Glower.

Does The Beast Within hold up in 2021? Even today, the game’s size and scope impress. It manages to tell a complex story that’s largely internally consistent and satisfying. FMV games are often short—think 2-4 hours. To beat The Beast Within, plan for 10-15. The game culminates in a wonderfully ludicrous final chapter that involves a short opera specifically written for it.

Very few point-and-click FMV games exist, and The Beast Within hints at why: it’s expensive and difficult to get right. The game’s mechanics and technical flaws have aged more poorly than many pixel art games from the same era. Yet, to this day, few companies have done a better job than Sierra at combining film and game.

If you’ve played and enjoyed the first Gabriel Knight, you won’t want to miss The Beast Within, warts and all. The FMV genre is currently experiencing a revival with indie titles such as Dark Nights with Poe and Munro and Her Story. Fans of the genre may also want to check out this 1995 classic to see how it compares to more recent efforts.