How a civilization was lost 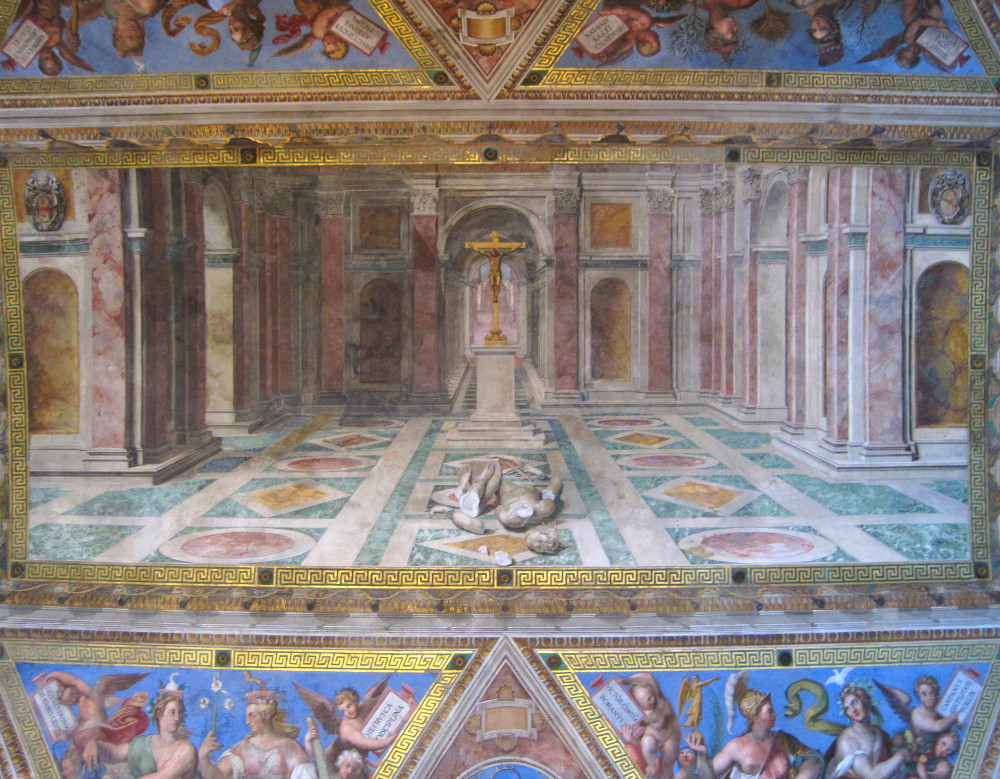 Triumph of Christianity over Paganism. 16th century fresco by Tommaso Laureti decorating the ceiling of the Constantine Hall in the Vatican Palace. (Credit: Jean-Pol GRANDMONT. License: CC-BY-SA.)
From the comfortable distance of a privileged life in the 21st century, it is perhaps easy to see that the Roman Empire was doomed. Having replaced oligarchy with permanent dictatorship, the empire sustained its ambitious civilization-building effort through slave labor and the spoils of expansionist wars. Internal unrest and foreign invasions were sure to follow. What role did religion play in this collapse?

Catherine Nixey’s book, The Darkening Age, makes the case that Christianity added fuel to the fire: quite literally in the form of book burnings or the melting down of statues, and figuratively through its embrace of a fanatical, exclusionary belief system that made it impossible to re-build or preserve a crumbling society.

Nixey knows her stuff; she studied Classics at Cambridge and subsequently worked as a Classics teacher for several years, but she is first and foremost a journalist, and her book tells history much in the way a writer like Erik Larson does: as a story with characters, sometimes picking the source that best fits the narrative, rather than attempting a neutral presentation of all possibilities of what happened.

In evidence of her thesis, Nixey marshals both “pagan” and Christian primary sources and cites recent modern research, such as Eberhard Sauer’s The Archaeology of Religious Hatred (Tempus, 2003) and Dirk Rohmann’s Christianity, Book-Burning and Censorship in Late Antiquity: Studies in Text Transmission (De Gruyter, 2016). The key themes of her book can be summarized as follows:

You may think there is a consensus among modern historians about these claims, but there is not (this is, after all, a society still rooted in the very origins that are at issue). As Nixey acknowledges, many historians have painted a very different picture. Today you’re just as likely to read that polytheism simply grew out of fashion, or that the Dark Ages “weren’t really dark”, or that Christianity was a benign and civilizing influence during a chaotic time. Don’t even think to draw modern parallels!

Yet, as Nixey demonstrates, those parallels are all too obvious, and they are instructive, which is indeed why apologists prefer to ignore them. Nixey points out that Christian statue-smashers defaced the same beautiful statue of Athena at Palmyra that ISIS would completely obliterate more than a millennium and a half later, with similar “reasoning” (“The Prophet Muhammad commanded us to shatter and destroy statues.”).

Apologists claim that when early Christians burned books about “sorcery”, surely they contained just that—not science or philosophy! But we find no such nuance when we look to modern claims of “sorcery” by religious fanatics, such as when the Taliban sacked Afghanistan’s Meteorological Authority in 1996 because weather forecasting is, of course, sorcery. Christian fanatics who call Harry Potter “Witchcraft Repackaged” don’t draw the distinction between literature and religion.

Just as it did not in ancient Rome, tolerance rarely lasts long after religions gain political power. In the United States, where evangelical Christianity still has somewhat of an underdog status, religious extremists who oppose evolutionary theory merely ask that schools and universities “teach the controversy” (while funneling taxpayer funds to schools that teach only creationism). In Turkey, where Islamists have substantial political power, evolutionary theory was recently banned from textbooks.

In short, the counterarguments to Nixey’s thesis fall apart precisely when one observes and compares religious fanaticism in any of its modern manifestations that are more easily studied than texts from the 4th or 5th century (and less subject to manipulation, omission, and re-interpretation over the centuries). The fanaticism Nixey describes is, sadly, far from unique or remarkable, and its intellectual legacy is still with us today.

In The Queen of Spades, a short story with supernatural overtones, Alexander Pushkin wrote: “Two fixed ideas can no more exist together in the moral world than two bodies can occupy one and the same place in the physical world.“ By that standard, two ideas could not be more fixed than those of polytheism and monotheism. How does one tolerate the intolerant?

Christianity was not the only cult of its time that made singular claims to the truth; it was merely the one that ultimately prevailed. But far from being a force for peace or preservation, it added fuel to the fire of Rome’s—probably inevitable—collapse.

A fierce, hateful religion (and that is what this iteration of Christianity was) could never have gained such momentum in a healthy, stable society. But under conditions of instability and inequality, it accelerated and ultimately cemented the loss of a civilization. That is the key lesson to carry into the 21st century, and Nixey deserves much credit for writing an accessible book to do so.