The idea of cursed letters (“Send this to 10 friends or you will die”) and other artifacts of death is a common horror trope. It is also the premise of The Letter, a horror game by Philippines-based Yangyang Mobile. The game was originally crowdfunded via Kickstarter.

The Letter is set in a small fictional English city named Luxbourne. Isabella Santos, a young real estate agent, is tasked with selling the Ermengarde Mansion, a 17th century property rumored to be haunted. In the mansion, she encounters a malevolent presence that almost kills her—and she finds a cursed letter written in blood.

The game mostly plays as a fully voice-acted visual novel, but it features a few (skippable) quick time events. In each chapter, you play as a different character:

You are offered choices throughout the story. Some may lead to an early death of the character you are playing, but unlock new branches of the story later. Other choices influence the relationships between the characters: Will Ashton and Rebecca become lovers, or remain friends? 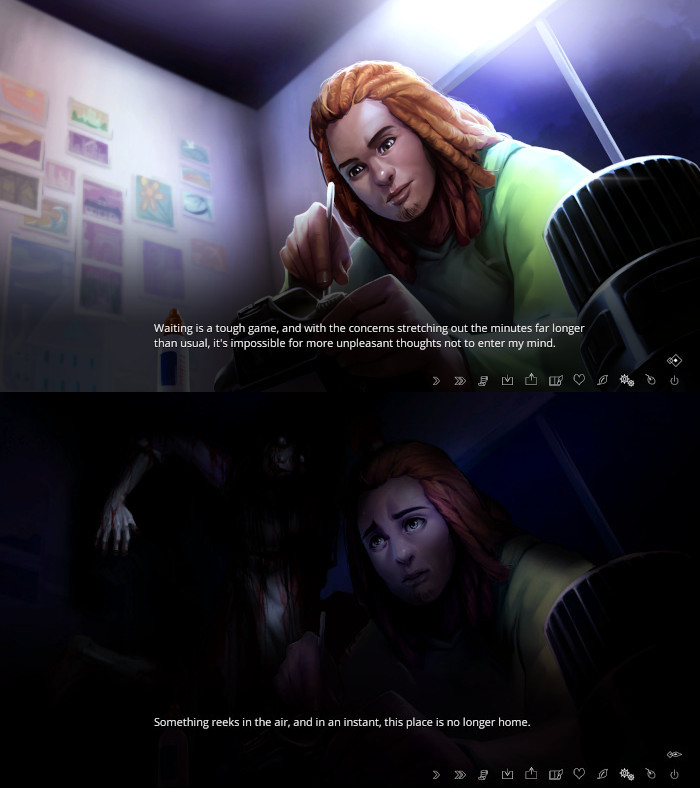 Throughout the game, everyday scenes are transformed into nightmares as Isabella and her friends are haunted by a malevolent entity. (Credit: Yangyang Mobile. Fair use.)

The chronology of the chapters is overlapping: you experience some of the same moments from the perspective of different characters, with their inner voice adding new layers of meaning to dialog you have already heard. A journal records significant events in the story, which is a very helpful feature if you take longer breaks between sessions.

Unfortunately, most of the characters have a tendency to blather. Where one line of inner voice text would have sufficed, we get many paragraphs of overwrought observations, recollections, and reflections. The text would have much benefited from copyediting—both to cut the fat, and to catch the occasional grammatical error or typo.

Overall, while the writing won’t win any awards, it is good enough to carry the story. Here is a short sample:

The long slog from Anslem Village by foot has already been made difficult by the light drizzle and biting winds buffeting against my body, every few seconds. By the time I’ve found cover under the trees lining the vicinity of the mansion, my shoulders are already drenched.

The paragraph sets the scene just fine, if you overlook its small imperfections (“already … already”; the slightly odd construction of the first sentence).

The text is supported by lovingly crafted visuals: animated backgrounds, animated characters, cut scenes, flashbacks. In some scenes perspective or proportions are a bit off, and the depiction of female characters like Rebecca and Hannah seems to primarily serve the male gaze (exaggerated jiggle physics included whenever they appear on the screen). Nevertheless, the art feels fresh and original, and it is the game’s strongest quality. 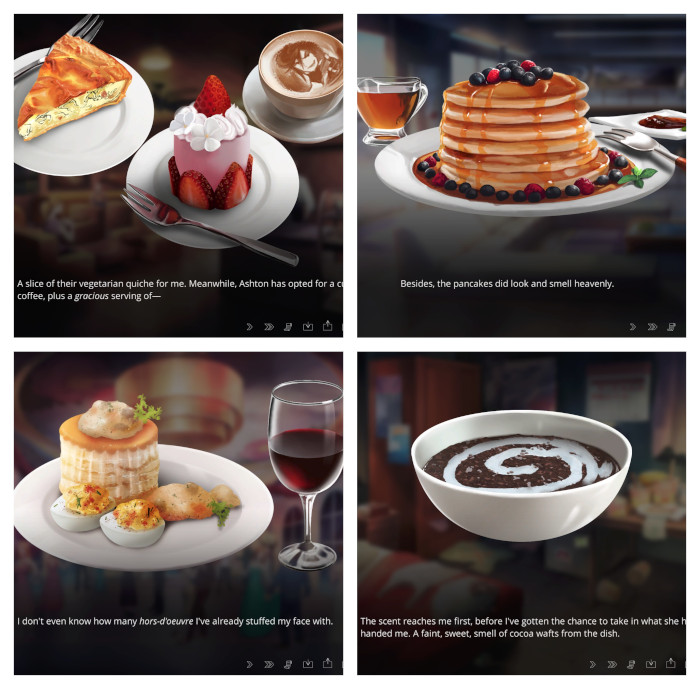 The game has an odd, amusing obsession with detailed images of food. Note the interesting latte art. (Credit: Yangyang Mobile. Fair use.)

The Letter may take you 15-30 hours to complete, depending on how many endings you want to see, and whether you skip through some of the text. That makes it a surprisingly long game, and this is really its biggest problem. Simply put, the game’s reach exceeds its grasp.

About two thirds of the way in, I found myself getting increasingly impatient and frustrated with the writing, but too invested in the story to stop playing altogether. The ending I got was underwhelming, and I decided to watch YouTube videos to see the alternative endings, because getting there myself would have been too tedious.

As an indie effort, The Letter is impressive in its depth, ambition, and love for detail; as a game, it falls short. My recommendation: keep an eye on Yangyang Mobile, and pick up The Letter at a discount if you find the art and premise appealing.