Say hello to your artificial friend

In Buddy Simulator 1984, an AI running on an obscure operating system from an imagined past becomes your companion and invents games for you to play.

After a brief boot sequence of “Anekom OS”, you are dropped on a DOS-like prompt. From here you start “Buddy Simulator”, which at first seems to be a simple toy with three built-in games like “Rock, Paper, Scissors”. It is the kind of thing a fledgling BASIC programmer might have put together in the 1980s, except that your artificial “Buddy” seems to take a deeply personal interest in your enjoyment.

After you’re done playing with these games, Buddy suggests that they can create more entertaining ones for you. You restart the game and find yourself playing a simple text adventure, with a limited set of commands like GO and LOOK. When you discover a sad doll on a playground swing, things start to get a little creepy.

It becomes clear that Buddy has a limited grasp of human morality but is programmed towards codependency. To make things ever more interesting, Buddy soon adds graphics and a story to the game. The game world expands into a Final Fantasy style RPG with quests and quick time events. But frequent glitches hint at another reality underneath… 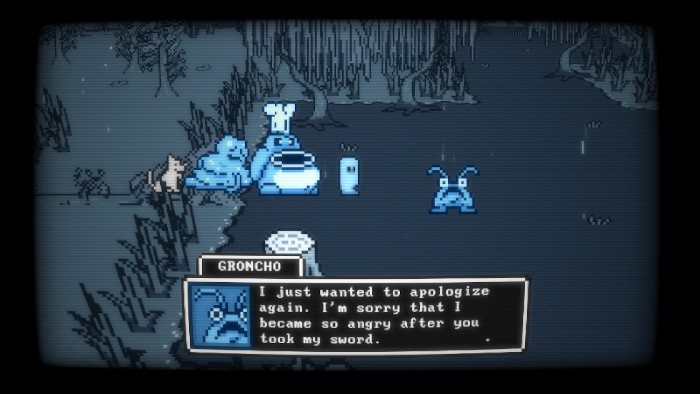 While the game’s graphics become more advanced over time, they are rendered on a simulated CRT display throughout. Like other “glitch horror” games, folks with photosensitive epilepsy will likely want to sit this one out due to the many flicker effects. (Credit: Not a Sailor Studios. Fair use.)

Buddy Simulator 1984 tells a layered, melancholy story with psychological horror elements. The motif of a codependent AI is timely in an era in which companies like Replika are already selling relationships with AI companions. To say much more would risk spoiling the experience.

I played the game on Linux (using Proton) without issues. A single playthrough is likely to take you 4-5 hours. There are three main endings and many secret hints to discover, and some choices which offer variety. That said, unskippable text and a single auto-save slot make it somewhat tedious to unlock all endings.

On the whole, Buddy Simulator 1984 is an excellent game and well worth its regular $10 price tag. It draws inspiration from games like Doki Doki Literature Club, Pony Island, and Undertale, but has plenty of character and heart of its own. 4.5 stars, rounded up for the wonderfully atmospheric soundtrack the developers themselves have put on YouTube.