Went here for lunch after finding most of Llanidloes closed. The staff were incredibly friendly and talkative, and the food was amazing. I had a halloumi burger, which I would highly recommend. The HPA (a beer) was also supposedly excellent, as was the cider. Will definitely visit again.

We went here for lunch on our way home from Edinburgh. Nothing but delicious meals and great service, and plenty of choice for gluten-intolerant people. The restaurant itself was calm and quiet, no doubt because of its location. I am led to believe that the beer is excellent also.

I went on this tour with my family, and loved every minute of it! There were jumpscares and jokes, amazing special effects (such as birds flying overhead on cue), and a brilliant and immersive retelling of Edinburgh’s history. The two who were running it seemed jolly and excited, and perfectly presented their characters. Would go again.

Friendly staff, great service and delicious pizza. What more could you want? Plenty of choice for gluten-intolerant people (coeliacs), and the leftovers were boxed up within seconds of us asking, for us to take them home. Will definitely visit again.

A brilliant day out

This was a brilliant day out! The illusions themselves were varied and interesting. Everything from automata to plasma spheres to a mirror maze. The camera obscure was very interesting and was presented awesomely by the staff. I would definitely visit again.

I went here for breakfast on my trip to Edinburgh. The food was great and the staff were friendly. There was also plenty of choice for coeliacs (people who are gluten-intolerant). The choice of music (mostly rock, alternative, and grunge) that was playing was also fantastic. Would definitely visit again.

Written by RandomWolf on 8/3/2022, 12:27:35 PM
Permanent link
The Ship On The Shore
www.theshipontheshore.co.uk
More reviews and information

I visited this restaurant with my family on our first night in Edinburgh. We had been wandering the area for a while, searching for a restaurant that was open, not too expensive, not too busy, and that served gluten-free food. We found it at The Ship On The Shore. The staff were cheery and helpful, and there was a good selection of drinks. I had the linguine, followed by limoncello sorbet, which were exquisite. While the entire meal was a bit more expensive than we are used to, I would say that it was worth it for such an enjoyable meal.

The WiFi was not working and the beds were a bit uncomfortable, but the staff were friendly and helpful, the rooms were clean and it was, overall, pretty good for a budget hotel. The hotel is also not far from the city of Edinburgh, so breakfast and entertainment are well within reach.

An ode to the joy of free expression

You don’t know what to expect from the odd-looking wooden box which now holds pride of place in your living room. You turn it on and fumble with the controls for a while. Suddenly, the voice of an opera singer pierces the static.

It’s like magic, coming to you through the air, filling the world with possibility and wonder.

What is it like to witness the birth of an invention set to transform humanity? I was not around when radio was invented, but I did experience BBS culture and the early web of the 1990s. It was a time when millions of people were “coming online” for the very first time, without any idea of what that meant. The Internet, as David Bowie put it in 1999, was “an alien lifeform”.

The past that wasn’t

Hypnospace Outlaw is a 2019 indie game that lets you experience the birth of a surreal alternative reality version of the early web. The year is 1999. You are a community enforcer in hypnospace, a web-like network accessed through special headsets people wear during their sleeptime.

You play the game through a desktop environment that looks a bit like Windows 98, macOS and Microsoft Bob were put through a blender. It comes with a browser, an email-like messaging app, a virtual wallet, and a download manager. 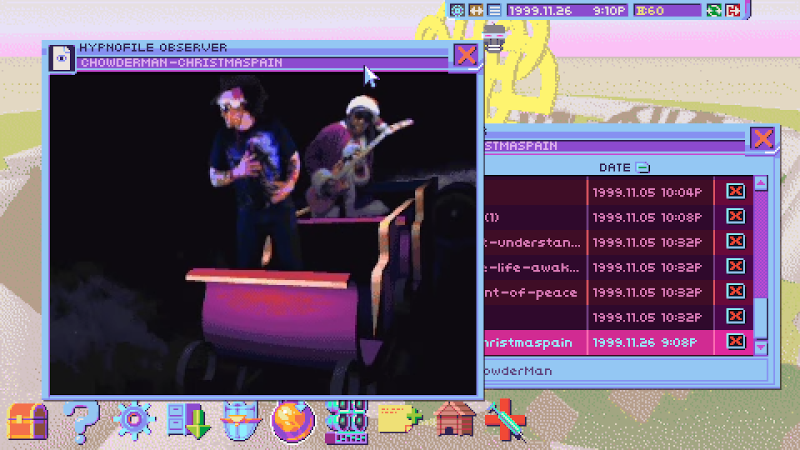 You interact with the world of Hypnospace Outlaw through a desktop environment that combines the best and worst of computing around the turn of the millennium. Fortunately, downloads are a lot faster in this simulated reality. (Credit: Tendershoot. Fair use.)

Unlike the web, hypnospace is controlled by a single corporation, Merchantsoft. Its customers can create pages, which are organized into different communities like “The Cafe” and “Goodtime Valley”. On the surface, it resembles web communities like Geocities or its modern-day nonprofit successor, Neocities.

Yet, as the player, you are keenly aware that this is not the early web but an alternative history. You don’t know the rules of this world, but you are tasked with enforcing them. Soon, you receive your first assignment: to trawl hypnospace for copyright violations. Maybe this alternative reality isn’t so different after all…

Much of the gameplay is exploratory: browsing pages, downloading and trying little apps, getting rid of viruses that came with the apps you just tried, and so on. The assignments you receive guide you through the game’s larger narrative and timeline.

Music is everywhere in Hypnospace Outlaw. The game world is suffused with fictional bands and their creations, from the optimistic MIDI sound of the Millenium Anthem to hyper-commercial, autotuned “coolpunk”; from “Seepage” tracks that sound like Linkin Park demo tapes to the wonderful ridiculousness that is “The Chowder Man”. 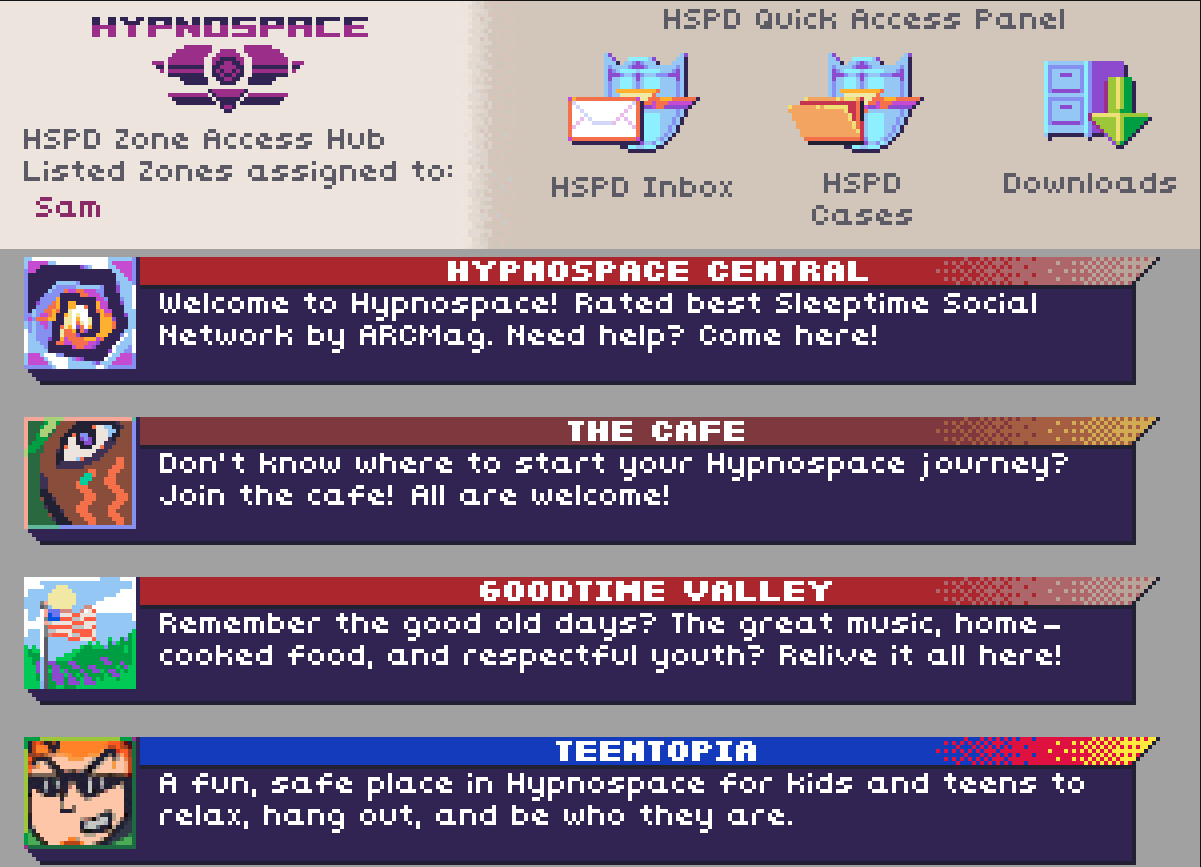 The communities you interact with in the game are haplessly curated by the Merchantsoft corporation, though you’ll soon discover corners of hypnospace that have eluded its control. (Credit: Tendershoot. Fair use.)

It really does feel like you’re back in the late 1990s, building a library of MP3 files from dubious sources and trying to figure out what’s actually worth listening to when you can listen to anything.

Amidst the surrealism of it all, the game does have things to say: about commercial control over online communities, about critical thinking, and about the pure joy of free expression in a nascent medium. As I reached the end of the story, I found myself far more emotionally invested than I expected.

I recommend Hypnospace Outlaw without reservations; it truly is a small masterpiece of immersive storytelling. But I would suggest keeping it in your backlog until you have a few hours at your disposal and are ready to fully engage with its world.

This is not a game to rush through, but an experience to savor. As Fre3zer would put it: you gotta “chill it right”.