A space beacon you'll keep coming back to

FTL: Faster Than Light is now more than 8 years old, but it looked outdated when it was released. Start up the game, and you’re greeted by a low-resolution “LOADING” font, followed by a static title screen featuring a fleet of spaceships parked ominously in front of a planet. The first hint that this game has hidden depths is its memorable title theme, wonderfully evocative of the quietude of space.

The story is told in the simplest terms: You command a lone federation starship that is on the run from the malignant Rebellion (think US Civil War rebels, not Star Wars rebels). Your faster-than-light drive lets you make jumps from one galactic beacon to the next, through several sectors of space that are newly generated on each playthrough. You’re trying to reach the last stronghold of the federation, in order to defeat the Rebel Flagship that’s threatening to destroy it.

Almost every galactic beacon holds a story, or part of one: you run into slavers, traders, pirates, and rebels; you rescue raving madmen and space colonists; you find weaponry and treasure. You often get to make choices, with randomized outcomes. (Stay clear of the Giant Alien Spiders until you know what you’re doing; they are no joke.) At first these scenarios may seem repetitive, but your options will increase depending on your ship and crew. 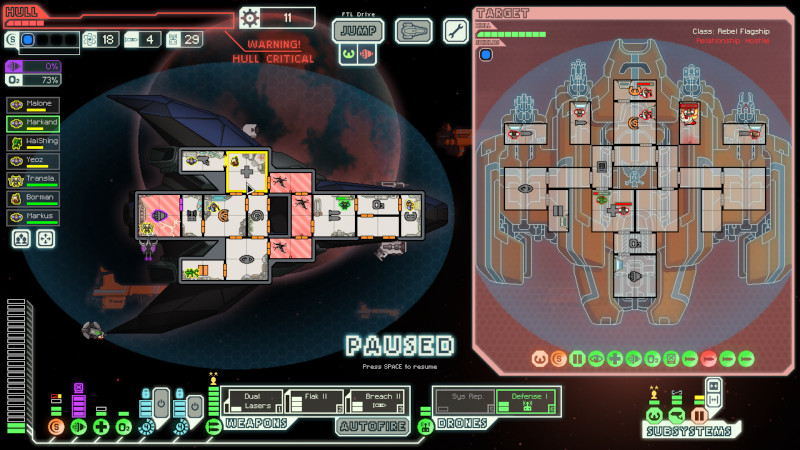 We’re about to get blown to bits by the rebel flagship. (Credit: Subset Games. Fair use.)

Many encounters turn into ship-to-ship battles, and that’s where the game really shows its genius. Combat takes place in a real-time-with-pause system that allows you to plan your every move, or to shoot from the proverbial hip. Planning is often advisable, as you may find yourself at a disadvantage even in early encounters.

Each of your ship systems matters, and so does each of theirs. Do they have teleporters, which they’ll use to board your ship and fight your crew? Are you able to hack into their systems, maybe sabotage their shields or their cloaking device? Do they have a flak weapon that will shower your ship with debris? Can you use that asteroid field in your favor?

Some battles are unwinnable (given enough time, you can try to jump away), others will only seem that way to the new player. But it’s almost always fun to figure out what you can do with the cards you’ve been dealt, and to master the ship you’ve chosen to command. There are 10 ships to unlock, and different layouts for each, demanding very different styles of play.

There’s more that could be said about the game’s systems, from ship upgrades to crew recruitment and experience, from drone warfare to oxygen management. In its totality, the game really makes you feel like you’re commanding the crew of a spaceship, and your imagination fills in what the simple graphics cannot.

From this description and from screenshots, FTL may appear like a dauntingly complicated game, but this is where the game’s second core strength lies: an absolutely delightful user experience. Move your mouse across the screen, and you’ll get helpful explanations; keyboard and mouse shortcuts are readily available for everything you need often.

How do you increase or decrease the power for the shield systems? In many games, you’d have to click a “+” and “-” button, or drag a slider; in FTL, you left-click to increase, right-click to decrease, or use a keyboard shortcut. And so it is with the rest of the UI: easy to learn, quick to repeat.

I’m a big fan of NetHack (one of the early games that gave us the term “roguelike”), and FTL is the closest equivalent with a space opera setting that I have encountered. The low-friction user experience is a huge part of what makes it all work—it allows you to focus on story and strategy, instead of mechanics that get increasingly annoying through repetition.

Every roguelike tends to claim that “losing is part of the fun”, and in the case of FTL, it’s usually true. Except for when you’re getting hammered by pirates while solar flares are lighting every part of your ship on fire, for the 15th time…

5 stars, no contest. I honestly can’t say enough good things about FTL—it’s a masterpiece of indie game development that has made developer Subset Games an industry legend (their second game, Into the Breach, is very different but no less luminous). The native Linux version works beautifully, and the game is available in 10 languages. There are also amazing-looking mods, but I have not tried them yet.

Even at $10 on GOG, the game offers excellent value (as of this writing, I’ve put some 100 hours of play into it) but it regularly goes on sale for far less. Be aware that this isn’t a fair game—as with most roguelikes, the RNG will put you in impossible situations—and if that tends to prevent you from having fun, you may want to avoid it. For everyone else, FTL continues to be a beacon calling us to assist the federation, just one more time.