A pioneer in the emerging domain of constructive journalism

Natural selection has equipped our species with brains that pay special attention to negative events. We monitor the world for threats to our well-being, and we enforce in-group social norms by ostracizing those who violate them.

Our modern media ecosystem kicks these reasonable sensitivities into overdrive and produces pathological feedback loops. A celebrity’s stupid offhand remark in an interview may trigger a multi-day cycle of outrage; a terrorist’s violent act may dominate collective attention for weeks.

This is not without consequences. We become vulnerable to manipulation and demagogy. We become polarized. We become depressed. Negativity spreads on its own. It is positive, constructive engagement with the world that takes effort.

Positive News wants to help. A public benefit co-operative based in London, owned by authors and readers, it’s both a print magazine and a website dedicated to what it terms “constructive journalism”. This isn’t about images of puppies (not that there’s anything wrong with those) or about seeing the world through rose-colored glasses. Instead, Positive News focuses on stories that show how difficult problems can be solved or at least chipped away at. 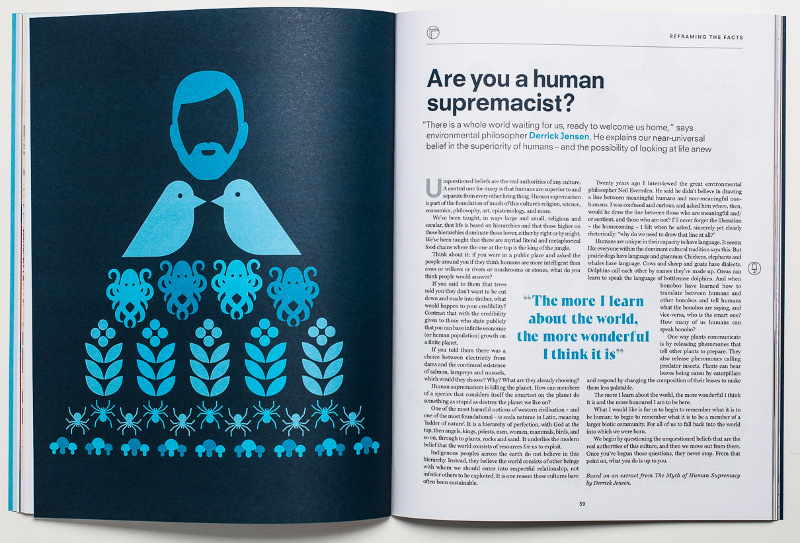 The magazine is beautifully designed, with appealing typography and layout, and large format photographs and illustrations

Positive News has been around for a while. It was started as a quarterly newspaper in 1993 but was relaunched as a magazine by editor-in-chief Seán Dagan Wood in 2015. The crowdfunding campaign for the co-op raised £263K (about $340K). The co-ownership model is becoming increasingly popular in the UK — nonprofit magazine New Internationalist launched a similar campaign earlier this year and raised £704K.

As part of its crowdfunding campaign, Positive News published a business plan, which includes long-term revenue goals. I was not able to find public information about revenue and spending beyond the plan, and have not received a response to an email inquiry. That said, the numbers here are still too small to worry about excessive compensation or bloat.

With a small budget, the site has managed to build a sizable social media presence, especially on Facebook, where it has more than 250K followers. Several multi-million dollar nonprofit journalism organizations we’ve reviewed do not come close to those numbers.

Positive News is largely funded by print subscriptions. Subscribers get access to a digital version, but it’s impossible to directly buy individual issues of the magazine in digital form. The “Own the Media” campaign website is still up, but no community shares are currently up for sale.

There are no ads on the site, but there is a page dedicated to “brands of inspiration” — essentially a selective approach to sponsorship. Occasionally, staff writers write longer articles about these brands (which disclose the sponsorship).

That approach isn’t without risks — would Positive News report fairly about a competitor that doesn’t want to be a sponsor? Would it include legitimate criticisms? Do readers fully understand the sponsorship relationship? While all the featured businesses tend to be in the green/organic/pro-social category, the criteria for becoming a partner are not public.

I don’t want to overstate the issue. Positive News is not in the business of writing exposés about corporate abuses, so it is unlikely the sponsorship will clash with investigative work. And in any case, only two such sponsored “advertorials” can be found on the website so far. Still, a more transparent process for selecting partner brands would be welcome.

Like the magazine, the website design puts photographs and illustrations front and center — perhaps a bit at the detriment of readability for shorter articles

The website publishes feature-length articles and short newswire pieces, categorized into sections such as “lifestyle” or “economics”. Just like the printed magazine, the site is very visual, placing significant emphasis on design, typography and large lead images.

The site uses Disqus for comments. Activity is low (most conversations happen on the site’s Facebook feed) but there is little trolling or negativity in the comment section.

Although the organization is based in the UK, much of its reporting is international in nature (some is syndicated from other sources, including NGOs). The articles tackle tough subjects: climate change, terrorism, racism, and so on. But they focus on people working on solutions (“on patrol with an all-women anti-poaching unit”; “5 grassroots responses to terror attacks”) rather than on simply pointing out the gravity of problems.

For the most part, this isn’t about replacing bad news with good news — it’s about restoring a sense of agency. I found the reporting reasonably dispassionate, but it typically only scratches the surface and is not evaluative in nature (“does this work?”).

I recommend adding Positive News to your media diet: 4 out of 5 stars. I am swayed by the argument that constructive journalism is psychologically valuable, and it undeniably brings attention to important causes. It also may inspire readers to replicate good ideas.

The organization behind the site would benefit from greater transparency about its revenue model and its plans for the future, especially if it intends to further pursue sponsorships and advertorials which may compromise real or perceived impartiality.

The site’s large social media reach demonstrates that there is a growing hunger for this type of journalism. Other media ventures would do well to consider how they can provide similar value to their audiences, e.g., by doing more feature reporting on solutions as opposed to problems.