A critical view of global events, featuring authentic voices from around the world

In the social and political upheaval of the 1960s and 1970s, many socialist and progressive publications were born. Most are long gone; New Internationalist, founded in 1973 in the UK, is a notable exception. Not only has it survived well into the 21st century, it has proven its adaptability through a crowdfunding campaign that raised more than $900K in donations.

Through its history, the publication has focused on liberation and decolonization movements around the world and on the global impact of unbridled capitalism. It was one of the first publications to highlight the dangers of Nestlé’s efforts to market infant formula milk in the developing world; decades later, it played a similar role in raising awareness of fracking.

A significant part of New Internationalist’s ethos is to “give space for people to tell their
own stories”, that is, to feature international writers instead of Western “experts” and correspondents. This helps to lend an authenticity to its reporting that many other publications lack. 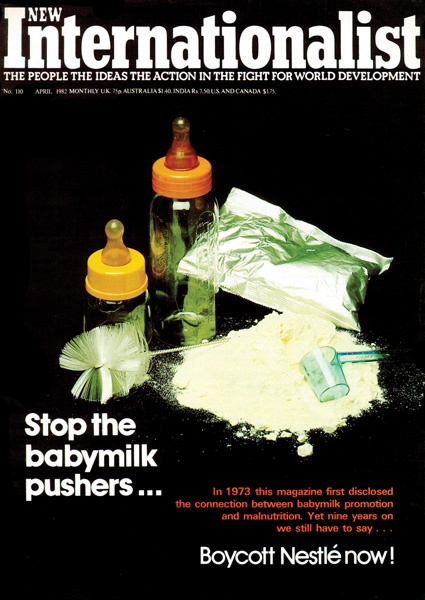 New Internationalist also operates the Ethical Shop, which sells books, calendars, clothing, and various other merchandise. This includes original publications, such as the series of “No-Nonsense Guides” on topics ranging from global finance to drug legalization. Other products are sold together with partner charities. The shop follows a Buying Policy that seeks to promote good labor and environmental practices.

While it tends to support left-wing politics, New Internationalist is not an explicitly socialist magazine.

Many of the US-based nonprofit media we have reviewed are dependent on grants, awarded from the fortunes amassed by the likes of Bill Gates, Michael Bloomberg, George Soros, Herbert Sandler, or previous generations of industrialists. This can create a bias towards elite audiences and away from highly contentious topics (see, e.g., Rodney Benson: Can foundations solve the journalism crisis?).

In contrast, the revenue supporting New Internationalist comes from people buying digital and print publications, or ordering other products from the Ethical Shop. This is broken down in percentages in the 2013/14 Annual Report, which does however not include GBP (£) figures. Indeed, the New Internationalist website includes no direct reference to organizational internals, and I did not receive a response to a contact inquiry asking for more recent information.

This lack of transparency is all the more regrettable given that the organization is run as a co-op with a non-hierarchical structure, very unlike the top-down model that is typical for US nonprofits. The rest of the world would benefit from learning more about this approach from those who practice it.

As of this writing, New Internationalist has about 37.8K followers on Twitter and about 80K on Facebook. These numbers should have some room to grow; consider, for example, that Positive News (also UK-based, also a co-op, with a smaller budget and smaller print circulation) has about 260K Facebook followers.

The New Internationalist website is a minimalist feed of articles that mixes shorter posts and features, without any apparent prioritization beyond recency. Stories are tagged with regions and topics, which can be used to explore the large library of articles. The site is reasonably mobile-friendly. Some readers may have difficulty with the relatively low contrast color scheme (an unfortunate recent design trend).

The Android app works well enough, though there are a few annoyances; for example, wide tables require horizontal scrolling, but accidental “swipe” gestures trigger moving from one article to the next, making it almost impossible to actually view wide tables. On the plus side, the article text is readable, and tables are presented as tables rather than as embedded images. 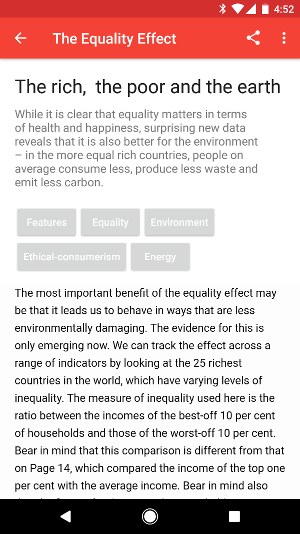 You can purchase full copies of the magazine via the Android and iOS apps.

An alternative to buying copies through the apps is purchasing them through Zinio and reading the magazine through its dedicated reader. As far as I can tell, there is no option to purchase and download DRM-free PDF files, and I found no evidence that any part of New Internationalist (web or app) is developed as open source software. New Internationalist articles are under conventional copyright (as opposed to a Creative Commons license).

While not all content is available for free, many feature stories are posted in full. “The Equality Effect” is such a feature story, written by Danny Dorling, Professor of Geography at the University of Oxford and author of a book with the same title. In fact, much of the July issue was dedicated to the issue of inequality and edited by Dorling.

The article is analytical, making the case that inequality is the source of a large number of social ills, and not at all unavoidable. Rather than promoting a specific political ideology, Dorling is making a case to consider policies addressing inequality on their merits:

Although leftwing and green politicians tend to advocate greater equality more vocally, and rightwing and fascist ones tend to oppose it, equality is actually not the preserve of any political label. Great inequality has been sustained or increased under systems labelled as socialist and communist. Some free-market systems have seen equalities grow and the playing field become more level. Anarchistic systems can be either highly equitable or inequitable.

At the bottom of the article is a carousel of “related articles”, some from the same issue. It’s easy to miss that Dorling wrote another piece in the July issue expanding on his argument: “The rich, poor and the earth”. It cites additional data and attempts to show correlations between inequality and waste production, CO2 emissions, and meat consumption. 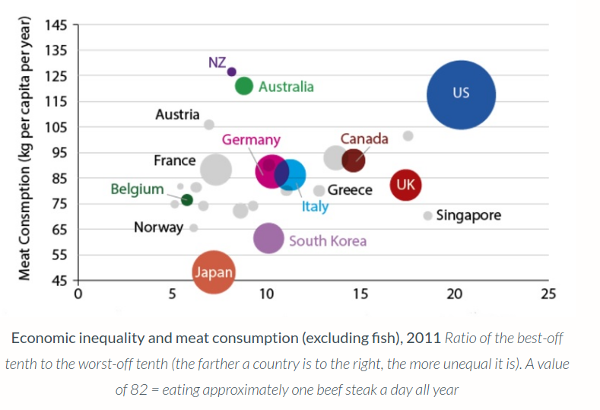 As presented, this chart does not support the thesis of the article that inequality is meaningfully correlated with meat consumption, let alone that there is a causal relationship.

Skeptical readers will find the analysis here to be lacking in rigor. Dorling dismisses outliers; in the case of the “meat consumption” chart, France, Germany, and the UK show very similar levels of meat consumption in spite of large differences in inequality. Eliminate the US and even the appearance of a correlation largely disappears; in any case, a correlation coefficient is not given.

With these kinds of charts, there are many ways to demonstrate the result you want: by cherry-picking countries, by picking the measure of inequality that shows the strongest correlation, and by only considering alternative explanations for data points that disagree with the hypothesis (“their cultural histories are bound up with the rearing of sheep and cattle”).

Data scientists warn that much more visually compelling spurious correlations can be found between many completely unrelated measures, and that even peer reviewed science is routinely subject to data dredging and p-hacking. “Science isn’t broken, it’s just a hell of a lot harder than we give it credit for,” warned a must-read article by FiveThirtyEight science writer Christie Aschwanden.

The thematic focus on inequality is laudable, and it makes sense that New Internationalist would invite an accomplished academic writer on this topic as guest editor. In fact, the much larger Guardian also published Dorling’s bubble chart analysis uncritically. Still, we should expect a greater level of empirical rigor in unpacking complex issues such as this one.

“Civil war, mental illness, poverty, gang violence: the many roots of homelessness” is a more conventional storytelling piece from the June issue that shares personal narratives of people experiencing homelessness and housing insecurity from the Philippines, Great Britain, the United States and, Mexico.

This short article showcases New Internationalist’s strength in featuring authentic voices from around the globe. For example, Maria from the Philippines describes the economic pressure which forces her family to live in a slum:

We found a room for rent in the nearby block. It cost $50 a month. It’s expensive and eats a huge chunk of Marvin’s monthly income of $119. I can’t work yet because I have to take care of our baby, Mark. So this is our home for now.

This kind of storytelling is crucial to overcome stereotypes and to challenge the stigma often associated with homelessness.

New Internationalist is important: it sheds light on underreported injustices and amplifies the voices of activists who seek to bring about positive change. As a left-wing publication, it occupies a relatively lonely space by taking an impact-oriented international view without being stridently ideological.

It has outlasted many other magazines and successfully made its way into the 21st century, but not without stumbling. The website and apps still have a few mostly minor bugs; the site design suffers from small readability issues and lacks clear organizing principles; the level of transparency is below some other mature nonprofits of similar size (compare Truthout’s timely and comprehensive Annual Reports, for example).

You will find many stories here that nobody else is covering, with larger ambition and reach than other publications we’ve reviewed, and the editorial quality is generally high. When tackling complex topics, New Internationalist would benefit from more rigorous internal review to ensure the highest possible quality of reporting. Recommended; 4 out of 5 stars.