All the news that fits inside the Overton window 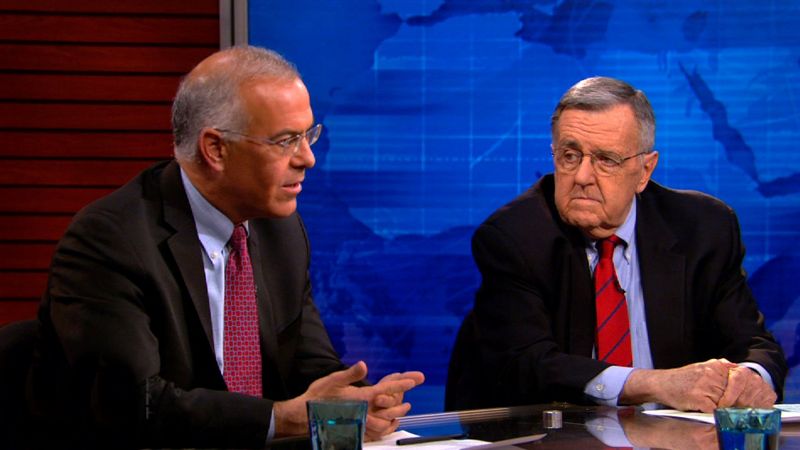 Journalists like David Brooks and Mark Shields provide background on the news, reflecting a general bias of sourcing (85% male, 85% white) that has been consistently documented.

NewsHour is the flagship public television news program in the United States, distributed by PBS and produced as a collaboration between key member stations. As with all public broadcasting in the US, it relies on a mix of funding that includes government support, corporate underwriting, foundations, major donors, and small donors. PBS programs are subject to funding standards, and an ombudsman serves as a verbose internal critic.

Executive compensation at some member stations reaches excessive levels by nonprofit standards – nearly $600K for WNET CEO Neal Shapiro (WNET co-produces NewsHour). This is a reflection of competition for talent with for-profit media (Shapiro was previously the President of NBC) and the large organizational size, but still merits scrutiny as it can reinforce leadership trading within a media oligopoly as opposed to the development of a unique nonprofit media leadership path.

NewsHour made its debut as a nightly news program in 1983. It features headlines, interviews, and some in-depth reporting. Episodes can be streamed online, and segments of the program are routinely transcribed. Probably the biggest difference with for-profit news programs is tone, not content. The program projects a sense of respectful, calm, civil engagement with the issues of the day. That’s no small thing in an era where networks like CNN employ extreme partisans just to shout at each other. Of course, it can also contribute to normalization of extremes.

As far as content is concerned, NewsHour does generally take a longer, more global view than many other news programs. It routinely features topics from US history, developments in other cultures, and so on. The commitment to balance that’s part of the public broadcasting mandate typically translates to having a center-left and a center-right guest on the show for purposes of analysis (such as the Brooks and Corn / Shields and Brooks programs).

Studies both by progressive media criticism organization FAIR and by independent researchers have consistently shown that the sources NewsHour consults for expertise and interviews are 85% male, 85% white (the US is about 72% white), and about 45% government. Public interest sources, think tanks, and corporate sources are each sourced about 4-5% of the time.

That means organizations that are deeply familiar with topics like the drug war, voter suppression, the arms trade, etc., are rarely put on the air to talk about them. In its selection of core stories of the day, NewsHour also largely mirrors the choices of other news programs. There are exceptions, such its recent in-depth feature on the under-reported United States prison strikes, which is also notable in being singular. 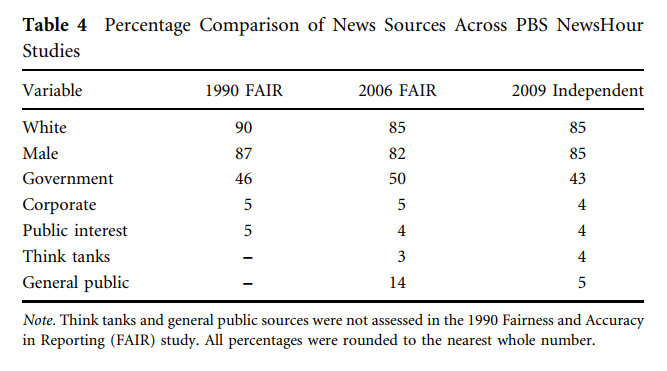 The program exists in the larger context of public broadcasting in the US, which is frequently the target of efforts to either politicize or defund it. While government funding has its perils, the reliance on major donors and corporate underwriters also comes at a cost. Most significantly, Jane Meyer of the New Yorker exposed in 2013 how PBS member stations got cold feet about programs putting the spotlight on a major donor and trustee, David Koch of the infamous Koch Brothers.

Given this combined political and corporate influence, a program like NewsHour is likely to stay firmly within the Overton window in its reporting: views that are “too radical” either on the left or on the right will rarely be aired. But of course the window isn’t fixed – it remains to be seen how NewsHour will deal with the normalization of hate, and with politics under President Donald Trump.

For the time being, I still recommend NewsHour with reservations, since it at least leans towards public interest reporting rather than pure ratings-driven entertainment. It is a good bellwether of elite opinion, and provides more nuanced and careful analysis than any other centrist US news program I’ve seen.

3.5 out of 5 stars, rounded up. If you follow our Twitter list of quality nonprofit media, you will get updates from NewsHour alongside more political and adversarial sources like Mother Jones, The Intercept, and Democracy Now!, as well as the academic perspectives from The Conversation.