I love a good romantic tale, even of the overwrought variety (I am a The Notebook enjoyer). Therefore I was happy to give Big Dipper a try, which is a short, kinetic (choice-free) visual novel about a romantic encounter on New Year’s Eve. In case you’re wondering, it’s all very chaste stuff; the title is no naughty double entendre.

Developed by Team Zimno from Russia [*], the story is told from the perspective of Andrew, a somewhat sullen young man who encounters his manic pixie dream girl when a woman named Julia literally sleepwalks into his life and his cabin.

The game throws in a bit of the supernatural, but it’s over after less than two hours, so it doesn’t really go very far with any of it. That’s a shame, because earnestly incorporating Slavic folk tales could have made things a lot more interesting!

The relationship between Andrew and Julia develops implausibly. They grow closer through sharing stories of loss of alienation with each other, but the romance is otherwise just rushed along a “they dislike each other → they love each other beyond measure” path without ever building genuine momentum. 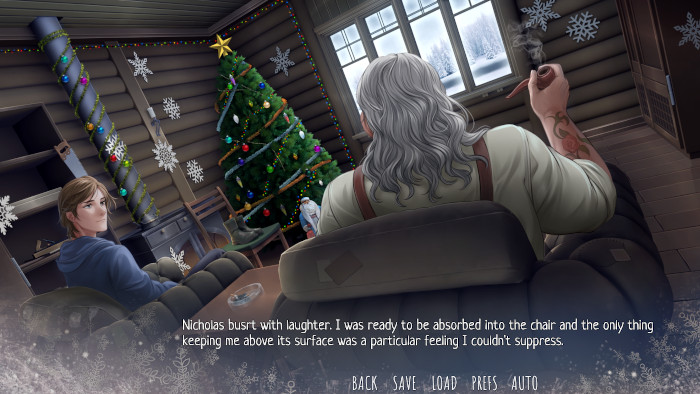 We’re only in the first scene, and there are already typos like “busrt” instead of “burst”. (Credit: Team Zimno. Fair use.)

Big Dipper certainly gets the aesthetics right. Made with Unity, the game looks better than your average visual novel, with nice animations for the snowfall outside and the cozy fireplace inside. The character art and full-screen graphics also look good, and are enriched with chibi-style pictures during key scenes.

Unfortunately, it’s hard to overlook the shortcomings. Aside from a rushed story that doesn’t withstand the slightest scrutiny, it’s difficult to justify the lack of attention to detail in the writing. You’ll notice the first typos and misspellings just a few paragraphs in, and we’re talking about glaring ones (“busrt” instead of “burst”, “cheked” instead of “checked”) that could have been caught with any spell checking tool.

Big Dipper is only $5, but you’ll find much better romantic visual novels even for free. Unless you’re desperately looking for a winter-themed pick-me-up and are willing to look past its issues, you can safely skip it.

[*] It’s worth noting that the authors have publicly spoken out against Russia’s invasion of Ukraine and against Vladimir Putin.