A solo sojourn in a space station full of 3D memories

As my reviews of Gone Home and Firewatch make clear, I am favorably disposed towards exploration games (sometimes described as “walking simulators) where the player explores a story-rich world with relatively few action or puzzle elements.

Tacoma is the second game by the makers of Gone Home, Fullbright Games from Portland, Oregon. In Gone Home, the main character (a woman named Katie) returned to an empty home and tried to find out why her family wan’t there to meet her. In Tacoma, the main character (a woman named Amy) visits an empty space station and tries to find out what happened to its crew.

But where the world of Gone Home was littered with notes and other papers for the player to sort through, Tacoma tells its story through the experiences of the crew, which Amy can review through recovered Augmented Reality recordings. The ghostly figures of the crew can be observed in conversation, taking a smoke break, or playing AR games. 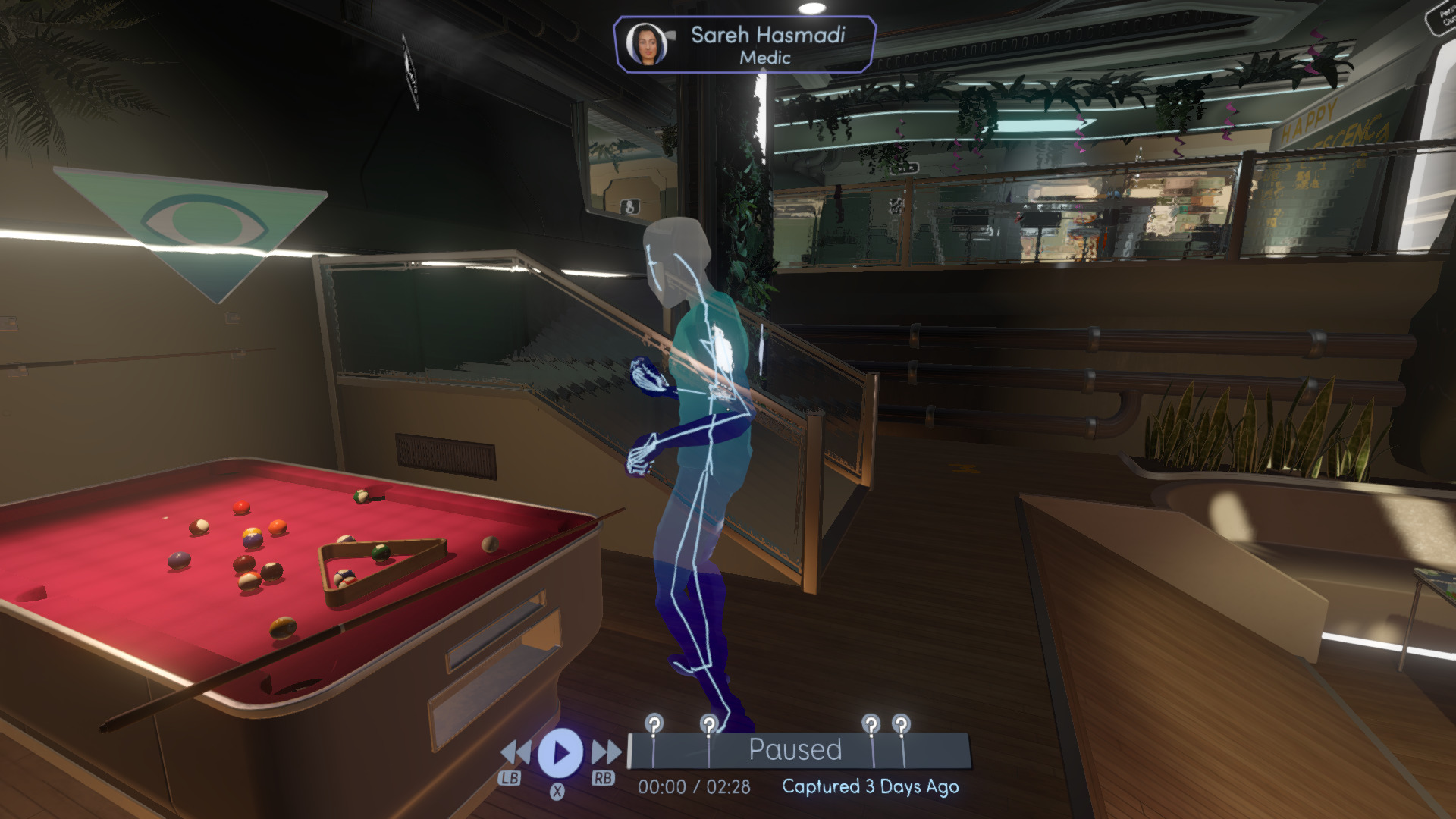 In the lounge of the space station, watching an AR recording of the station’s medical officer talking to its AI. (Credit: Fullbright Games. Fair use.)

Ostensibly, Amy’s job is to recover the valuable “wetware” that powers the ship’s Artificial Intelligence, but in the process, we are learning more and more about the events that caused Tacoma to drift through space without its crew. It quickly becomes clear that an accident happened on Tacoma, but we still don’t know the fate of the crew, and whether there is a deeper mystery to uncover.

In addition to AR recordings, Amy can access some of the crew members’ most intimate personal files—calls and instant messages, emails, private notes. Much of this does not add to the main story, but paints a more complete picture of each crew member’s motivations and emotional connections.

There are no real puzzles, but there are countless objects you can interact with, from books you can pick up to a zero-g basketball game you can play. These details serve no purpose other than to create a richer world for the player to explore.

There’s also a fair bit of world-building to center the story of Tacoma in a future where humans and AI must learn to co-exist, and a small number of corporations is fighting for control of people’s lives. This world is intelligently constructed, and whether or not you find it plausible, it’s internally consistent.

In spite of all this, you’ll likely finish the game in 2-3 hours—double that if you add another playthrough for more exploration or to access the commentary track.

In short, Tacoma is an atmospheric game that lets you feel like you’re on a space station, without having to deal with demons or aliens. As a story, I found it less compelling than Gone Home, in spite of the clever storytelling mechanics. It’s hard to become invested in any of the characters, and the clues we get about their backstories provide very little narrative payoff.

Nevertheless, I enjoyed the time I spent on Tacoma. I wouldn’t recommend paying full price for it, but it regularly drops to $5-$7.50, at which it offers good value.