These facts are not in dispute: the gun homicide rate of the United States is 25 times higher than that of other high-income countries. Last year, more than 15,000 people died from gun injuries, excluding suicides. Chicago’s number of gun victims since 2001 has exceeded US troop deaths in war zones in Iraq and Afghanistan.

It’s a system of violence sustained by a large industry. Guns and ammunition stores had revenue of about $9B in the last year, and the National Rifle Association, a nonprofit with 5M members that opposes gun control, had $348M in revenue in 2013.

Everytown and The Trace

National groups promoting gun control have long paled in comparison with the NRA. Former New York mayor and 10th richest person on Earth, Michael Bloomberg, is working to change that. To this end, he funded the advocacy group Everytown. Its action fund reported $39.5M in revenue in 2015; much of it comes directly from Bloomberg.

Beyond its lobbying and activism, Everytown has seeded a new nonprofit newsroom, The Trace, to engage in specialized reporting on gun violence.

I was not able to find a tax return for The Trace (the organization did not respond to email inquiries), suggesting it probably hasn’t filed one yet. The “About us” page credits the Kendeda Fund and the Joyce Foundation as funders in addition to Everytown; Huffington Post co-founder Ken Lerer and liberal venture capitalist Nick Hanauer are listed as individual supporters.

The Trace does not define itself as partisan or nonpartisan; it states that it simply seeks to carry out public interest journalism to shed light on the problem of gun violence. It has partnered with many other publications to achieve this goal, including The Atlantic, TIME, and the Guardian.

The article about “murder inequality” is a good example of evidence-based journalism. Its premise is that looking at city-level crime statistics is misleading because the disparities between neighborhoods (both in crime and poverty) can be dramatic.

This is consistent with increasing evidence that the economic barriers in American society are almost impenetrable. If this article has an agenda beyond broadening the evidence base of public discourse, it’s impossible to discern what it might be — it simply cites the available data in an easy to understand form (kudos for the use of interactive embedded charts with source code). 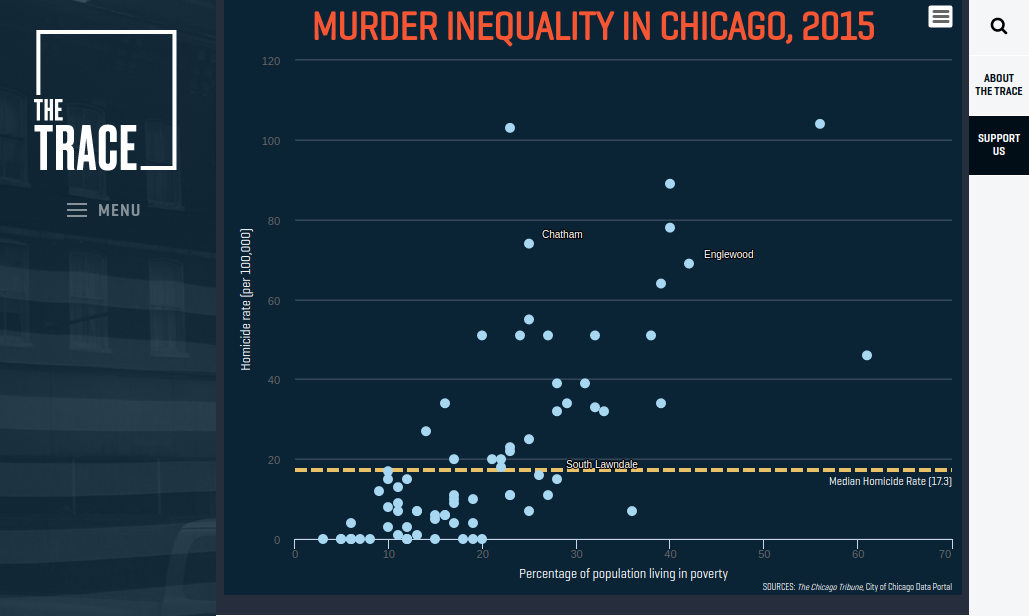 The article on “murder inequality” includes an elegant, interactive visualization that makes the large disparities between Chicago neighborhoods apparent.

“The Reasonable Killing of an 89-Pound Boy” is an in-depth look at the case of Martinez Smith-Payne, a 13-year-old kid from St. Louis, MO shot dead for rummaging through someone’s car looking for change. The article places the killing in the context of Missouri’s “Stand Your Ground” laws. These laws offer legal protection for the use of deadly force in defending one’s life or property, with hotly debated consequences on crime rates.

The article is a solid piece of journalism which largely refrains from value judgments (other than the implicit value judgment that “killing children for stealing change is bad”). Together with more data-centered articles, it contributes usefully to the discussion about “Stand your Ground” laws by way of a particularly horrifying case study.

This article from the category “Gun Lobby” tackles Donald J. Trump’s anti-immigration rhetoric and actions, and the NRA’s record of siding with far right anti-immigrant positions.

Though not labeled commentary, the article is much more explicit in its value judgments. It explicitly accuses NRA executive Wayne LaPierre of “inflaming fears” and uses phrases such as “So much to be afraid out of there. If only there were a wall!”

While I strongly agree with its sentiments, it would be fair to describe it as advocacy journalism grounded in liberal values.

The Trace is powered by WordPress. It uses a slick theme that’s easy on the eyes and straightforward to navigate. The design shop behind the site, Upstatement, published a “making of” that gives some insights into the process.

As one would expect from a WordPress site, it works well on mobile devices and without JavaScript. Content is categorized into areas such as “Gun Policy”, “Data”, “Politics”; commentary is in its own category.

Note that the main site’s RSS/Atom feed is not advertised and can be found here: https://www.thetrace.org/feed/

The journalists at The Trace do an admirable job providing news and data to anyone concerned about the problem of gun violence, whether because they’re personally affected, or otherwise moved to care and do something about it. I recommend following the site if you fall into either category, and it is part of our Twitter list of quality nonprofit media.

Responsible gun owners who support more consistent gun control and safety measures should find the site generally to be fair in its coverage, but may take umbrage at the occasional slip into value judgments they disagree with.

There are two minor criticisms. First, The Trace would benefit from the standard bits of nonprofit transparency: continuous reporting about organizational impact, more financial details, and so on.

Second, the site seems to not be quite clear yet who its target audience is — some articles lack a clear “through line”, others stray a bit into commentary or advocacy without being labeled as such. Explicitly adopting a journalistic code of ethics (example: ProPublica) could help to establish a more consistent standard for readers and writers alike.

The intelligence and passion of the site’s editorial team are evident, and there’s every reason to believe it will play an increasingly important role informing the debate about guns and violence. 4 out of 5 stars.