An emotionally demanding story that rewards those who stick with it

Life is Strange (reviews) established the team at Dontnod Entertainment as talented storytellers and worldbuilders. The game was a joy to explore and offered meaningful player choices that elevated it above the status of mere “walking simulator”. The story it told had a definitive ending; what, then, could a sequel have to offer?

While Life is Strange 2 occupies the same universe and is structured in a similar episodic format, it tells a completely new story, setting the series up as an anthology—think Fargo or True Detective, not Stranger Things.

The second season is about a 16-year-old kid named Sean Diaz and his little brother Daniel. After a traumatic incident, Sean and Daniel find themselves running away from home and wanted by the police.

As the player, you control Sean’s actions and define the kind of relationship you will have with your brother, and with the world you both inhabit. Will you and Daniel steal food to survive, or beg for scraps? Will you attack those who wrong you, or forgive them? Will you trust in the kindness of family and strangers, or face the odds on your own?

The story takes place in America under Donald Trump, but the writers make a point to include moments of love and tenderness alongside the darkness of racism and prejudice that Trump represents. 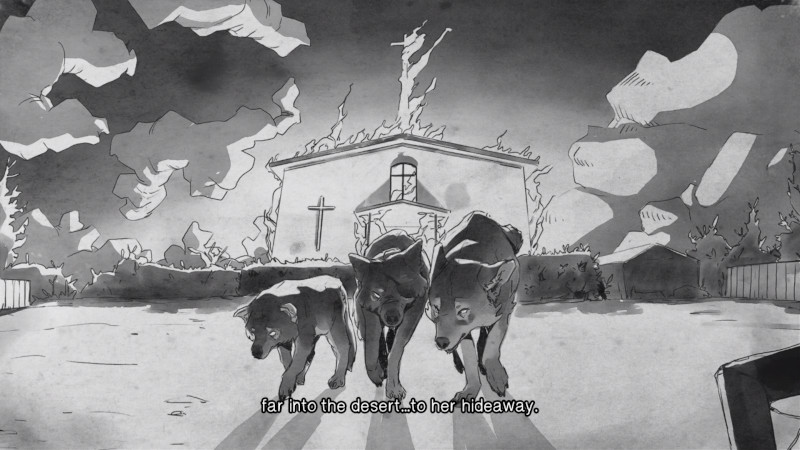 A story told by Sean to his little brother sums up the events so far at the beginning of each episode. In the story, Sean and Daniel are “wolf brothers”. (Credit: Dontnod Entertainment. Fair use.)

Life is Strange 2 improves on the first game’s graphics, which is especially noticeable during the sequences where you explore natural environments like the forests of Washington and Oregon, or a canyon in Arizona. Like the first season, the game is fully voice-acted. Unfortunately, I felt that Gonzalo Martin (Sean Diaz) often overacted his part, which is significant because he’s the main voice you’ll be hearing throughout the game.

Besides making choices and occasionally solving small inventory-based puzzles, you also get to collect souvenirs on the road, which you can inspect in your backpack later. Moreover, Sean Diaz is an aspiring artist, and at various moments you can sit down and draw in your sketchbook. You don’t directly control the pen, but you can choose between different ways Sean sees the world: Is a room you’re trapped in a prison, or can you already see a stairway to freedom? 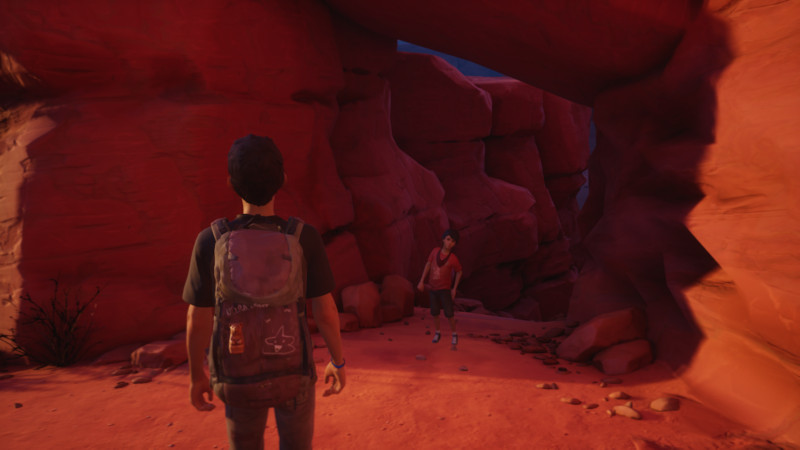 In the last episode, you and Daniel briefly explore a canyon in Arizona, showcasing the game’s significantly improved graphics. (Credit: Dontnod Entertainment. Fair use.)

The first Life is Strange ultimately presented the player with a choice between two very different endings. Life is Strange 2 builds towards a similar choice, but the endings depend not just on that one decision, but on the cumulative effect of your actions so far. For my playthrough, this worked really well. I felt that the ending corresponded beautifully to how I had chosen to act as Sean. That’s a rare feat for a game.

I enjoyed the game, and recommend it. Like the first title, it depends heavily on the chemistry between two characters—in this case, Sean and Daniel. I did not find those characters quite as compelling as Max and Chloe in the first game, partially due to the voice acting, and partially because playing out an at times strained relationship between two siblings is just more emotionally exhausting.

I would rate the game 4.5 stars, rounded up because the team at Dontnod clearly poured their hearts and souls into this game. If you’re looking for mindless escapism completely detached from reality, this is not the game to pick, but if you invest yourself in its story and characters, the game rewards you with a narrative arc that truly feels like you’ve made it your own.