Too short but still sweet visit to another world

As if Aidan didn’t already have his hands full! Now his father has gone missing. The single, unemployed dad of a highly energetic little daughter is barely out of bed when he begins to discover the first clues in his father’s workshop as to what may have happened.

What on Earth is “Clonfira”, and what do the strange patterns on the wall mean? Suffice it to say that Aidan’s father has discovered a way to visit another world, and Aidan and his daughter will soon follow in his footsteps.

The Little Acre by Irish indie developer Pewter Games is a point-and-click adventure. The game’s credentials are boosted by Executive Producer Charles Cecil, a grandmaster of the genre (Lure of the Temptress, Broken Sword).

You play as Aidan and as his daughter Lily. The controls are as simple as it gets: you click on hotspots and sometimes combine items in your inventory with what’s currently on the screen. Many puzzles are contained within a single scene, keeping typical point-and-click frustrations (backtracking, a large inventory) to a minimum.

Most puzzles make sense at least in retrospect, even if you sometimes have to behave nonsensically to progress (scare a cat → cat smashes flower pot → smashed flower pot reveals hidden item you need). Built-in hints may help if you do get stuck. 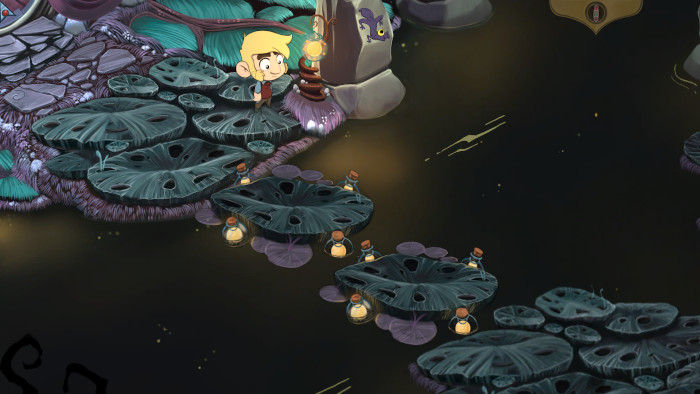 Once Aidan enters the alternative dimension where his father may have gone missing, he transforms into a chibi (small and cute) version of himself. (Credit: Pewter Game Studios. Fair use.)

The game’s worlds are brought to life in excellent art and animation. Whenever you solve a puzzle, you’re likely to see a fully animated little scene. Even when you’re not doing anything, much of the game is visually captivating, and the world feels alive. Some cut scenes are almost of cinematic quality.

The game’s music is catchy and enjoyable, albeit a bit repetitive. The Little Acre is fully voice-acted as well. For some reason, the two main characters narrate their actions in the past tense, which doesn’t always make sense. There are no dialog trees and few interactions between characters.

It’s all over very quickly: a full playthrough is likely to take you between 1-2 hours. Some adventure games manage to deliver a powerful experience in a short playtime (think Loom or the more recent What Remains of Edith Finch). The Little Acre unfortunately feels very rushed.

Scenes that should have emotional power aren’t given the room they need. The villain’s motivations are insufficiently explained. A new character is introduced but given very little to do. Switches between Aidan and Lily happen too quickly. The ending is abrupt and delivers limited emotional payoff.

At the same time, the game’s amusing animations, cutely drawn characters, and relative simplicity make it a good family activity, if you don’t mind that it also deals with grief and loss. Kids may be more ready to forgive the game’s weaknesses, and to fill in the blanks with their own imagination.

Overall I would give The Little Acre 3.5 stars, rounded up because Dougal the dog is a very good boy. It’s often on sale for $5 or less, and that’s a good price to pay for it.

The game has a native Linux version. It crashed for me a couple of times, but auto-saved at the beginning of each scene, so I did not lose any progress.