Review: Your Future Self

Your Future Self
contortionist-games.itch.io/your-future-self
More reviews and information

A good loop to get stuck in

Your Future Self is an interactive story developed by Contortionist Games, which as of this writing is one developer, Andrew Hirst, based in Sheffield, UK. The game presents itself in a CRT aesthetic with many flicker effects, similar to Pony Island.

The premise is that you’re stuck in a time looping bubble with your future self and have to convince them not to commit an act that will kill thousands of people, but which your future self clearly considered justifiable. Every dialog choice can succeed or fail. If you ultimately don’t succeed, the loop starts again.

As you pick from different strategies to engage with “yourself”, the story unfolds. You can’t pick the exact words you want to say to yourself—your choices are always to be rational, empathetic, or assertive, and the game decides what that means in a given context.

There’s a light RPG-like mechanic at play here, where your “skill” at being rational, empathetic, or assertive is measured against your future self’s skills and receptivity in those areas. If you turned on “helper mode” on the start screen, the game shows you the likelihood that a given choice will succeed. 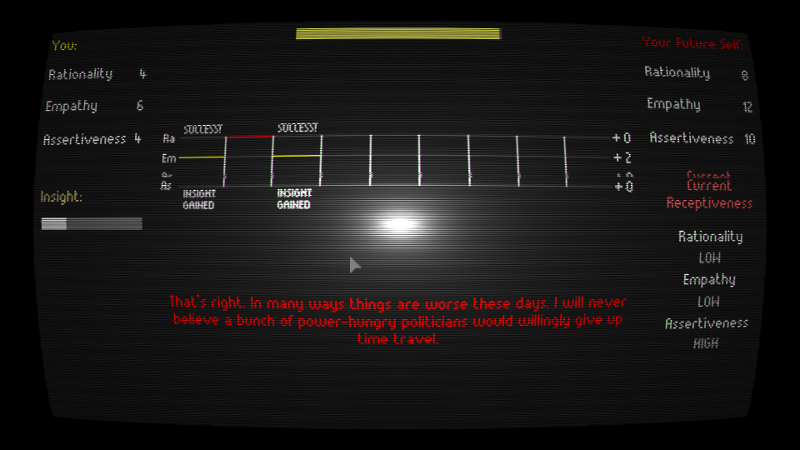 The success or failure of your attempts to persuade your future self is visualized, and is subject to a simple RPG-like mechanic. The CRT scanline effect, curved screen, and center glare are in-game visuals. (Credit: Contortionist Games. Fair use.)

There are, of course, additional layers to the story, and the game employs intense visual effects to keep things interesting. It also has an excellent chiptune soundtrack. Check out Rebels to the Rescue and Your Future Self (Remix).

The time loop mechanic can get a bit tedious if you have to click through the same loop a couple of times to find the right answers—in retrospect I think I would have enjoyed the game more if I had enabled “Helper mode”. The story was interesting enough to keep me engaged until the ending (I think I played for about 1-2 hours).

I’d give it 4 stars—the game mechanics and story aren’t perfect, but the excellent soundtrack and atmosphere make up for most of the game’s weaknesses.