The Bundle for Racial Justice and Equality contains more than 1,600 items—video games, TTRPGs, assets, etc. This group exists to review some of them.

A rom-com on the road

Highway Blossoms is a romantic visual novel about two young women (Amber and Marina) who meet through a chance encounter on the side of the road, and soon embark on an adventure together. It is a 4-6 hour long story told in text, pictures, animations, music, sound and voice. As the player, you don’t get to make any choices—your influence ends on the settings screen.

The story is told in the first person from the perspective of Amber, who is on a road trip in her grandfather’s RV. Her grandfather, who played a central role in Amber’s life, has recently passed away, and the trip is Amber’s way to process the loss. In this healing journey, she is aided by a bucket full of cassette tapes that she and “gramps” used to listen to.

On the side of the road in New Mexico, Amber first spots Marina, whose car appears to have broken down, and offers her assistance. It turns out that Marina is bubbly, cheerful, and entirely unprepared for her first trip away from home.

Soon enough, Marina draws a reluctant Amber into the purpose of her own trip: a treasure hunt across multiple states, based on claims in an old journal ostensibly written by a gold rush era miner. 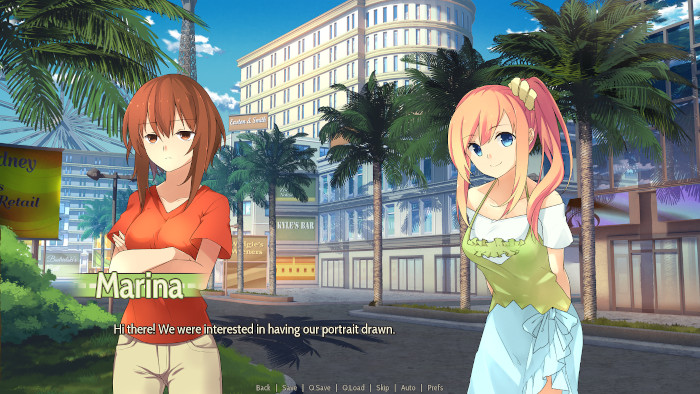 Amber and Marina in Vegas. These are the two sprites (with different facial expressions, poses and gestures) used through most of the game. (Credit: Studio Élan. Fair use.)

Amber and Marina grow closer during their adventure, and their blossoming love is the fluttering heart of the story. They do encounter other characters, chief among them a trio of treasure hunters led by a fierce and obnoxious woman named Mariah.

In many ways, it feels more apt to compare Highway Blossoms with a romantic comedy movie than with a novel. The characterizations are over-the-top (Marina is the ditzy but angelic love interest sometimes found in rom-coms), and the presentation heavily relies on the capable voice acting by Katie Dagnen (Amber) and Jill Harris (Marina).

It’s all very cheesy, but it works, and you quickly forget that you’re not at the wheel at any point during this trip. The story features many notable sites—e.g., Shiprock, Canyon de Chelly, Arches National Park—which may inspire some players to make real world travel plans. The treasure hunt that motivates several of the stops gives parts of the story an unfortunate colonialist undertone.

While I found the graphics and parts of the soundtrack a bit repetitive, and some of the writing a bit cringey, I would overall recommend the experience if you’re in the mood for a wholesome love story. I would give Highway Blossoms 3.5 stars—rounded up because it made me both cry and laugh, as any romantic comedy should. There’s a continuation of the story called “Next Exit”, which I look forward to playing in future.

Posted under: Bundle for Racial Justice and Equality
Written by Eloquence on 6/12/2021, 5:15:54 AM
Permanent link
Older reviews

This team has not written any blog posts yet.