How greed and fanaticism destroyed a world

Before Columbus, the Americas were home to tens of millions of people, possibly more than 100 million in total, a population greater than that of Europe at the time. The genocide that followed in the subsequent centuries—a combination of systematic extermination and diseases imported from Europe’s pestilence-ridden cities—is greater than any other known in history.

American Holocaust by David Stannard, Professor of American Studies at the University of Hawaii, was published in 1992—the quincentennial of Columbus’ first voyage. It remains one of the most authoritative works about how and why this genocide occurred. 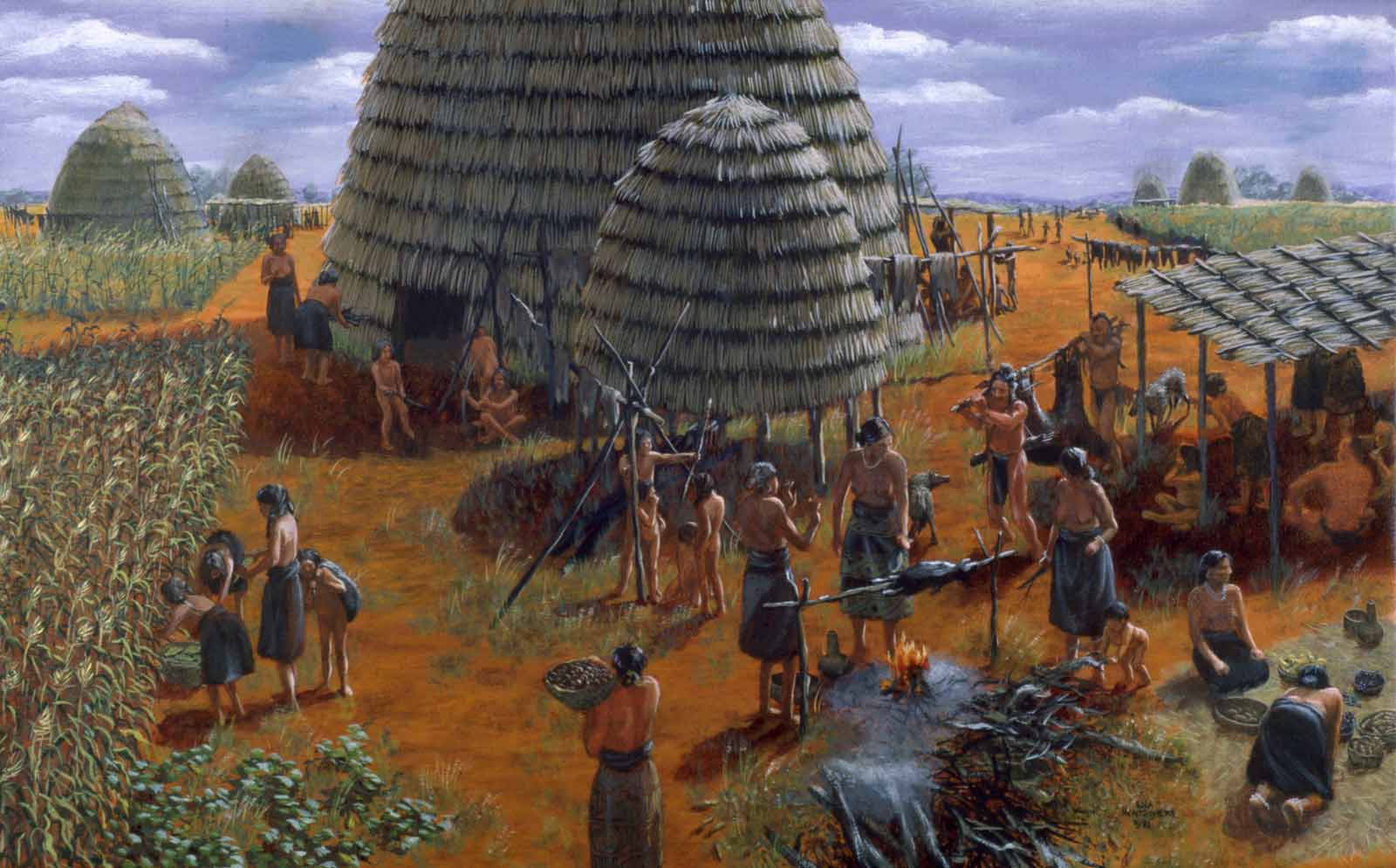 Before describing the consequences of European contact, Stannard gives us a window into what pre-Columbian societies in the Americas looked like, describing communities like the Inca, Aztecs and Maya, the Mississippian culture, and the Ancestral Puebloans.

The history of human settlements in the Americas begins at least about 13,500 years ago—and possibly as long as 40,000 years ago. During this time, the uncounted, diverse communities who lived on these vast lands developed vibrant villages and cities, sophisticated farming and irrigation techniques, and large trade networks. They built monuments, watched the stars, created geoglyphs, waged wars, made peace.

But when the threads of American history finally crossed with those of Europe, a new chapter began—and this one was to be written in the blood of multitudes.

Stannard paints a vivid picture of Spain at the time of Columbus’ first voyage. This was the time of the Spanish Inquisition, of the expulsion of the Jews from Spain, of the conquest of Granada; for many, it was a time of abject poverty and disease which routinely swept through Europe (in the previous century, the Black Death had killed 75 to 200 million people in Eurasia). It was a time of prophecy, of witch-hunts, and fanaticism; Columbus himself would write a Book of Prophecies towards the end of his life.

Above all else, the Spanish sought gold to fund their wars and their fledgling empire, with the “conversion” of natives along the way being at best a secondary motive in practice. When they arrived in “Hispaniola”, they brought with them diseases that Europe’s population had become hardened to, and set to work to enslave the native population to work the mines and fields. Those who weren’t killed by disease and by the terror that the Spanish unleashed on the population, were worked to death—and before long, the natives were replaced by imported African slaves.

Market scene of Tenochtitlan before Spanish conquest by Diego Rivera (d. 1957). Note the human body part being sold on the market, which is suggestive of Aztec cannibalism, the extent of which remains heavily disputed among historians. (Credit: Diego Rivera. Fair use.)

That story would come to be repeated by the Spanish invasions throughout South America. Whether natives were friendly or hostile made no difference: the invaders sought gold, not souls, and were willing to work the population to death to get it. The biggest concern this raised in the motherland was that the conquistadors were running out of slave labor.

There were, of course, some Spaniards who were horrified by this unfolding tragedy. Most notably, Bartolomé de las Casas advocated throughout his life for the welfare of the indigenous people, but he could not halt the genocide, only chronicle it.

In contrast with the Spanish quest for gold, Stannard describes the motives regarding the colonization of North America primarily in terms of expansion, to which the native populations were an impediment. In this settler-colonialism, the expulsion or destruction of native populations was a prerequisite for the success of the new colonies, once again aided by European diseases.

Stannard provides more evidence for this characterization than can be included in a brief review, but as it pertains to modern America, it is worth quoting the section that describes the role of the “founding fathers” of the United States in advocating for and implementing genocide (p. 119-120):

George Washington, in 1779, instructed Major General John Sullivan to attack the Iroquois and “lay waste all the settlements around … that the coun­try may not be merely overrun but destroyed,” urging the general not to "listen to any overture of peace before the total ruin of their settlements is effected. " Sullivan did as instructed, he reported back, “destroy[ing] every­thing that contributes to their support” and turning “the whole of that beautiful region,” wrote one early account, “from the character of a gar­den to a scene of drear and sickening desolation.” The Indians, this writer said, “were hunted like wild beasts” in a “war of extermination,” some­thing Washington approved of since, as he was to say in 1783, the Indians, after all, were little different from wolves, “both being beasts of prey, tho’ they differ in shape.”

And since the Indians were mere beasts, it followed that there was no cause for moral outrage when it was learned that, among other atrocities the victorious troops had amused themselves by skinning the bodies of some Indians “from the hips downward, to make boot tops or leggings.” For their part, the surviving Indians later referred to Washington by the nickname “Town Destroyer,” for it was under his direct orders that at least 28 out of 30 Seneca towns from Lake Erie to the Mohawk River had been totally obliterated in a period of less than five years, as had all the towns and villages of the Mohawk, the Onondaga, and the Cayuga.

Or Jefferson, for example, who in 1807 instructed his Secretary of War that any Indians who resisted American expansion into their lands must be met with “the hatchet.” “And … if ever we are constrained to lift the hatchet against any tribe,” he wrote, “we will never lay it down till that tribe is exterminated, or is driven beyond the Mississippi,” contin­uing: “In war, they will kill some of us; we shall destroy all of them.”

These were not offhand remarks, for five years later, in 1812, Jefferson again concluded that white Americans were “obliged” to drive the “back­ward” Indians “with the beasts of the forests into the Stony Mountains”; and one year later still, he added that the American government had no other choice before it than “to pursue [the Indians] to extermination, or drive them to new seats beyond our reach.” Indeed, Jefferson’s writings on Indians are filled with the straightforward assertion that the natives are to be given a simple choice-to be “extirpate[d] from the earth” or to remove themselves out of the Americans’ way.

This policy of genocide was continued by future presidents—notably Andrew Jackson, whose “Indian Removal Act” was exactly what it sounds like (a policy of murderous ethnic cleansing). About Jackson’s ascend to the presidency, Stannard writes (p. 121-122):

Such explicitly genocidal language was used into the 20th century, including by Theodore Roosevelt, who once remarked: “I don’t go so far as to think that the only good Indians are dead Indians, but I believe nine out of ten are, and I shouldn’t like to inquire too closely into the case of the tenth.” 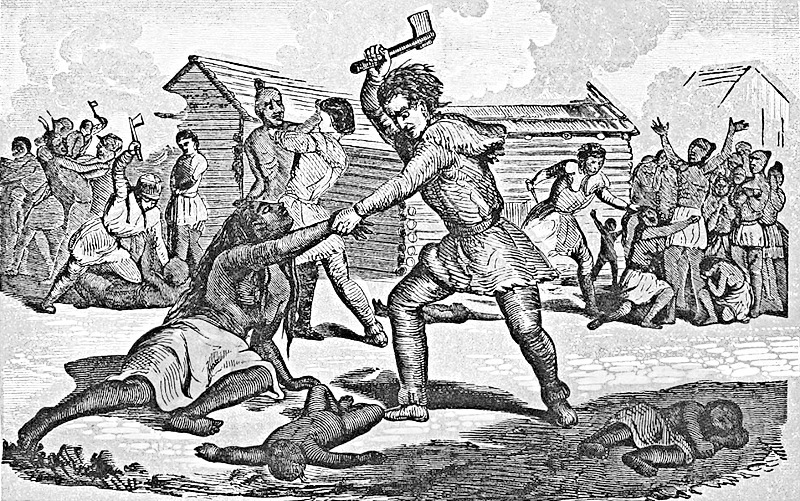 It is rare that the colonists recognized their own actions as “massacres”, but the 1782 mass murder of 96 peaceful Christianized natives in Ohio (in the majority women and children) is an exception; it was embarrassing in a context where usually a pretext was sought for expulsion or mass murder. The event is known as the Gnadenhutten Massacre. Illustration from Henry Howe, The Great West (1852).

Today’s occupant of the White House is a noted admirer of Andrew Jackson; he placed Jackson’s portrait in the Oval Office (where it hung during a ceremony honoring Navajo code talkers) and cited him as a role model on many occasions.

Stannard links the policies of genocide in the Americas to the fanatical religious ideology that the Spanish and the English brought with them: an ideology that often venerated suffering, that was obsessed with sex, that carried within it ideas of “monstrous races” in need of either salvation or destruction.

He connects these ideas to their precursors in antiquity (especially the dehumanization that accompanied the institution of slavery), while noting how the rise of Christianity hardened them into fanaticism, a subject on which Catherine Nixey elaborates in her 2018 work, The Darkening Age.

These beliefs made it all too easy to regard the natives as “savages” and “beasts”, less than human, beyond reason. The fact that many of the societies of the Americas had more permissive attitudes towards sexuality, very different concepts of property, and a large number of beliefs that were totally alien to the invaders—all this removed them further from the prevailing concept of what it means to be human.

Even the Spanish missions, institutions supposedly meant to bring Christianity and “civilization” to the natives were, in reality, little more than concentration camps where natives were worked to death, if not killed by disease (facilitated by the tiny amount of living space allocated to each inhabitant). Stannard cites the example of the missions of California, a topic on which author Elias Castillo recently elaborated in the book A Cross of Thorns: The Enslavement of California’s Indians by the Spanish Missions.

Of course, to this day, there are plenty of people that will dispute the facts recounted by Stannard, or look for ways to equivocate: Surely disease was by far the more deadly force, so this was not genocide! Surely some natives attacked settlers, so the goal was not extermination but self-defense! Surely the claims against the Spanish were exaggerated by other European powers! Surely there were times of peaceful coexistence, so genocide cannot have been the political intent!

None of these defenses withstand even the slightest scrutiny; Stannard anticipates most of them, and cites sources that largely speak for (or against) themselves. Where he makes assumptions that some will criticize (e.g., in arguing for larger population numbers than some scholars accept), he cites credible research and “shows his work”, letting the reader draw their own conclusions. My only significant criticism of the book is that the photographs and illustrations in the paperback edition are of extremely poor reproduction quality—you may have more luck with the hardcover version.

American Holocaust, then, is an essential work to truly understand the origin story of modern “civilization”. For if we are to create a society that is in fact worth being called a civilization, we must be willing to reflect upon the beliefs and values that made the genocide in the Americas possible.

Remnants of these beliefs—including the expansionist, extractive ideology of settler-colonialism—still animate human action as we face the twin challenges of the 21st century: avoiding catastrophic climate change and avoiding nuclear war. To name just two examples, conflicts like the protests by Native-Americans against the Dakota Access Pipeline, or settler violence against Miskito indigenous people in Nicaragua, show that this past isn’t dead—it’s not even past.