Of all the publications we’ve reviewed so far, Science News has by far the largest social media reach. With 2.27M followers on Twitter and 2.7M “likes” on Facebook, it easily outperforms many for-profit science outlets like LiveScience or SPACE.com, and is on par with Scientific American.

Granted, it’s had a bit of a head start. Science News has been in print since 1922 by the Society for Science and the Public. As the name suggests, Science News focused on giving updates on the latest scientific discoveries, but that includes some in-depth feature stories, as well. A print edition is issued every two weeks.

The online version includes a steady stream of mostly brief science updates alongside a set of staff blogs which effectively function as an analysis/opinion section.

Blog posts are available indefinitely, while articles become paywalled after a year (as of this writing, a digital-only Society membership that grants full archival access costs $25/year). You can also preview the print magazine before joining, a nice touch that I’d like to see other print publications adopt.

The organization also publishes Science News for Students, which targets “teens and tweens” and includes helpful glossaries in each article. Unlike the main site, its articles never get paywalled.

Per the latest available tax return, Science News had $18.6M in revenue in 2015. $6.5M of its expenses were allocated to Science News itself. In addition, the Society runs some of the largest science outreach projects in the country, each sponsored by a different corporation: the Intel Science and Engineering Fair, the Regeneron Science Talent Search and the Broadcom MASTERS science competition. Together, it spent $12.8M on these and other outreach programs.

CEO and President Maya Ajmera received $323K in total compensation including benefits in 2015. While a bit high by nonprofit standards, it’s well below the outliers we’ve reviewed (which are also smaller organizations). Ajmera brings impressive nonprofit credentials to the job: as a 25-year-old, she founded the Global Fund for Children, which has since grown into a large international grant-making organization. Editor-in-chief Eva Emerson received $200K in total compensation.

Unusually, the program areas such as the competitions generated 74% of the organization’s revenue in 2015 per the Annual Report, and the magazine only generated 23%. The report notes: “Print circulation declined 4.5 percent, to end the year with 84,548 paid subscribers. Despite the growth in digital readers, the magazine operates at a loss.”

The Society describes itself as being “focused on promoting the understanding and appreciation of science and the vital role it plays in human advancement: to inform, educate, and inspire.” Science in this context means primarily STEM – (natural) science, technology, engineering, and mathematics.

Its articles are typically written in a lighthearted tone, e.g.: “Dengue fever spreads in a neighborly way. Dengue is a bit of a homebody.” Some scientists may occasionally bristle at the publication’s liberal use of similes, but I did not encounter clickbait or sensationalism, nor did I find evidence of major inaccuracies.

The articles are typically short and illustrated, making the key conclusions easy to grasp. Cited papers are referenced directly, which isn’t necessarily a given in science reporting – other publications often reference an institution’s own press release, making it necessary to dig for the actual paper.

Science News generally stays away from political controversy and “science vs. pseudoscience” arguments. For example, a Google search for homeopathy yields no relevant article results (an internal search turns up the paywalled article “Dilutions or Delusion?” from all the way back in 1988). Homeopathy is obvious pseudoscience, so its exclusion is reasonable – but if you’re looking for arguments why something is or isn’t considered science, you might not find them here.

The publication did weigh in on the 2016 election with its own report: “See where Clinton and Trump stand on science”. It’s a neutral summary based on public statements and the responses to 20 questions posed by ScienceDebate.org, an independent effort the Society supports. In contrast to Scientific American (candidate assessments), Science News made no attempt to grade the candidates’ answers. Some might find its approach here a bit anemic and suffering from false balance, especially when considering the planetary stakes on issues like climate change. 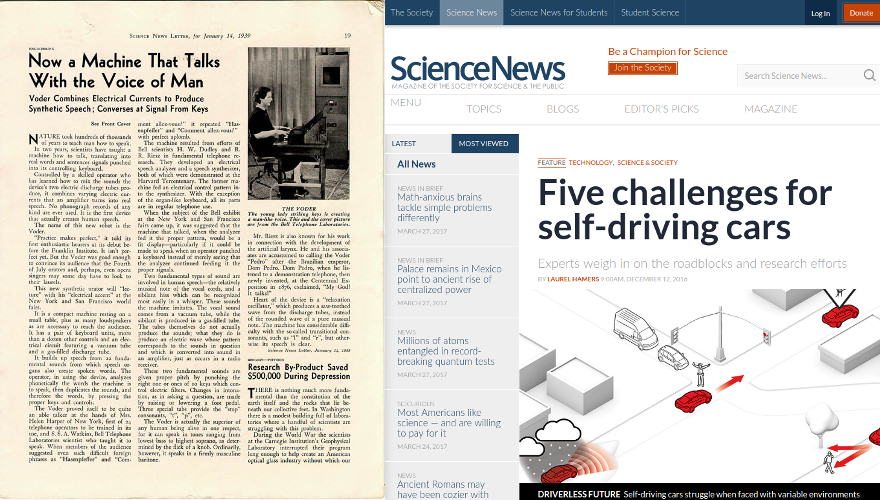 The site’s design is straightforward, with a left-hand column showing the latest headlines, and a right-hand area featuring story summaries. There’s little clutter to distract from the content, and you can safely turn off your ad-blocker if you don’t mind an occasional splash screen. There are small “sponsor messages”, but they are largely self-referential, e.g., an ad for the Science News app.

The color scheme is a bit too low-contrast; some of the grey-on-grey text is difficult to read even without vision problems. The site works fine without JavaScript and on mobile devices.

Each story features a Disqus-powered comments section, and the Science News staff does moderate comments that violate its policies. In spite of that, the signal-to-noise ratio of comments isn’t very high, but you’ll occasionally find very knowledgeable commenters.

Predictably, content is under conventional copyright, though Science News makes heavy use of photos and illustrations from free/open repositories such as Wikimedia Commons.

Science News is a fine source of daily updates on STEM topics, and the Society’s many outreach efforts are laudable and important. Its coverage avoids controversy, meaning that you may need to look elsewhere for background science on highly politicized topics like abortion, or for debunking pseudoscience.

Like many traditional publications with origins in print and declining print subscriber numbers, it’s clearly still trying to figure out its place in the new media landscape, but the large amount of quality content it produces combined with its reputation and strong branding have already given it a highly impactful online presence.

Organizationally, the Society shows all the signs of a well-run traditional nonprofit, and its Annual Reports give a good overview of its activities.

With all that said, it’s a bit sad to see so much quality content disappear into restricted archives (and it makes linking a bit pointless in the long run, unless you want to go digging on archive.org). It would be good to see the organization experiment with models that enable it to keep more of its articles freely available. For content that’s permanently unrestricted (such as the Science News for Students website), releasing it under a free license seems to have no obvious downside.

The final rating is 4 out of 5 stars – Science News offers good summaries, but for depth and breadth, you may want to complement it with other science-focused sources.