Reviews by Team: Edu by Video

Have a few minutes to learn something? We've got you covered!

Demanding but solid science overviews by a high school teacher

Bozeman Science is one of those YouTube channels you probably have never heard of that’s managed to become very, very popular. As of this writing, it boasts more than 500,000 subscribers, and its most popular videos (e.g., “A Tour of the Cell”). have been viewed millions of times. It is run by Paul Andersen, a high school teacher and education consultant from Bozeman, Montana (a small US city known as the location of the first contact between humans and Vulcans, at least if you watch Star Trek).

Many of the videos are on subjects relevant to biology: photosynthesis, cellular respiration, gene regulation, gene editing with CRISPR, and so on. Andersen also explores topics in chemistry, physics, statistics, and – especially recently – education itself. For example, one video introduces the educational practice of modeling instruction, where students are asked to develop their own models to explain how a scientific phenomenon works, which they then reason about with other students and the teacher.

These videos do require focused attention and a willingness to research the occasional bit of jargon. Andersen moves relatively quickly through his content, so although a video might only be 5 minutes long, you might have to watch it 2-3 times and consult some additional materials to “get it”. That’s not really frustrating, since Andersen has the calm and confident voice of a good teacher and is easy to listen to.

The videos use plenty of illustrations, and Andersen takes pains to overlay textual corrections to note errors in the original recording. If you’re going to check out one of his videos, I would make it the introduction to CRISPR gene editing, since it remains a very relevant topic and is also a good example of his teaching style.

Andersen relies on donations to support his work, but he does not appear to have plans to turn it into a larger franchise like Khan Academy. As it is, if you’re into science (or prepping for exams), I recommend subscribing to the channel and checking in from time to time for topics that may interest you.

Posted under: Edu by Video
Written by Eloquence on 1/10/2017, 5:58:14 AM
Permanent link
Amoeba Sisters
www.youtube.com/user/AmoebaSisters/videos
More reviews and information

The Amoeba Sisters take some of the complex central ideas of biology (like cell division) and turn them into googly-eyed cartoon creatures and animated GIFs. The creators are sisters in real life with a deep passion for explaining science that shows through in the attention to detail in their videos.

These videos are great for kids, but if you’re an adult and don’t remember much of your high school biology, you may enjoy them as well. They are pretty short, so this isn’t an in-depth resource by any stretch – but a lovingly created, fun entrypoint for learning.

Posted under: Edu by Video
Written by Eloquence on 9/30/2016, 8:37:29 AM
Permanent link
iBiology
www.youtube.com/user/ibioseminars
More reviews and information

In my view, there’s no subject as challenging and as fascinating as the study of life. None. The machinery of life operates down to the subatomic level (consider proton pumps, or the use of quantum walks in phtosynthesis), at a level still beyond our own technological abilities. In the form of viruses and bacteria, it can kill millions and evolve so rapidly that it eludes our best efforts to defeat it. It’s produced the complexity of the brains that are trying to understand it – and machines as beautiful as this, a bacteriophage that infects bacteria: 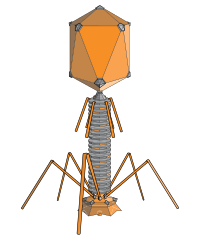 But my favorite part of learning about biology in the year 2016 is how much we already know. Since the discovery of DNA, the development of electron microscopes, the use of computers to study huge datasets and to run artificial simulations of evolution, and countless other breakthroughs, we have a remarkably coherent picture of why life is the way it is. We live in an era where we study ants to optimize the behavior of algorithms! How amazing is that?

The study of life, then, is a little bit like walking into an alien spaceship but discovering that some of the smartest brains on the planet have already tried to figure out everything from the warp drive to the controls. How much there is to learn! But it’s hard to find the best books, videos, websites, and so on.

If you use only one, make it iBiology. It’s a grant-funded project, and the gist is a huge library of video lectures done by leading biologists. And I mean leading – you’ll find Nobel Prize laureates like Jack Szostak explaining what we know about the origin of life on Earth, or CRISPR co-discoverer Jennifer Doudna talking about genome engineering.

The iBiology format is very engaging; the speaker is talking in front of slides/videos that take up the whole background and are composited in, i.e., no shadows or image quality issues (think weather forecast). These are long lectures, ranging from introductions anyone with a basic understanding of high school level biology can follow to very complex stuff. It pays to explore, listen in on a few different ones, and also make notes of topics to dig into further using additional resources like Wikipedia.

There’s no catch – the videos are under a Creative Commons license (though one of the more restrictive ones). I hope they’ll keep getting funded, but the library they’ve already produced is an incredible treasure and I highly recommend checking it out, even if biology isn’t something you’ve spent a lot of time thinking about so far. :-)

Posted under: Edu by Video
Written by Eloquence on 9/19/2016, 5:11:00 AM
Permanent link
Kurzgesagt
www.youtube.com/channel/UCsXVk37bltHxD1rDPwtNM8Q
More reviews and information

“Kurz gesagt” is German for “in a nutshell”, and that’s what these videos are: short animations that explain complex ideas. The team is based in Germany, but the videos are in impeccable English and the quality of the animation is top-notch.

Given that most of these videos are 5-10 minutes long, some complex topics (like addiction, or ISIS) of course aren’t explained with any depth. But the team usually does solid research and provides an up-to-date view of what’s known. Here are just some examples I like:

There’s a lot to explore here, and I recommend subscribing to their channel without any hesitation. By now, they receive nearly $18,000 in funding from nearly 5,000 Patreon donors every month. That gives you an idea how much people love their stuff.

Posted under: Edu by Video
Written by Eloquence on 9/15/2016, 6:55:19 AM
Permanent link
Every Frame a Painting
www.youtube.com/channel/UCjFqcJQXGZ6T6sxyFB-5i6A
More reviews and information

Great videos about the art and craft of filmmaking

If you enjoy movies and are the kind of person who likes to figure out how and why stuff works, you owe it to yourself to check out at least an episode or two of Every Frame a Painting. It’s a channel lovingly maintained by Tony Zhou. Each episode investigates different aspects of filmmaking. A good example without spoilers is the episode about The Art of the Gag which takes a look at Buster Keaton’s visual comedy and compares it to modern comedy.

As of this writing, Zhou’s Patreon funders pay him about $7,000 per episode, and this allows for an attention to detail not often found in web videos of this kind. A lot of background research including conversations with film industry contacts goes into each episode. The explanations are clear and precise, owing to carefully crafted scripts. In short, it’s a well-made show that keeps your attention while giving you explanations that may help you understand why and how a movie makes you feel the way it does.

Tutorials the way they should be done

Mikeycal’s Blender Video Editing Tutorials are an amazing free resource to learn how to use Blender, a free and open source suite mostly used for 3D modeling and animation, to edit videos. Blender is very capable software, but it takes a while to master its idiosyncratic user interface. In his video series, Mikeycal walks you through how to set up your Blender workspace so that it’s basically just a video editor from your perspective, and explains how to cut, combine different audio tracks, manage transitions, etc.

As an absolute beginner in video editing who didn’t want to use closed source software, I found these tutorials invaluable for my Passionate Voices series of interviews. Mikeycal is a natural teacher – he repeats things, enunciates very clearly, shows/highlights the parts of the UI that matter, and so on. He moves at a good speed while referencing earlier lessons as appropriate. There’s really nothing more one could ask for, even from a paid resource – and this one’s completely free.