An engaging tragedy about forbidden friendship set in a fantasy world

The Last Birdling is a visual novel by indie developer Marcus “InvertMouse” Lam released in 2017, two years after Cursed Sight (review). It tells the story of the secretive relationship between two girls, a human named Tayo and a birdling named Bimonia. The birdlings are winged humanoid creatures that once dominated the wild—but after a great war with the humans, Bimonia and her mother may be the last birdlings alive. 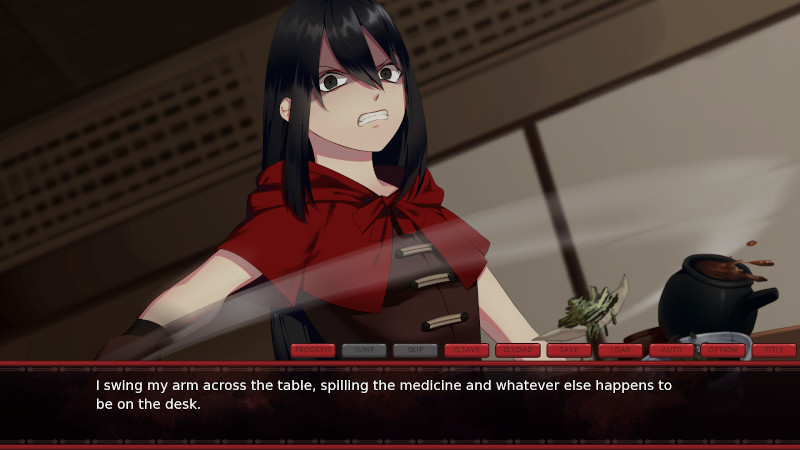 As a young woman, Tayo is drawn further into the conflict between birdlings and humans. (Credit: InvertMouse. Fair use.)

A a child, Tayo befriends Bimonia in the forest near a human settlement. For both girls, their growing friendship is a chance to escape their protective and demanding mothers, and to experience the joy of discovering the world through the eyes of another. But humans still view birdlings as dangerous monsters. If Bimonia is spotted by the townspeople, the result will almost certainly be bloodshed—and Tayo will be branded a traitor for becoming a birdling’s friend.

As the player, your perspective alternates between the two protagonists, and you are prompted to make many small choices. As Tayo, do you swallow a rotten herb offered to you by Bimonia, even though it may make you ill? The effect of these choices is limited until the end, when the nature of the relationship between Tayo and Bimonia leads to one of five endings.

Regardless of your decisions, this is not a cheerful tale. While the game is generally not visually explicit, it includes textual descriptions of violence, death, and sexual assault.

Technologically, The Last Birdling is a solid title that showcases InvertMouse’s growing mastery over the visual novel format. The characters are visually expressive and the game is well-paced, offering beautiful chapter transition screens as the story progresses. As a player, it’s easy to visit the different endings without re-reading old text.

The game attempts a fair bit of worldbuilding, including a glossary that fleshes out concepts touched upon in the story. The quality of the writing is sometimes uneven, but never distractingly so. As in some of InvertMouse’s other stories, the characters do have a tendency towards self-loathing that gets a bit tiresome.

The Last Birdling is a better title than Cursed Sight in almost every respect, but in spite of that, I found it less emotionally impactful. The ambiguous relationship between Bimonia and Tayo pulled me away from the characters to the larger themes of the story. As a result, even the most tragic events packed less of a punch.

Nonetheless, The Last Birdling is a good story. I would recommend it to fans of the visual novel genre, if you’re in the mood for a fantasy tale about forbidden friendship that visits some dark places. At $5 it’s a small price for a labor of love by a storyteller of maturing talent.