A charming, short and silly point and click adventure

I’m a big fan of point and click adventures (think The Secret of Monkey Island), a genre that’s frequently been declared dead but that is in fact thriving thanks to crowdfunded major efforts like Broken Age (reviews) and Thimbleweed Park (reviews), smaller studios like Wadjet Eye, and releases by even smaller teams or solo developers. Clam Man is very much the latter, developed by “Team Clam” which appears to comprise three collaborators.

The game is set in a world dominated by anthropomorphic aquatic creatures. You play Clam Man, an ordinary bloke working as a junior sales representative at Snacky Bay Prime Mayonnaise. After Clam Man gets fired for no apparent reason by his crab boss, he begins to uncover a larger mayo-centered conspiracy. Does it go all the way to the top? Mr. Man will try to find out. 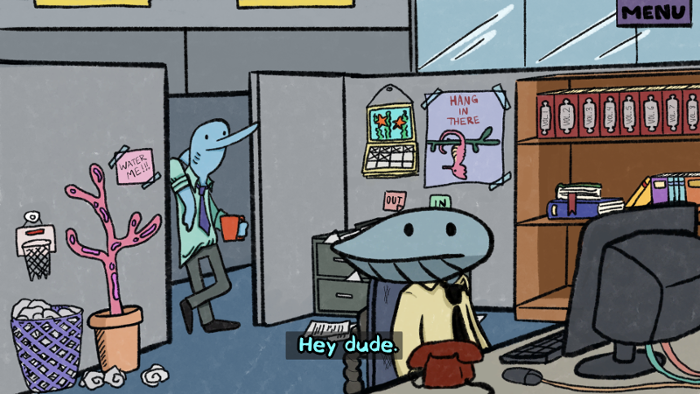 Not all is as it seems at Snacky Bay Prime Mayonnaise. (Credit: Team Clam. Fair use.)

It’s all ridiculous, of course, but some of the jokes are quite funny, and the minimalist hand-drawn art is often very charming. This is only a two hour game, the mouse controls are a bit frustrating, and the writing and artwork don’t quite hold up throughout the short playtime, so the current asking price of $10 is a bit high.

If you already own the game from The Mother of All Bundles, or if you can get it for $5 or less, you’re unlikely to regret your visit to Snacky Bay. Team Clam is certainly one indie developer to keep an eye on.