While the scientific consensus is clear that human civilization is rapidly changing the climate through uncontrolled greenhouse gas emissions, details matter. Which regions will be hit hardest? Which natural disasters can be attributed to climate change? Do positive effects outweigh negative ones in some regions?

To tell this story accurately requires grappling with the latest scientific findings. Science/environment beat writers must do their best to translate these findings to their audiences. Sometimes the truth gets lost in translation, and important findings may be missed. Moreover, traditional media prefer reporting on the human drama of the moment (crime, politics, etc.), and climate change rarely gets the attention it merits.

Is there a better way? Climate Central combines climate science and climate journalism in a single nonprofit organization. It is less focused on the politics of climate change than, say, InsideClimate News (review), but it does cover policy interventions, as well.

It’s been fully operational since 2009 and is based in Princeton, New Jersey, near the famous university. That’s no coincidence. One of the organization’s biggest seed funders is Princeton alum Eric Schmidt (of Google/Alphabet fame), and several staff and Board members are Princeton-affiliated.

The organization’s latest tax return shows revenue of $9.3M, which places it among the better-funded nonprofit journalism outfits.

Most of this funding comes from foundations, but the organization also lists government agencies such as NASA and the US Department of Energy among its supporters. Funding is not further broken down (by year/gift size), and multiple requests for details through the site’s contact form received no reply.

The organization does not publish Annual Reports, and there is no other page that speaks to impact of specific programs, with one exception: The “What We Do” page features a loose list of links to articles by many international publications which have featured Climate Central’s news and research.

Granting that Climate Central is an unsual organization, the Union of Concerned Scientists (based in Cambridge, MA – not much less expensive than Princeton) may serve as a useful additional benchmark. It is a much bigger organization, with $26.6M revenue in 2013-14 (tax return), yet its Executive Director received “only” $270K in total comp, and its Chief Climate Scientist (who was one of the Lead Writers of an IPCC report) received $186K.

The NOAA version of the chart vs. the Climate Central version. To simplify it, Climate Central removed tick marks, labels for in-between years, and 10-year average bars, and highlighted the most recent years. The most idiosyncratic of these changes is the removal of the year labels; most publications show at least some in-between year markers for time series data (NYT example, Vox example, Bloomberg example).

Beyond its news feed, Climate Central makes efforts to translate its own research into explanatory journalism. Sea Level Rise is one such example project. It is based on peer reviewed research such as the paper “Carbon choices determine US cities committed to futures below sea level”, and translates these findings into interactive visualizations.

An example of these visualizations is the “Seeing Choices” map which displays the sea level rise in cities like New York under different temperature scenarios.

Some news feed stories also feature interactive content, such as “Meltdown: More Rain, Less Snow as the World Warms”. Many of these interactive widgets are embeddable, though they don’t offer the rich set of share/embed/download options a site like Our World in Data does.

I didn’t find a list of all papers published by Climate Central scientists, or an open access policy, though the papers that are referenced do appear to be freely available online.

The main website doesn’t have a mobile version (a pretty major fail in 2017), and it is a bit cluttered with many sections competing for attention (“featured content”, “climate services”, “special sections”, etc.), drowning out the news portion of the site. Perhaps to make up for that, a large story carousel features the latest headlines. 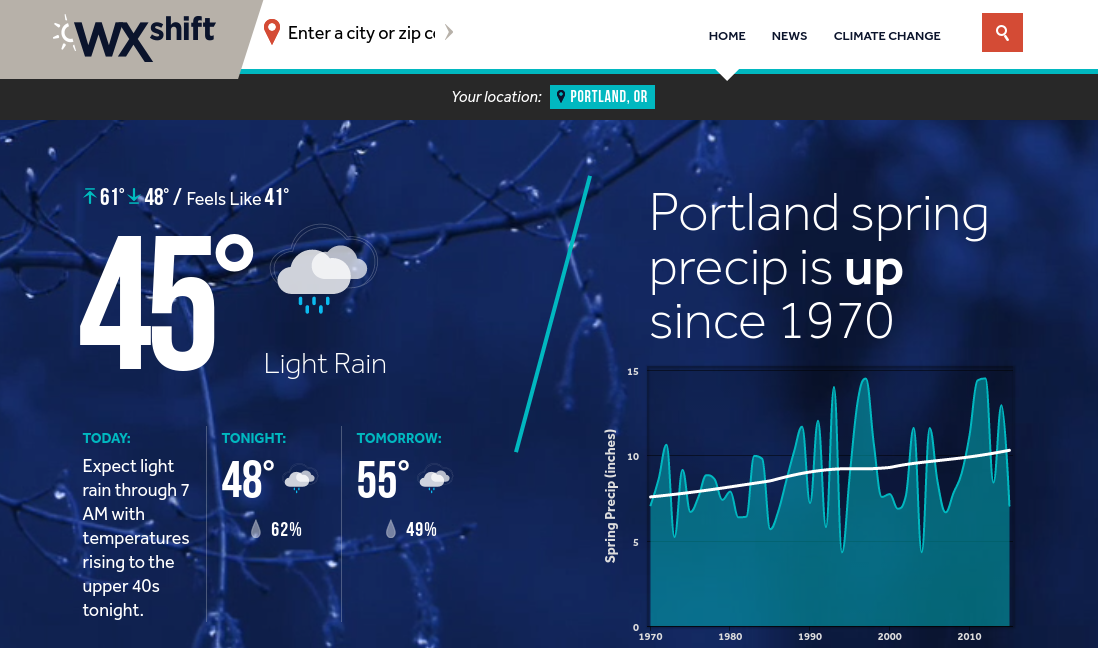 wxshift provides local weather information in combination with longer term climate data and other climate change context. While much more visually appealing than Climate Central, it does not appear to have much of an audience yet.

Climate Central has created much slicker story-centric designs for some of its feature reporting (example). It also operates wxshift, which combines weather reporting with context about how climate change is impacting the weather. Some of the main site’s news content is mirrored to wxshift, as well. Launched in 2015, it appears to have only a very small audience (as of this writing, it has 1,751 Twitter followers and barely registers on traffic ranking tools like Alexa).

Climate Central’s content licensing page is restrictive, requiring case-by-case permission requests rather than using a free license for some or all content. This is fairly typical; even among nonprofits, permissive licensing terms are the exception, not the norm. The organization goes through a lot of trouble to create graphics and maps, which would be entirely appropriate in reference works like Wikipedia, where they could be added to articles read by millions – but the restrictive copyright terms make that kind of re-use impossible.

Climate Central’s journalism+science approach usefully complements more politically focused sites like InsideClimate News. Its journalism is nonpartisan, understandable, and fair, while being based on the scientific consensus. If you care about climate change (and unless you are reading this from another planet than Earth, you should), it’s a source worth adding to your social media or RSS reader.

The main site could use an upgrade. While it’s certainly non-trivial to upgrade older sites, there are many open source projects specifically targeting nonprofit journalism, such as the Institute for Nonprofit News’ widely used Largo Wordpress theme and the Ghost publishing platform.

The organization would also benefit from greater transparency. Being open and accountable about how impact is measured and under what conditions projects are shut down can help donors appreciate that their support is put to good use, and that projects aren’t just left to spin even if they aren’t producing a lot of bang for the buck.

The rating is 4 out of 5 stars, with high marks for the overall quality of Climate Central’s journalism. 1 point off for lack of organizational transparency, for executive compensation well above other science and journalism nonprofits, and for a site design that is not consistently mobile-friendly.