A raw group blog for the antiwar left

If you’ve been online since the late 90s, you probably have known about CounterPunch for a while. After 9/11, it became one of the primary sources for non-mainstream information about US foreign policy, while usually staying clear of the most absurd conspiracy theories.

The project was started as a print newsletter by Ken Silverstein in December 1993 (1993-2011 archives). A one-year subscription to 6 issues of the 36-page newsletter currently clocks in at $50 for US residents. Website content is unrestricted and ad-free.

I would situate the politics of CounterPunch on the antiwar far left (think Ralph Nader/Jill Stein), with some curious contradictions. For example, co-founding editor Alexander Cockburn (deceased in 2012) did not believe in climate change and opposed gun control.

The nonprofit organization behind the site (incorporated as the “Institute for the Advancement of Journalistic Clarity” in California) is as small as you might expect; it reported revenue of $427K in 2015, and did not report any employee compensation, suggesting a shoestring operation.

Unsurprisingly for a tiny org, there’s not much in the way of organizational transparency on the CounterPunch website: no reports, no financial statements, no link to the tax returns.

CounterPunch primarily publishes analysis and opinion rather than original news reporting. Its writers include journalists and authors, activists and academics. It publishes a lot of material – the current “weekend edition” contains 45 articles, some exclusively published on CounterPunch, others cross-posted elsewhere.

The site doesn’t make much of an effort to organize this flood of information. The latest headlines are listed in the sidebar, and excerpts from selected articles in the middle column. The reader has to navigate opaque headlines like “We Aren’t Even Trying”, often without any additional context other than the author’s name.

Editing is hit-or-miss, and citations are few and far between. The website is more of a group blog than a journalistic enterprise, and to get value out of it, readers need to become familiar with the authors whose judgment they trust.

The site covers international politics with special focus on US domestic and foreign policy. There’s no meaningful distinction between types of content (e.g., news vs. opinion), and it’s not unusual for posts to adopt disparaging monikers like “Killary” (for Hillary Clinton), or to ascribe malevolence to political actors. Example:

“And certainly Sanders’s Iraq vote suggests he is not as reckless or bloodthirsty as Killary, but that is setting the bar somewhere beneath the belly of a viper.”

The tone is set at the top – editor Jeffrey St. Clair, too, uses monikers like “MSDNC” (for MSNBC) or “Hillaroids” (for Hillary Clinton supporters).

The underlying perspective shared by many CounterPunch writers is that the leading political forces in the US are equally bad. Individuals like Julian Assange who express viewpoints opposing the US are uncritically celebrated. Here are a few headlines about Assange (who has also published on the site):

This hyperpartisan cheerleadership facilitates the spread of misinformation. For example, CounterPunch also published “Droning Assange: the Clinton Formula”, which was based on a story by True Pundit, a fake news site in the narrowest sense of the term (the made-up claim was uncritically repeated by site editor Jeffrey St. Clair).

It also ignores the many criticisms that have been raised about Wikileaks, which turned itself into a propaganda machine for the alt-right in the 2016 election cycle, up to and including proliferation of complete nonsense such as the infamous “Spirit Cooking” tweet.

Generally, CounterPunch publishes material consistent with a specific narrative: the US is the world’s dominant superpower, and therefore global issues can usually be traced to American action and inaction; in contrast, claims about misbehavior by countries not aligned with the US should be regarded with extreme skepticism. This view can perhaps be best summed up with this image shared via the site’s Twitter account: 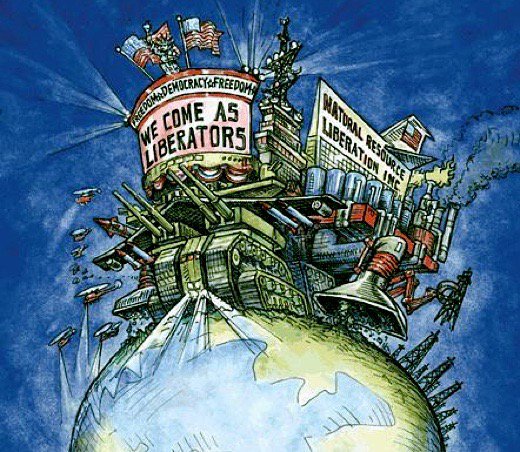 How CounterPunch views the world. Source

Consistent with that idea, CounterPunch is receptive to apologia for dictators the US doesn’t like – it has published numerous stories defending Venezuela’s increasingly brutal and corrupt regime, for example. In extreme cases like the Syria conflict, it has published bizarre pro-Russian propaganda pieces such as William Blum’s oeuvre. In one recent article titled “The United States and the Russian Devil: 1917-2017”, Blum writes:

The same Western media has routinely charged Putin with murdering journalists but doesn’t remind its audience of the American record in this regard. The American military, in the course of its wars in recent decades, has been responsible for the deliberate deaths of many journalists. In Iraq, for example, there’s the Wikileaks 2007 video, exposed by Chelsea Manning, of the cold-blooded murder of two Reuters journalists; the 2003 US air-to-surface missile attack on the offices of Al Jazeera in Baghdad that left three journalists dead and four wounded; and the American firing on Baghdad’s Hotel Palestine, a known journalist residence, the same year that killed two foreign news cameramen.

There is in fact no evidence that journalists were specifically targeted (“deliberate deaths”) in the incident exposed by Wikileaks or the firing on the hotel. A much stronger case can be made that the attack on Al Jazeera was deliberate, and indeed US right-wing media agitated in favor of such attacks at the time, labeling Al Jazeera “enemy media”. If intentional, this certainly was an immoral and illegal attack.

A fair comparison would look at Russia’s own record in wartime and in peacetime, including the staggering list of journalists murdered within Russia. But a fair comparison is clearly not what Blum is aiming for.

In an aside, Blum credits Donald Trump for “not [being] politically correct when it came to fighting the Islamic State.” This is the same Trump who campaigned on the promise of murdering terrorists’ families. As for Russia’s own imperialist ambitions? Here’s Blum’s pro-Putin take:

Lastly, after the United States overthrew the Ukrainian government in 2014, Putin was obliged to intervene on behalf of threatened ethnic Russians in Crimea and eastern Ukraine. That, in turn, was transformed by the Western media into a “Russian invasion”.

In this view of the world, actions by actors the US dislikes are almost always defensible when viewed in light of alleged American behavior. That is not to say that the antiwar perspective isn’t useful – of course it is. But many of the writers CounterPunch publishes tend towards dogma, disinformation and rhetoric more than rigorous analysis, which makes the site, at best, a mixed bag.

At its worst, it enables demagogues. For example, CounterPunch routinely publishes Israel Shamir’s writings (including an execrable defense of Pol Pot). On his own website, Shamir has published an essay about Holocaust denier David Irving (emphasis original):

Technically, David Irving was sentenced for so-called “holocaust denial”. But the concept of Jewish holocaust being the only enforced dogma of supposedly secular Europe has little to do with the Second World War and its atrocities.

They say that even their death is not like the death of anybody else. We must deny the concept of Holocaust without doubt and hesitation, even if every story of Holocaust down to the most fantastic invention of Wiesel were absolutely true.

European history went full circle: from rejecting the rule of Church and embracing free thought, to the new Jewish mind-control on a world scale.

There’s not much to say here – no defense of this anti-Semitic rubbish is possible. Yet, CounterPunch has published more than 50 posts by the person who wrote these words.

As noted, the website design overall is minimal and doesn’t aid discovery. Articles are usually just text; image embeds are often low-resolution, and other types of embeds (charts, interactive maps, etc.) are nowhere to be found.

The site works reasonably well on mobile devices. It refers to its Facebook presence for discussions, which is not a bad move – however imperfect, Facebook’s ranking algorithms at least mean that some of the better comments will come out.

If you are looking for sources that help you understand what is going on in the world, I cannot recommend CounterPunch. Reading it may be cathartic if you share the specific views evinced by many of its writers, but the occasional bit of well-researched reporting is drowned out by one-sided commentary and analysis.

The site’s willingness to offer a platform to writers like Shamir suggests either very sloppy oversight or, worse, sympathies for anti-Semitic views. Either way, it makes the site less useful as a source to be cited and shared.

Evidence like the proliferation of the “Drone this Guy” story shows that even obviously made-up nonsense will not be weeded out reliably. Caveat lector applies – if you do rely on CounterPunch material, track down sources and verify that they really say what the author claims.

This is obviously not a criticism of every writer who publishes on CounterPunch. The site has been around for a long time and has attracted many widely respected left-wing and antiwar intellectuals. Project Censored, which does good work highlighting stories underreported in major media, has recommended a few CounterPunch pieces over the years.

However, since the 90s, many much more interesting alternatives have emerged, for example:

2 out of 5 stars, with points off for poor editing, sensationalism, misinformation, and distortion through extreme one-sidedness.