A weekly dose of brain candy

You may never have heard of the Wellcome Trust, but with a £20.9B ($26.7B) endowment, it is one of the largest philanthropies and the largest non-government funder of health research in the world. Established in 1936 after the death of American British pharma magnate Henry Wellcome, it has retooled itself into a modern science funder and promoter of open access to scientific research.

Beyond direct funding for research, Wellcome also supports science communication projects, and Mosaic is an in-house effort launched in 2014 to publish “compelling stories that explore the science of life.”

The model is simple: every week, Mosaic publishes a long-form story or other journalistic work. Some examples:

These articles are written for a general audience. They would be right at home in, say, the New Yorker, but might be a bit too light on details for Scientific American. Illustrations are often artistic rather than technical. There is some podcast and video content as well.

Occasionally, Mosaic experiments with data journalism. A good example is the Global Health Check, which is a nice way to explore how health indicators have changed since the year of one’s birth. 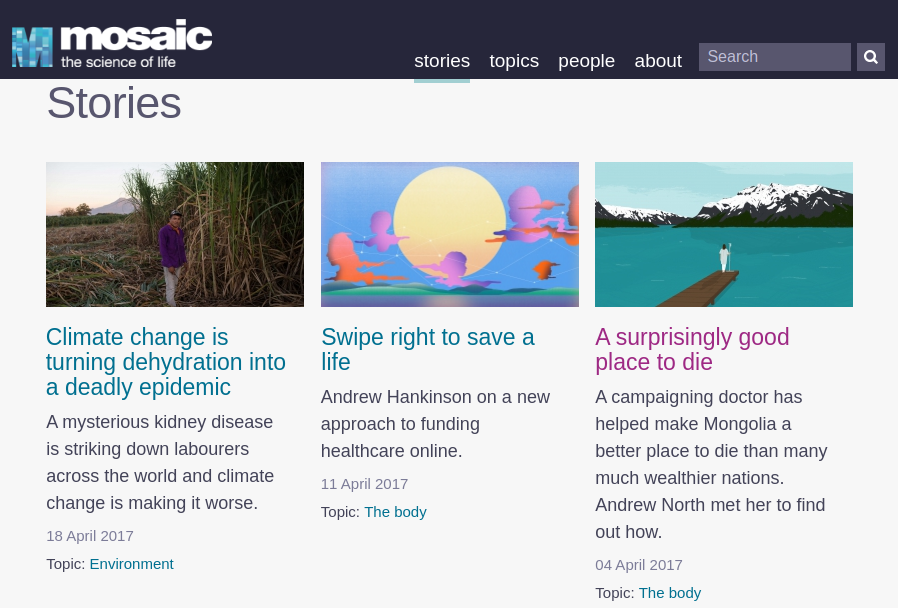 The site design is entirely inoffensive, and some of the illustrations are quite beautiful.

Given the financial position of its parent organization, you won’t find any ads or donate buttons on the site. You also won’t find a lot of information about Mosaic’s organizational internals (though there are mountains of documents about Wellcome itself).

The site design is unremarkable and easy to navigate. It works well on mobile devices and without JavaScript.

Mosaic is described as editorially independent, and its reporting goes beyond projects Wellcome funds. I did find disclosure statements where appropriate. It’s also nice to see that every person involved with a story is credited at the bottom of each story (author, editor, copyeditor, fact checker, art director, illustrator, etc.), a practice I’d encourage other media to emulate.

Consistent with Wellcome’s open access policy, Mosaic content is under the Creative Commons Attribution License, allowing anyone to re-use it for any purpose provided credit is given.

If you’re at all interested in life science, I can’t think of any reason not to follow Mosaic’s work. It’s fairly easy to decide whether the weekly story is something you care about, and if it is, the journalism is generally of very high quality and a pleasure to read.

The focus of Mosaic is on the process of scientific exploration, on the scientists and caregivers, and on the lives impacted by their work. There’s room for improvement in how more technical aspects and key takeaways are conveyed. Call-outs or sidebars summarizing key concepts of an article might help readers who are short on time, or who just want a bit more than a teaser before deciding to spend 30-60 minutes on a story.