The gift of science, well-explained and beautifully packaged

Quanta Magazine is one of two websites published by the Simons Foundation, the vehicle for hedge fund founder James Simons’ philanthropic giving. Quanta focuses on mathematics, physics, computer science and biology. The other publication is Spectrum News, which covers autism research.

The Simons Foundation had more than $2B in net assets as of its 2015 tax return; Quanta is essentially one of its gifts to the public and does not rely on additional support. This makes it similar to Mosaic (reviews), published by the even more massively endowed Wellcome Trust. However, it publishes a lot more frequently: Mosaic tends to publish 2-4 long-form articles per month; Quanta publishes more than a dozen medium-sized articles in the same timeframe.

The name Quanta evokes the source of James Simons’ $18.5B fortune: quant investing. Simons, who worked as an NSA codebreaker at age 26, has been described as “the mathematician who cracked Wall Street” for his use of highly sophisticated mathematical models to predict profitable trades. His personal wealth derives from his hedge fund, Renaissance Technologies, which the MIT’s Andrew Lo called the “pinnacle of quant investing” and “the commercial version of the Manhattan Project”.

In 2014, Renaissance was interrogated by the US Senate for the use of an obscure loophole to avoid an estimated $6.8B in capital gains tax, an amount which far exceeds the endowment of the Simons Foundation. Its name has made the news for another reason: Renaissance co-CEO Robert Mercer is one of the biggest backers of Donald Trump’s anti-science Presidency and of the far right, anti-intellectual propaganda outlet Breitbart News, while Simons himself backed Hillary Clinton.

While the philanthropic impulses of the company’s principals are clearly contradictory, Quanta’s editorial beat is unlikely to conflict with Renaissance’s financial origins. Quanta itself has this to say about its editorial independence:

All editorial decisions, including which research or researchers to cover, are made by Quanta’s staff reporting to the editor in chief; editorial content is not reviewed by anyone outside of the news team prior to publication; Quanta has no involvement in any of the Simons Foundation’s grant-giving or research efforts; and researchers who receive funding from the foundation do not receive preferential treatment. The decision to cover a particular researcher or research result is made solely on editorial grounds in service of our readers.

Quanta’s stated goal is to “illuminate science”. In practice, this translates to articles that seek to arouse curiosity rather than controversy.

Where a magazine like Mosaic doesn’t shy away from in-depth articles about abortion rights in India and the US or sex workers in Mozambique, Quanta tends to write about questions in science that are both interesting and not highly politicized. Over a five-year period, I only found two feature articles with a strong political dimension: “A Physicist Who Models ISIS and the Alt-Right” and “How to Quantify (and Fight) Gerrymandering”. Zero articles about abortion, zero about transgender or homosexuality, one whose primary topic is climate change.

This is not a criticism; there surely is a place for a publication like this, which may succeed in reaching people across the political spectrum and promote a greater interest in science itself. Indeed, for the topics it does tackle, Quanta often succeeds spectacularly at making complex topics accessible and interesting.

This starts with the website design: Quanta is easily one of the most beautiful sites we’ve reviewed. The design leaves a lot of room for large-format images, while scaling well onto mobile devices, as well. Careful use of typography, color and whitespace gives the articles an aesthetic that brings together elements of print and the web in a very appealing manner. 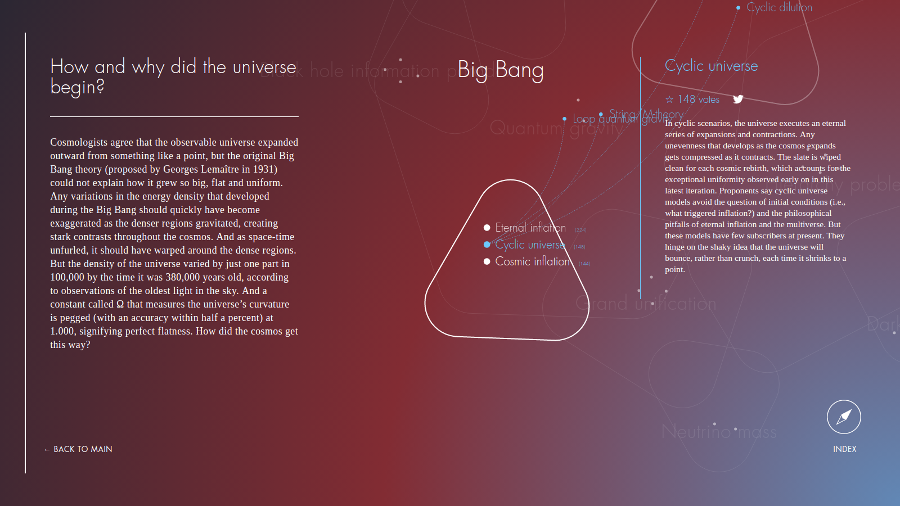 Quanta sometimes publishes interactive micro-sites, such as this explorable (and information-rich) map of current contenders for a “Theory of Everything” (Credit: Quanta Magazine. Fair use.)

Alongside recent articles and features, the front page highlights videos, podcasts, most-read articles, and “recommended features” (which includes articles from previous years). Individual pages include tags like “Microbiology” or “Podcast”. Overall the site is easy to navigate. Most content loads without JavaScript enabled, though some site features will break and leave behind empty boxes.

Quanta’s reporting on bacteria and biofilms is illustrative of how it approaches complex topics. The feature story, “Bacteria Use Brainlike Bursts of Electricity to Communicate”, recaps well-understood principles of chemical communication in bacterial colonies, and adds recent findings regarding ion channel communication.

The story is supported by quotes from multiple scientists (five from the United States, one from Spain and one from Italy). It includes a GIF animation that was carefully adapted from YouTube videos published by one of the scientist teams. The writing and approach is similar to Scientific American. In fact, the article was also syndicated to its website, and the author has bylines there and in other science magazines.

Quanta published a related feature titled “Seeing the Beautiful Intelligence of Microbes”, which shows many more examples of biofilm and slime mold behavior, again often employing large format GIF animations. This underscores the magazine’s willingness to go beyond the limitations of a print magazine. It’s a visually stunning feature that even readers with limited scientific interest may enjoy.

Expansion of Pseudomonas biofilm, an example of the kind of carefully produced GIF animation that makes many Quanta articles visually outstanding (Credit: Quanta Magazine. Fair use.)

A more elaborate example is Quanta’s 2015 map of “theories of everything”. It’s an interactive full screen overview of physics concepts like loop quantum gravity and the holographic principle, organized into the larger and overlapping areas of knowledge they relate to. This is the kind of resource you may end up returning to as you read about these topics in the news.

Some Quanta articles are accompanied by podcast episodes. Episodes are featured as a prominent “play” button at the top of a regular article for the relevant episode, which looks like an effective way to draw in listeners who don’t typically subscribe to podcasts.

There is also a YouTube channel. As with many other nonprofit publications, it reaches a relatively small audience of less than 10,000 subscribers, though some of the educational videos (e.g., “What is a species?”) are quite good. There are many education/science YouTube channels with orders of magnitude more subscribers, so perhaps a partnership would be more successful at reaching a large audience.

Quanta articles are frequently syndicated to other publications. They are under conventional copyright; in response to an inquiry, a staff member stated that there are no plans to consider a Creative Commons license. This is regrettable: much of the text, image and video content would be useful for open educational resources.

Like Mosaic, Quanta’s funding is secure thanks to a large endowment; it’s not clear why an open access license is off the table. As it is, we can enjoy Quanta for free, but we cannot re-use it and build on it without permission. It is a gift, but one with strings attached.

Quanta succeeds in its mission of making scientific topics accessible, often in a way that inspires further exploration and learning. It’s a beautiful website that makes good use of the web as a medium–through animations, large format photographs, videos, interactives, well-integrated podcasts, and so on.

I recommend following Quanta’s work to any curious person. While I would love to see it under a Creative Commons license, this does not impact the rating per our standard criteria. 5 out of 5 stars.