Review: Into the Breach

Into the Breach
www.wikidata.org/wiki/Q30591391
More reviews and information

Endless war against monsters, played out as chess with upgrades

Damn the Vek! Too stupid to communicate with, but smart enough to seek out human civilization wherever it is. In every timeline, the plague of giant insect monsters is close to wiping out what’s left of humanity. They breed underground and tunnel their way to the surface, only to bring death and devastation.

Insecticide won’t kill these bugs dead, but a squad of piloted battle mechs might. Or might not. Fortunately for the multiverse, humanity has learned how to travel between parallel universes, to attempt to rescue as many timelines as possible from the Vek.

Once more Into the Breach then, with another squad! Released in 2018, the second title by Subset Games after FTL cemented the tiny indie studio’s reputation for excellence. It takes plenty of inspiration from legendary turn-based strategy games (Advance Wars especially comes to mind), but still feels fresh and unique.

Much of this is due to the tightness of gameplay and mechanics. Assemble your team. Click. Pick a scenario. Click click. And: you’re in the fight. The map fits on one screen. You place your units. The enemy moves. The enemy starts to attack—and now it’s your turn.

A member of the Zenith Guard, a charge mech, finds its target. (Credit: Subset Games. Fair use.)

Depending on your squad and each mech’s buildout, you can destroy units, push and pull them, create hazards, create shields, and more. The array of skills turns every round into a small puzzle. How will you prevent the enemy from damaging your units, or killing civilians in a building, or destroying strategic targets?

Miscalculate, and the Vek might end up taking down the energy grid—game over. It’s permadeath, sort of: you can take one of your pilots to the next timeline. Too bad for this one.

From a limited number of ingredients, the game cooks up a fresh set of scenarios for you on each run. Some maps are especially difficult to beat without taking some hits to buildings; any damage you take to the energy grid carries over to the next map. You have to make some strategic choices between battles—which battles to fight, which upgrades to install—but most of the game is tactics, tactics, tactics.

The difficulty level is not quite as punishing as that of FTL or other roguelikes that celebrate starting over as part of the fun. At normal difficulty, you may notch your first game victory after a few runs, perhaps even on the first try. The Vek are as stupid as they are relentless. But the game will produce enough brain twisters to keep you coming back.

When you manage to shove a nasty Vek into the sea, or cause a chain reaction of monsters killing each other, it’s quite the payoff. If that isn’t enough, the game rewards you with unlockable squads, experience points, upgrades, and ambient dialogue that never gets in the way. 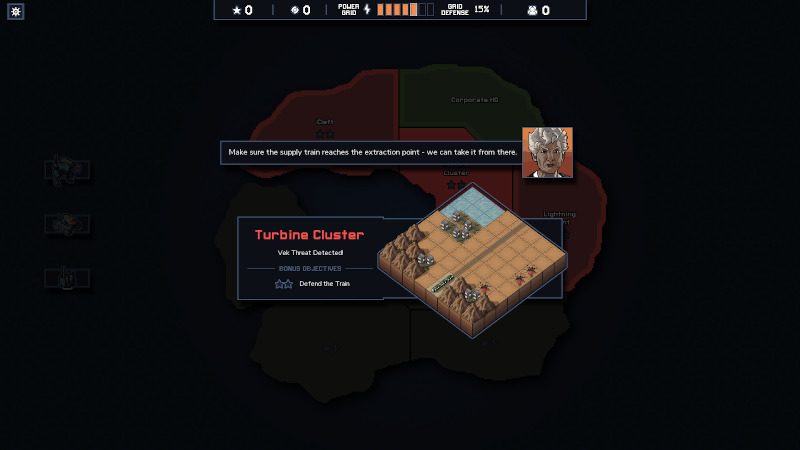 While it’s a very different game than FTL, it’s clearly built with the same design philosophy. The pixel art is more beautiful than FTL’s, but never extravagant; the UI provides help when it needs to and otherwise gets out of the way; moving your units feels as straightforward as moving the pieces on a chessboard.

In spite of the absurd premise and cartoonish physics (units can be encased in ice and unfrozen without damage), the game’s tone is mostly somber and dark; even victory is just a brief reprieve in an endless war played out across universes. The fun is in solving the puzzles the random number generator throws at you and kicking some serious Vek butt. If that kind of turn-based strategy sounds like your cup of tea, you can’t go wrong heading Into the Breach.