Slay the Spire is not the first roguelike deck-building game, but its massive success created a recipe many indie developers would soon try to follow.

The game doesn’t owe its popularity to its rich lore. You’re ascending a tower—excuse me, spire—fighting monsters on its many floors, to face a final enemy: a corrupted, beating heart. Random events hint at a larger mythology, but if you’re looking for a narrative adventure, look elsewhere.

The monster bestiary is also not what will keep you playing this game. While the art and animation are always serviceable, the array of cloaked figures, slimes, geometric shapes, and bands of thieves and gremlins gets a bit samey after a while.

What sets Slay the Spire apart is the tightness of the card-based battle mechanics, the unique play styles of the different characters, and the clever combination of cards and relics to make each run feel different.

You first play as the “Ironclad”, a powerful masked warrior. You navigate the spire across a path of your choice: you can face challenging encounters with large rewards, pursue random events, or plot the safest course to the level boss.

Monsters on the map indicate turn-based battles against one or multiple opponents. You draw cards from your deck in random order, and expend limited energy to play some of them. (Your opponents don’t have cards.)

The game will usually tell you what the enemy will do next: attack, defend, inflict status effects, and so on. This gives you a chance to prepare: if the enemy is about to do a lot of damage, you better have those defenses ready.

After each battle, you pick up new cards and other loot. As you ascend the spire, you’ll also find treasure chests and shops. Question marks on the map lead to random events. Those may have small negative or positive consequences, or give you dramatic choices: Would you like to play the rest of the game as a vampire? 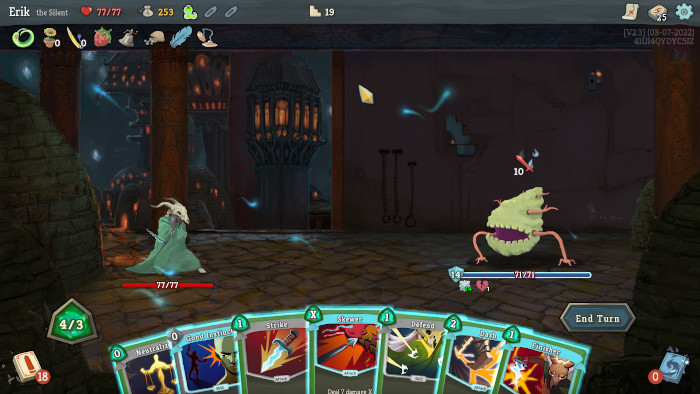 The Silent, one of the four playable characters, faces a Shelled Parasite. It will take carefully planned moves to penetrate the monster’s plated armor while minimizing inbound damage. (Credit: MegaCrit. Fair use.)

Among the items you can find are relics. These can significantly alter the game mechanics—for example, you might get extra energy every three turns, or boost the effectiveness of certain cards.

More and more content gets unlocked the longer you play—additional characters (four in total), cards, and relics. That means that a relic you unlock after 20 hours of play could be transformative for your next run.

The four characters offer fundamentally different play styles: The Silent is a rogue whose cumulative poison attacks can bring down the most powerful foe. The Defects is a sentient automaton who uses orbiting energy orbs to line up deadly chain reactions. The Watcher is a blind ascetic who uses “stances” to collect her energy and defenses (“calm”), then attack with twice the strength and vulnerability at the right moment (“wrath”).

Battles can feel terribly unfair—such is the nature of roguelikes—but there’s enough strategic depth to reward repeated play. You will get better, learn to avoid unnecessary risks, and achieve easy defeats in battles that seemed unwinnable before.

To keep you playing, the game never ceases to throw new challenges your way, and that’s without taking into account lovingly created mods like Downfall, a fan expansion that lets you play as the bosses.

After 40 hours of play, having faced (but not defeated) the game’s ultimate boss and unlocked most cards and items, I’ve decided to put Slay the Spire down again for now. But I know it’s sitting in my library, ready to give that dopamine rush that only a perfectly executed game can.

If you like the genre, I also recommend Krumit’s Tale (review), Iris and the Giant (review), and Dicey Dungeons (review). All were released after Slay the Spire, and each brings something new to the genre.