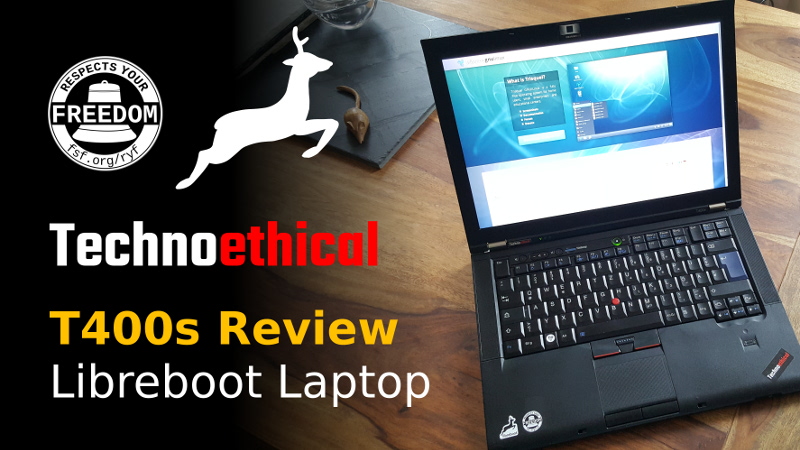 This is just to share my experience. (I am in no way affiliated with Technoethical.)

I am a satisfied Debian user since I moved away from Windows in 2008. Back then I thought I could trick the market by ordering one of the very few systems that didn’t come pre-installed with proprietary software. Therefore I went for a rather cheap Acer Extensa 5220 that came with Linplus Linux. Unfortunately it didn’t even have a GUI and I was totally new to GNU/Linux. So the first thing I did was to install Debian because I value the concept of this community driven project. I never regretted it. But the laptop had the worst possible wireless card built in. It never really worked with free software.

In the mean time I have learned a lot and I started to help others to switch to free software. In my experience it is rather daunting to check new hardware for compatibility and even if you manage to avoid all possible issues you end up with a system that you can not fully trust because of the bios and the built in hardware (Intel ME for example).

Therefore I am very excited that you can actually order hardware nowadays that others have checked for best compatibility already. Since my old laptop got very unreliable recently I wanted to do better this time and I went for the Technoethical T400s, which comes pre-installed with Trisquel.

I am very pleased with the excellent customer care and the quality of the laptop itself. I was especially surprised how lightweight and slim this not so recent device is.

When the ThinkPad T400s was first released in 2009 it was reviewed as an excellent, well built but rather expensive system for about 2000 Euros. The weakest point was considered the mediocre screen. The Technoethical team put in a brand new screen which has perfectly neutral colours, very good contrast as well as good viewing angles. I’ve got 8 GB RAM (the maximum possible), an 128 GB SSD (instead of 64 GB) and the stronger dualcore SP9600 with 2.53 GHz (instead of the SP9400 with 2.40 GHz) CPU. In addition I’ve received a caddy adapter for replacing the CD/DVD drive with another hard disk. And all this for less than 900 Euros.

This is the most recent laptop of the very few devices worldwide that come with Libreboot and the FSF RYF label out of the box. The wireless does flawlessly work right away with totally free software. This system fulfills everything I need from a PC as a graphic designer. Image editing, desktop publishing, multimedia and even light 3D gaming. Needless to say that common office tasks as emailing and web browsing do of course work flawlessly. To get everything done properly only few people do actually need more powerful working machines.

The battery is a little weak

The only downside for power users on the go might be the limited battery life of about two hours with wireless enabled. It is possible to get a new battery which might extend the life to about 3 hours but because the battery is positioned on the bottom front you can’t use a bigger one. (The only sensible option would be a docking station, but I was never fond of those bulky things that crowd my working space even when the laptop isn’t on the desk.)

Over all this is a great device that just works with entirely free software. I thank the Technoethical team for offering this fantastic service and I encourage you to support ethically motivated companies like Thechnoethical instead of getting your hardware bundled with proprietary software because without investing money in technology we want we will never get to the point where it is easy and normal to chose free systems right from the start without the need for additional work to liberate yourself by becoming a person that is technically more skilled than average users are.

I can only recommend buying one of those T400s laptops from Technoethical.

When I started my video podcast I needed a suitable microphone. The Samson Meteor Mic received a lot of good reviews, so I went with it (you can hear it in all episodes except the first one). It uses a cardioid pattern, meaning that it picks up most sound in front of the mic. Indeed, ambient noises that are far away don’t get a lot of pickup, so the occasional background noise won’t disturb your recording or call.

The mic comes with a mute button and a headphone jack/volume knob (so you can monitor your input without latency). It is chrome-plated and looks quite nice on any desk. The three legs are foldable, so it won’t take up a lot of space in your laptop bag. It also has a mic stand adapter, which I haven’t used.

This USB mic works fine under Linux (tested with the last three Ubuntu releases); it gets immediately recognized. You may just need to activate it in your sound preferences and in some applications (browser may require a restart).

As of this writing the Samson Meteor is priced at $55 on Amazon. That’s a pretty good deal for a very high quality device.

All features supported out of the box on most distros. (2014 edition)

The wacom intuos drawing tablet is fully supported out of the box on ubuntu and other distros with the xserver-xorg-input-wacom package installed. The tablet is configurable through the xsetwacom command line tool. While the cli tool is not as user friendly as the GUI tool for windows and macOS it is feature complete and can configure the tablet buttons as well as many other settings for the tablet.

The steelseries Apex 350 is a gaming keyboard complete with a numpad, media keys and 22 extra macro keys as well as 5 zones of customizable backlight LEDs.

On Linux all the basic keyboard functions on the steelseries Apex 350 work fine. steelseries provides a program for enabling the extra macro keys and customizing the LED colors. Unfortunately this software is only available for Windows and MacOS however thanks to tuxmark5 there is a tool for using this keyboard to its full extent.

Conclusion: The steelseries Apex 350 is a nice gaming keyboard which through the use of a 3rd party tool can be completely utilized on Linux.